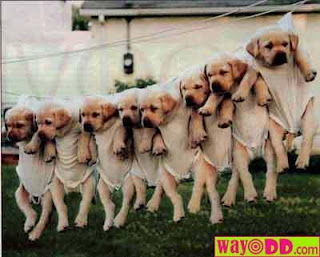 No matter what it does, Bethlehem's Zoning Hearing Board is going to make somebody unhappy. Neighbors opposed to an Elias Farmers' Market expansion took their case to Court. So did developer Abe Atiyeh, after zoners nixed his luxury apartment proposal at the corner of Center Street and Dewberry Ave. And now it's official. The Zoning Hearing Board has gone to the dogs.

It all started when Tara Uhnak asked them, at their September 28 meeting, to approve her pet-sitting business at 1887 Lincoln Street. Representing Uhnak, Bethlehem Attorney Lisa Pereira presented a compelling case. Uhnak already has a fenced in-yard, and is unable to have more than 6 animals of any kind at her home, thanks to another ordinance. She never takes for than one family's pets at any given time, and would first have a meet 'n greet with her own two dogs to make sure they socialize well.

Uhnak is a DeSales biology grad, and has been working in vet offices since she's been 14.

When one neighbor pointed out that a child might stick his hand through the fence and be bitten, Uhnak told her she's insured by Pet Sitters International, and that the fence is located within her boundary lines. "Then I'm for it," answered the neighbor.

Thomas Bellesfield, who lives right across the street, told zoners he walks and runs by Uhnak's home all the time. "I've never encountered a problem with odor," he stated, adding that it's the "nicest house in the neighborhood."

But zoner Ken Kraft asked, "What if I had a pack of rats and was going on vacation?" No problem, answered Uhnak.

Zoner Bill Fitzpatrick then warned Uhnak, "He's been known to tote a 10' rat," referring to an inflatable rat used by unions from time to time. Kraft, who is a union agent with the Painters' Union, responded, "It's twenty feet."

After a brief executive session in which zoners could be heard discussing ferrets, guinea pigs and goldfish, they granted Uhnak's appeal unanimously.

The joking continued in the next appeal, when Larry and Joan Haas sought a variance at their 1034 N New Street property for a garage that would be attached to and considered part of their property. They told zoners there would be no commercial use, and it could not be used as a living space because there were no utilities.

Louis Zsido, with his right arm in a sling, wanted to testify in support of the Hass family.

For their final case, zoners would hear from Pamela Rodweller, whose name was pronounced Rottweiler. "Yeah, I get that a lot," she said. But as a result of a mix-up, Rodweller was never supplied with the placard to place on her property and provide notice of her appeal for a small addition to her home.

Zoners apologized to Rodweller, and told her they would consider her matter first at their next meeting.
Posted by Bernie O'Hare at 10/01/2011 12:00:00 AM