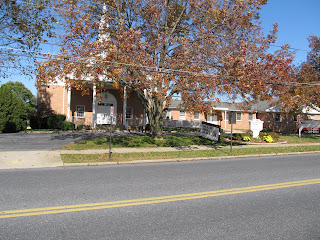 Developer Abe Atiyeh has asked Bethlehem zoners for a "special exception" to convert the vacant Calvary Baptist Church, located at 111 Dewberry Avenue, into a 70-bed voluntary inpatient substance abuse center. The facility, which borders a baseball diamond at Bethlehem Catholic High School, would be operated by The Malvern Institute. During a hearing on October 19, Atiyeh attorney Blake Marles was only able to call four witnesses during a five-hour hearing as a result of numerous concerns raised by at least ninety people at Town Hall.

When testimony resumes on October 31, the City of Bethlehem might be raising some concerns itself. Six Bethlehem residents, calling themselves the North Bethlehem Action Committee, have asked Mayor John Callahan to intervene in what the consider a "ludicrous" proposal presenting an "extraordinary danger" to students at Becahi, who are vulnerable.

Members of this Committee include Bill Moran, a Northampton County judge who recently stepped down after a long and distinguished career on the bench.

In the meantime, Blake Marles has made a request of his own. He sought and obtained a subpoena from the Zoning Hearing Board to compel the presence of John P. Petruzzelli, principal at Becahi. He has previously told zoners he expects to call at least seven witnesses.
Posted by Bernie O'Hare at 10/27/2011 02:08:00 AM

Good for Judge Moran. I hope he knows that Long Dem, Ken Kraft has ducked this issue. He posted on this little read blog that he supports Atiyah's drug addict center.

Of course he didn't go to the public meting and now won't cast a public vote.

This is going to be your county council representative judge. Must make you feel good about the future of the county.

A Ken Kraft impersonator, knowing that this is a divisive issue, posted that Ken supports the rehab. I was contacted by Kraft and asked to delete the comment, which I did. As a member of a quasi judicial body, I believe Kraft has no opinion on this topic. Also, I do not believe he has accepted any Atiyeh money.

He ducked a highly controversial issue and you know it Bernie. You have made him a mancrush for some unknown reason. The guy is a Long Dem lie McClure and Barron.

On one of the most important issues in Bethlehem to come before his board, he bails. That does not bode well for his tenure on county council.

It's your opinion that he ducked a controversial issue. It's not mine. Moreover, there is no justification for impersonating this candidate and ascribing views that it would be improper for him to hold, as a member of the ZHB. If you have to resort to dishonest behavior you've already lost.

That confirms he is a new mancrush. What makes you think anon 12:30 impersonated him.

Bottom line is if this were Dertinger, McClure or Barron you would be on this like stink on shit.

You are giving the guy a pass. Only you can give the reason why. Up to now you have been sidesteping.

Ken Kraft was previously impersonated in a post about the rehab. I know this because he emailed me to tell me that and asked me to delete the impersonator. I did not accuse anon 12:30 of impersonating Ken Kraft, but pointed out that he was impersonated and that is a shitty way to argue against a rehab center or Kraft.

But since this is a "little read blog," why the hell are you here? Go somewhere else, or start your own.

I read your blog all the time and I agree on this issue. ken Kraft ducked a politically volatile issue. You have been around the block and know how this game is played. So the concept of hypocrisy on this deal does have a smell factor.

That does not bode well for his future as a county councilman. You were bluffed on the Barron meister for a few years, I fear you are once again viewing another Long Dem through starry eyes.

Once on council he and McClure plan to make Stoffa jump through hoops.

You might be right. You might be wrong. I do not judge candidates based on their political party affiliation. And I certainly don't ascribe motives to them that I have no way of knowing.

Anon 2:37
Perhaps you should get in touch with Kraft and find out why he couldn't attend the meeting instead of guessing. Also-what makes you think McClure will win the election?

Ken Kraft showed the Long Dem he is by the sneaky way he avoided this tough issues. Rather than standing up and accepting responsibility of the position he hid for political reasons.

Please remember that Judge when you decide who to vote for on the 8th.

Do we need more of that behavior on county council?