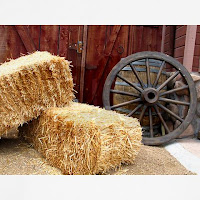 Back in 2002, Northampton County voters decided overwhelmingly to borrow up to $37 million to fund open space. As County Council readied itself to float a 30-year bond, I filed suit to stop it, arguing that referenda on capital projects is illegal.

I also spent afternoon-after-afternoon, handing out flyers about the attendant costs of a 30-year loan, which struck me as a poor way to fund open space. I was also concerned that the money would be used to preserve small, gentleman, farms owned by doctors and dentists.

The person fighting against me in this effort was none other than the current County Executive, John Stoffa. It was a vicious fight. Don't tell him, but I prank-called him all the time, and would ring his doorbell and then run off. I nailed him when he forgot to file a campaign expense report on time, but then I screwed up and later forgot to file one myself.

Despite this overwhelming victory, no open space bond was ever floated. And when Stoffa became Executive, he opted for a pay-as-you go plan instead of a big bond.

In the past seven years, his plan has generated more money for open space than could have been made available by a 30-year bond.

In a hand-out at Monday's Finance Committee, Stoffa notes that, over the past seven years, the County has spent nearly $15 million of the $37 million set aside for open space. The lion's share of the money, $6.5 million, has gone to farmland preservation. But other open space projects have been funded, too.

Stoffa's pay as you go plan in seven short years ect . We are ahead of the game I don't think so , no tax raise in 7 years because nothing has been done no bridge work, no light standerds repair, no work being done on county owned buildings except the courthouse, for years Gracedale has been neglected. If we don't keep then in good repair just sell then. Real smart deal. And we can't take care of what we have but go for a DUI center / jail we have money for that RIGHT ?
OPEN SPACE IS A GOOD THING but keep track of the rest of the county

This is all nonsense. There have been bridge repairs every year. There has been work to outside buildings, even Gracedale. And yes, there will be a new DUI center in West Easton. The county jail was built in 1871 and is a lawsuit waiting to happen. The new DUI and treatment center will not only address that overcrowding, but will reduce recidivism, lowering the tax burden to the County. As for the complaints about the impact fee being paid by the County, the County will pay no impact fee.

You are wrong. Its old and dingy, but people work there and prisoners live there. If it were a lawsuit waiting to happen, it would have happened already..over and over and over again.

If Norco wants to take care of its recidivism rate, they need to leave the jail alone, \//

Once the fancy new West Easton Hyatt is up and running, the recidivism rate will only go up...watch and see. I'll even wage a bet.

Why are we giving money to municipal parks. More nonsense from the Stoffa gang that can't manage straight.

During these budget meetings the county council will just sit there like they do and nod their bobble heads while the Stoffa hacks sling the crap.

I would like to see some empirical factual data about how the other 66 counties maintain their aged county jails. Are they all falling apart, or just Norco?

What is the purpose of the new DUI center? What kind of treatment will be rendered there, that is not being done now at the main jail?

Is this new facility simply a way to empty the beds, so that the jail can be renovated? Do I see a massive bond being floated in the future for these renovations?

I tend to share your opinions on this Bernie. I, too, was not in favor of the bond coming semi on the back of the $111 million mega-bond before it. And I knew of a land owner who had land in some sort of state "preservation" program in Monroe County that eventually did not stop homes from ending up consuming the property. That said, I also agree with your assessment of how Stoffa has handled it if we were to have it.

The prisons and treatment centers are a separate subject, so I'll leave that one alone.

Is James Spang the Dem Committee Rep the same James Spang accused of grabbing a male patron of the Sands in the groin?

It will cost the County $1.8 MM next year, but I believe much of that is start up. It will not be a recurring expense in that amount.

"Why are we giving money to municipal parks. More nonsense from the Stoffa gang that can't manage straight."

No money is going to municipal parks. It is county parks only. If you want to bash someone, try to get your facts straight.

"Once the fancy new West Easton Hyatt is up and running, the recidivism rate will only go up...watch and see. I'll even wage a bet."

Oh, someone who refuses to identify himself is an expert on recidivism and is willing to wage a bet, except ... hw the hell do you collect from an anon?

There are numerous studies showing that treatment reduces recidivism, but you're entitled to be an asshole and believe what you want. Just as the indigent seniors at Gracedale are entitled to be treated like human beings, so are the inmates of a county jail.

3:55, That data has been presented at several meetings over the years. The jail IS in need of renovations, and you can't build on top of inmates. It is illegal. Eventually, some changes will be made. But the West Easton facility is basically a DUI and treatment center, designed to reduce recidivism. The way we treat them now is not working. 65 cents of every tax dollar goes to pay for the back end of crime. If you reduce recidivism, you ease the burden on the taxpayer. And there have been lawsuits. Sooner or later, a federal judge will do what happened in LC.

There is a line item of county money to municipal parks. by the way, not all the money Stoffa got from his tax has gone to open space. Do the math. More bullshit from the masters of BS.

"The new DUI and treatment center will not only address that overcrowding, but will reduce recidivism, lowering the tax burden to the County."

I wanted to post earlier however was called away.
In that elapsed time you reposted to someones comment.
Referring to your statement on recidivism. I would, now that you have cited them, like to see your source for the studies showing these rates will decrease based on having a new facility and additional treatment. I have been searching and can only find sources that show the rates are fairly stable despite interventions, and treatment.

And allow me to ask as I don't know if you look back in your postings. Did you ever find the cause for the excess $45000 the bus drivers receive. Please post the answer to this question in the appropriate section.

Thank you for your time.

Check out this feasibility study regarding inmate fees. The study concluded that inmate fees increase recidivism rates, and increase local taxes in order to implement and enforce the fee.

Anon 8:51, Who gives a shit about inmate fees? I've already explained that is between Atiyeh and West Easton. The County will not be charging it.

Anon 8:32, There are numerous studies and news accounts.

"There is a line item of county money to municipal parks. by the way, not all the money St"

Learn how to read. It''s for county parks, asshole.

Who gives a shit about inmate fees?

If you think inmates give a damn about the fees assessed to them, think again.

The poor inmates have the fee paid by taxpayers. All the studies cited are industry flaks and social liberals. Addiction centers like this are big business. They have never reduced crime. Recidivism rates in general are similar to area's with no centers.

Someone forced into treatment is an addict not wanting treatment but seeing it as easier time than prison. Problem is they eventually come back and need a real prison.

Stoffa has avoided dealing with the real issue of the prison and is pushing another of his hair brained social engineering schemes. Attiyeh gets a nice piece of the money pie as does the company paid to do the treatment. This will come to millions of county taxes a year and the prison will still need to be addressed.

Incompetence rules in Northampton County. O'Hare will stay with his mancrushs Stoffa and Angle, pedalling their crap till the end of time.

Thank you for those links. I was performing the search wrong.
I can however sympathize with the locals where the place is to be located. Although it seems it will be a positive program for the community as a whole.
Good luck with your angry mob.

Heh, heh. I am used to them. For several years, Stoffa tried with different municipalities. West Easton is a perfect fit. That is the only place that did not throw up roadblocks. It will also be compensated for the impact of this treatment center, but not by the County.