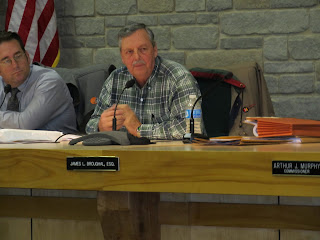 Bethlehem Township Commissioner Tom Nolan is seeking reelection to a $4,125 part-time position as the First Ward's voice. From the Planning Commission to the Board of Commissioners, he's served in one capacity or another for over thirty years. He's the Township's voice on the Gaming Authority. And for the past year, he's volunteered to serve on the library board. But colorful developer Abe Atiyeh, who is pretty much pissed at everyone in the Township, from his own neighbors to zoners to commissioners, has a posse of candidates getting ready for a takeover. His own wife, Nemo, is taking aim at Nolan.

Now I'm not so sure about his neighbors, but Abe has every right to be angry at Township officials. Commissioners spurned him when he pleaded for homeless shelter money. Atiyeh made a contribution himself. Zoners continually rejected a special exception for a treatment center in an industrial park, near nothing except a few dead skunks. He was forced to go to court at least three times.

So Abe organized a team of candidates, from his own wife to Martin Zawarski, to clean up.

There's nothing wrong with that, either. He has every right to use the electoral process. It's the American way. Even those gigantic green and white signs, touting Nemo Atiyeh, are fine. They make "Finding Nemo" easy.

But in a recent mailer complaining about increased traffic in the Township, Atiyeh goes too far and actually blames Nolan for a development that he actually opposes. Developer Michael Perrucci has proposed a 420-unit apartment complex off Route 191, right next to Housenick Park. Nolan is one of two Commissioners who has publicly stated he opposes the plan. Yet in the Atiyeh mailer, Nolan is blamed for that project as well as another development that is only in its early planning stages.

Abe is entitled to express his opinions about Commissioners, but he's not entitled to his own facts. Atiyeh complains Bethlehem Township is "stuck in traffic, thanks to Tom Nolan." He laments "out of control development," but thought nothing of proposing four three-story apartment buildings in an institutional zoning district in Bethlehem. When that was rejected, e pulled a LULU (locally unpopular land use), and switched to a 4-story, 125-bed, inpatient detox center and psychiatric center, just as stone's throw from Bethlehem Catholic High School.

True, Becahi has been having trouble fielding a good football team for the past few years. They're depressed, but they don't need a psychiatric hospital. They just need Coach Stem.

And Bethlehem Township residents should be told the truth instead of beng misled into thinking that Nolan supports a development that he has publicly opposed.
Posted by Bernie O'Hare at 10/18/2011 12:56:00 AM

Are you sure Atiyeh recruited Zawarski? I asked Zawarski that question and he denied a relationship with Atiyeh.

Bernie
Maybe you'd want to do a blog about municipalities celebrating a Week Without Violence. Shouldn't they focus on every week being one
without violence?

Are you sure Atiyeh recruited Zawarski? I asked Zawarski that question and he denied a relationship with Atiyeh.

After attending a lot of government meetings where Atiyeh presents his multiple zoning variances, I'd deny such a relationship too!

Where are the election police?

Atiyeh has signs that are illegally nailed to telephone poles and PENDOT road signs:

I don't get out much but I'm sure there are more!

Typical behavior of an I don't give a shit what the law says wannabe politician...

"Are you sure Atiyeh recruited Zawarski? I asked Zawarski that question and he denied a relationship with Atiyeh."

I've heard that from several sources.

In fairness, I should have talked to Zawarski.

Hey, I'm certain Marty knows Atiyeh and all the rest of the developers in the area! So what? I'm also very certain Marty will be fair with everyone ever under consideration for any Commissioner decision within the Township. Marty and entire Zawarski family are, always have been, above board as possible. Please consider voting Marty into public office in Bethlehem Township. Would be good for the community is my honest opinion.

Your point is well taken, Larry. I stand corrected.

I will not vote for Marty or Nemo, my choice.

Any time you have these type of agenda's, bias will get in the way of the taxpayers best interest!

Heaven forfend that we elect business people who have pro-business agendas to these local boards! I mean, when you are hitting tough economic times, let's keep the successful business people out! That'll solve our problems!

I share the irritation of Anon 8:30. I guess I would only add that if people only see your signs littering roadways where no permission was sought nor granted, and never in yards, that kind of says something. At least the others (Zawarski, Murphy, Nolan, Comer, Barnard) I have also seen in real (non-develper related) yards. And after Joe Long Dems threaten municipalites with lawsuits several years ago about their "first amendment rights" municipalities just put up with the litter, regardless of candidate.

However, of more substance. It is kind of ironic, beside the blatant lies on the flier you mention, but I can't help but wonder if Abe (Mr. not Mrs.) is behind the development on 191 that was a Board discussion item, but was never discussed since the "developer" did not show. Since there is a realty sign, and two large Atiyeh signs on the property makes me wonder.....would need rezoned if pursued to allow for the traffic-creating development Mrs. Abe's fliers railed against in her flier. Really, no need to wonder because the address of the developer, Pennsylvania Venture Capital, is the same as Whitehall Manor Inc, of which Abe is the CEO and Mrs. Abe is the President. So, would Mrs. Abe follow her fliers and vote against the interests of Mr. Abe if elected to the Board? Of course, if you are not one of several regulars to the meetings, I am sure there are those out there who will buy the fliers hook, line, and sinker.

Abe sometimes has some valid points that I agree with, regardless of what I think of his tactics. But the obnoxious littering of the community, and blatant lies....oh well, voters always get the governments they elect good, bad, or indifferent. Hopefully enough are paying attention.

Received a Zawarski flier in the mail today about wasteful spending. What spending. The township can not even fix the community center!! Ever go into that place? They also have only raised fees and taxes once in 10 years and have laid off alot of staff. Development has not occurred in the last 4 years. Their other equipment is old and dated. Maybe Bernie ought to get to the real truth of what is going on in the Township. Divestment is happening with this current board. How much more accountability can Zawarski show??? He will need to raise taxes or shut the place down.

Nemo's signs are gigantic and gawdy as heck. There was one stapled on a telephone pole on 191 and the road to NCC. Abe must be paying homeless people a buck an hour to plaster those monstrousities eveywhere.

Wait, developers are telling me that the current commissioners over developed? Bwahahahaa....

From the meetings I've been to, Nolan seem like a very reasonable and competent person.

Received a Zawarski flier in the mail today about wasteful spending. What spending. The township can not even fix the community center!! Ever go into that place? They also have only raised fees and taxes once in 10 years and have laid off alot of staff. Development has not occurred in the last 4 years. Their other equipment is old and dated. Maybe Bernie ought to get to the real truth of what is going on in the Township. Divestment is happening with this current board. How much more accountability can Zawarski show??? He will need to raise taxes or shut the place down.