Kraft, Lutes Out on Bethlehem ZHB 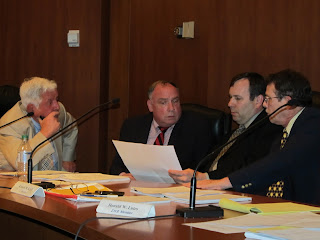 Since 2007, Ron Lutes has been a member of Bethlehem's Zoning Hearing Board. He's been the odd man out, who would vote only if there was a conflict or another zoner was unavailable. He attended every meeting. As a realtor and assessor, he's obviously knowledgeable. Now, after four years, he finds he's the odd man out again, overlooked by Mayor John Callahan in three new appointments. Given the controversy that seems to follow zoners everywhere, maybe Lutes should thank him.

Three new zoners were unanimously confirmed by City Council last night, and will now have to learn to dodge the slings and arrows that will be aimed at them by developers and residents alike. They will join Chairman Gus Loupos and Bill Fitzpatrick, who remain on the board.

Who are these lucky people?

1) Linda Shay Gardner. - According to her webpage, she's a family law lawyer. Since 1985, she and her husband Neville have owned Donegal Square, a popular Irish shop on Main Street.

2) Michael Santanasto. - A solo practitioner for the past ten months, Santanasto was an associate with King Spry. When he worked at that firm, Santanasto concentrates his practice in the areas of commercial real estate, estate litigation and business. He's a grad of St. Joe's and Rutgers.

3) James Schantz. - Another legislative aide crashes his way into local government, waiting for an opening in Harrisburg. This one works for State Senator Lisa Boscola, ran for District Judge in 2009, and lost.
Posted by Bernie O'Hare at 1/18/2012 01:09:00 AM

I am guessing the Rajah of Rezoning put the fixin to Callahan to get a green light on is proposals to Allentownize Bethlehem?

Abe must be thrilled? Those donations are paying off?

JC does know how to stack the deck.

Leave Jimmy be. He's low-profile, quiet, efficient, and has always been effective at constituent service.

The issue of legislative aides of any party being allowed to work for a government official and the public at the same time needs more discussion or as our Bernie would say, "Can a guy have two loves.?"

Leave Jimmy be. He's low-profile, quiet, efficient, and has always been effective at constituent service.

No no one should leave any candidate alone! If someone cares to throw their hat in the political ring, they must be willing to stand strong and tall next to it. No way.

Can an elected official also be on the Zoning Board? If not, I have to wonder if that is why Kraft is out.

Apparently, the answer is yes.

6:19, I am leery of anyone who works for a state office holder and who also is a participant of local government. Boscola has pulled in reams of money, over the years, from Pektor and other developers who seek zoning changes. A developer who wants something done could see her and ask her to pressure Jimmy, the person you want me to leave alone.

I don't think this is a good idea.

But amazingly, not a single question asked or eyebrow raised.

The voters get what they want. They have given City Council two more years of immunity.

City Council has even stifled the ability to have a give and take during courtesy of the floor. No more banter. Just a one way dialogue. The time is now called Public Comment. Let the public blow hot air. They can't touch us for at least two years. Just part of the benefit of capturing the brass ring.

Now everything has to be done behind closed doors, even actions requested by the citizenry.

Al, I don't understand your comment. Can you elaborate?

Again Al, you're true colors shine through and the Idiot flag is raised proudly

To Anonymous 12:17 PM: I would gladly respond to you if you had a enough chutzpah to mention your name. Stay brave! Control you anger, and stay on your meds.

I believe what Al is saying is that council pays absolutely no attention to the five minute limited comments from concerned citizens. Nothing but blank stares and playing with their cell phones. These so called council people are nothing but a disgraceful click. There is no leadership here.

I spoke w/ Al and he was referring to recent changes in courtesy of the floor, where Council members will no longer have exchanges with the public.

hey, it's more than fair to question Jimmy's impartiality, but it didn't sound like that was your issue.

That's pretty much my concern about ALL legislative aides, whether it is Wayne Grube or Jimmy. I have heard from several people that he is a nice guy, and my objection to him is NOT personal. It's not really an objection, but a concern that should be raised so he can answer it publicly, don't you think?

Hey Bern......I know for a fact that once again the zoning board has been stacked(with the exception of Jimmy) in JC's favor Ken Kraft recommened a very well known City businessman for board appointment that was totally ignored...JC only wants control and has been bullshitting this city and it just continues...I can;t wait until 2013 JC's reign will be over..but wait rumor has it he is the hand picked successor of none other than.......You quessed it...JEFF PARKS!!!

Callahan is running for Northampton County Executive. God save us all.