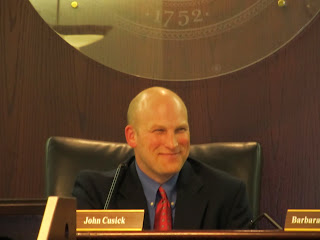 For eighteen minutes, Northampton County Council had no President during their annual reorganization meeting yesterday. Four Republicans had voted for Republican John Cusick, while all four Democrats had voted for Democrat Lamont McClure. Deadlocked, they recessed to wait for a tardy Bruce Gilbert, Council's fifth Republican, to appear and cast his vote for Cusick.

Until that happened, Peg Ferraro briefly took over the reins of County Council as Acting President. After all, she had just been unanimously elected VP. Ironically, after a straight party vote, Ferraro told Council that they should forget about the Rs and Ds behind their names, and focus instead on good government.

Ferraro also claimed the new Council, which consists of newcomers Ken Kraft, Scott Parson and Bob Werner, will bring a "new era of civility and respect for the taxpayers who honored us with their vote." That's a not-so-subtle slam at former Council member Ron Angle, who was defeated at the polls in November on that very issue.

Angle was at home, feeding his cows, when Ferraro unleashed her verbal volley. His only concern was, "Are the Ten Commandments still hanging on the wall?"

Speaking of the Ten Commandments, County Council apparently has a new Chaplain. Michael Dowd, a real minister, was also swept out of office last November. Too lazy to call area clergy members to lead Council in prayer before meetings, Cusick always relied on Dowd.

With Dowd gone, Cusick called on none other than the Fake Rev to seek Divine Guidance. Yep, Cusick has ushered in a new era of civility by calling a phony who has claimed Jesus told him through a TV set that he sent tornadoes to kill innocent children in Alabama because of President Obama's Israeli policy.

Oh yeah, Angle is Satan, too.

I refused to participate in a phony prayer by a false prophet who must have alienated every Jew in the room with his numerous references to the "glorious name" of Jesus.

Once elected Council Prez, Cusick announced his agenda, something that apparently slipped his mind in his first year as President. First, he wants to deal with the swaption and a possible bond refinance. Second, he wants a lease for the treatment center in West Easton, that can be voted up or down. Third, he wants an advisory board for Gracedale, and claims he's been contacted by several people about it already. Fourth, he wants an archives building, claiming it is an "absurdity" to spend money to lease space. Finally, he wants to consolidate human services.
Posted by Bernie O'Hare at 1/04/2012 01:25:00 AM

Consolidating the Human Services buildings is a waste of money. The Bechtel building in Bethlehem is in great shape and the County would be foolish to sell it..If they want to get rid of the Wolfe building and find another home for those folks fine. Leave the Bethlehem building alone..

Let the rearranging of the deck chairs on the Titanic begin!!!!

I have deleted a number of anonymous personal attacks and will continue to do so, especially those aimed at people who hold no public office. If you want to make cowardly personal attacks, do it on the Gracedale blog.


Angle was at home, feeding his cows, when Ferraro unleashed her verbal volley. His only concern was, "Are the Ten Commandments still hanging on the wall?"

If you are going to delete comments about people who are no longer in office, why keep referrencing them?

Why not let Mr. Angle rest in peace?

It's good to see that Peg showed up. Her attendance record is akin to stealing from taxpayers. Will she come back to another meeting?

Attendance isn't an issue, or there would have been a 2011 work horse article, right bernie?

Actually, I have the research done on that and will be posting it soon.

I am glad that the good Rev. Martinez was asked to give the prayer. he is a true man of God and his prayer is much needed in Northampton county.

I feel that they should not have a prayer at all to open the council meetings, a moment of silence or reflection would be more "inclusive" to all faiths than the jesus jesus jesus that was called for last night.

A pretend reverend gives a pretend prayer in front of a pretend body that pretends to do work. Perfect.

That was a very no class move on your part Bernie. I realize you hate the Rev Martinez and the Gracedale people but a prayer is a prayer. You can respect the prayer without looking the the Rev. Your actions were in a word, childish.

You showed people why you are universally despised and why you are not considered emotionally healthy.

delete, delete, delite
you are very good at that bernie

Not sure why Cusick called on the Rent-a-Rev for yesterday's invocation. Perhaps he thought this act of generosity would win him Parsons' vote for prez. Who can forget the classy scene at Parsons' victory party with the Rev yukking it up with Jester James and a tipsy county solicitor? In any case, the Rev seemed surprised to be called on for divine intervention. he proceeded to offend any and all non-Christians in the audience with his evangelical blessings. A bone-head move on Cusick's part. At future council meetings he should ask council members to offer an invocation or invite Dowd back as council's official chaplain.

Last time I checked, Northampton County is still part of the United States. As an American, I have every right to refuse to participate in any form of worship or prayer, especially during a public meeting. And I will not stand for a phony prayer offered by a false prophet. I even have the right to go along when others mumble the pledge of allegiance and then proceed to defy the principles upon which this country was founded.

As an American I have asked that the ten commandments be taken out of the county council chambers. It is not a religious institution. They should be sent back to the party that placed them there.

I am sure they are more needed by said party then the county.