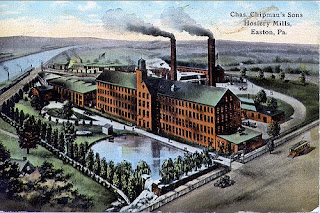 A 10 year lease for a treatment facility for DUI offenders and deadbeat dads was unanimously approved by Northampton County Council's Finance Committee yesterday. The $447,125 lease with Abe Atiyeh is for a 24,500-square-foot facility (the former Chipman Mills) at Main and East Streets, located in West Easton. That's $18.25 per square foot. It includes 2 five-year renewals, as well as an option to purchase at the end of twenty years. A tentative start daye is fixed for March 1, although Solicitor Karl Longenbach told Council that a Certificate of Occupancy will have to be obtained first, so a more realistic starting date is sometime in May.

Noting that Atiyeh has already sunk $3 million into this project, Longenbach told Council it is "certainly a lot less expensive than what you would have to pay to expand the prison."

Executive John Stoffa told Council the purpose of this facility is to reduce recidivism, which currently is at 69% at County jails throughout the state. He noted that, with treatment, that rate drops to 22%, and ends up saving the County the cost of warehousing repeat offenders.

"You should be commended," McClure told Stoffa, noting that the amount being spent on this lease is roughly the same the County was spending to ship inmates to other jails throughout the state.

The only concern, raised by Council member Tom Dietrich, was that West Easton could arbitrarily decide to increase the $50 resident fee (paid by Atiyeh) to some ungodly amount like $1,000,000. Acknowledging that is possible, Longenbach stated it's unlikely. And McCure added that if something lie that happened, the County would just stop sending inmates.

Stoffa also told Council he'd like to try a community work program for these offenders. They could clean cemeteries, veterans' graves and clear debris from local roads. "We had it before and gave up on it," he noted.

The lease will be introduced at tonight's Council meeting, and is scheduled for enactment in two weeks.
Posted by Bernie O'Hare at 1/19/2012 01:50:00 AM

So we are guaranteed by Stoffa that next year the prison census will go down because of his drug rehab lounge. his words, will he sign a contract agreeing to resign if he is wrong?

it's scary when longenback is tasked to think "possible but not likely". typical legalize for I don't know.

Nothing like liberals and their so called treatment options and using words like recidivism. Anon 4:25 has it right with what this place will be ... a drug rehab lounge. Where is Sheriff Joe and when you need him? Thats what is needed in Northampton County, not more bricks and mortar.

I've asked this before and here it is again, how is it that this never went out to a bidding process?

What is not reported is the ciminal histories of these DUI offenders and deadbeat dads. Will past convictions be used as a criteria for admission to this program?

" how is it that this never went out to a bidding process?"

You don't bid out acquisitions of real estate interests. You get appraisals. The County got two.

To those of you sneering at this attempt at reducing recidivism, let me point out the following:

1) It is the right thing to do. We should treat people like people, not animals.

2) Reducing recidivism will reduce your county tax dollars. 66 cents of every County tax dollar pays for the back end of crime. If we can keep people from returning to the system, we save money.

So there are 2 pieces, the real estate and the services that will treat the individuals.

Was there a bidding process for the treatment side of this?

It's my understanding that Abe has control over the services company or is this a county run facility?

It will be a County run facility. Atiyeh will have nothing to do w/ treatment.

Just so you know the treaTEMENT WILL BE A "PROFESSIONAL SERVICE" CONTRACT AND ALSO NOT BID OUT. sTOFFA TOOK CARE OF THINGS AT BOTH ENDS. nONE OF THAT PESKY "PUBLIC" STUFF WHEN HE DOES BUSINESS.

BO you have the nastiest people on your blog. Nothing satisfies these people. Having DUI's and fathers who are behind in childhood support mixed with the general population is not right. I am a conservative and can see the benefit to this treatment center. Throwing away the key does not work. I'd take sheriff Joe but we have to deal with what we have. These people will be working and then maybe they can pay child support. There should be no guarantees the population will be lower. We are stuck with what we get...

the dump called west easton is the perfect place for this waste of time and money. anything would be an improvement

Hey anon 4:30, your comments are fine but don't attack the commenters. Stoffa and his croonies have sold this turd by saying, "it will decrease the population at the prison". If he isn't sure he should say so.

There "are no sure things" but that is not how Stoffa and company has polished this turd.

The turth has always been a problemn for Stoffa and his pals.

hear TM is playing both sides here. Linning up rub downs and calling the cops.

4:30, Your comment is right on the money. Some nasty anonymous cowards do comment here, and use this Internet soapbox to smear other people with outright lies. That is why they remain anonymous. If they are unwilling to accept responsibility for their vicious attacks, their comments are worthless

anon 7:22. You are right. No one should just say the prison population will stay lower. That makes no sense at all. I will pay better attention to Mr. Stoffa's remarks and hope to be able to give him my opinion. Actually it is just a common sensed opinion. That said maybe the best we can do is keep more people from coming back to prison and even better help them to at least try to become upstanding taxpayers. That has to be the goal. We have too many do gooders making policy or I"d say let's research Sheriff Joe's policies. When jail feels better then being out there and responsible for yourself t is a disturbing thing. This is what society is cultivating. They are in prison or living with their parents. Of course too often these are the parents who create this mentality. Just my 2 cents worth as a concerned responsible adult taxpayer.

Damn straight. The prison is a huge issue. Stoffa will spend more of the money he inherited on this drug addict lounge and the next guy will be left to deal with the prison issues, Stoffa has ignored for two terms.

Facilities like this are needed. When you have an addictive personality and your abusing alcohol, you will usually need outside help. Here's a site that can help you find a treatment center in Pennsylvania