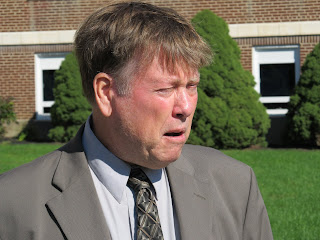 Poor Dennis Pearson! Always the bridesmaid. Despite his rather unusual way of expressing himself, there are few people more knowledgeable about City and County government than he. But as expected, he was unsuccessful tonight in his bid for appointment to Allentown City Council.

A vacancy existed because Michael D'Amore, its former President and one-time possible Mayoral prospect, ascended to the judicial heavens. He was elected District Judge in November, and now gets to wear a black dress. He may be a mini-judge, but still wears XXXL.

The job goes to Cindy Mota. According to Dennis, "[S]he now has the opportunity to serve which I never had and perhaps never will ... I am qualified but I can't get off the bus ... I am mad as Rosa Parks was."

Dennis would have voted NO on both the NIZ Board and the new Authority.

Dennis is a whack job and everyone knows it

And feels he "deserved" it. Oh come on.

who the heck is Cindy Mota? What are her creds? Is this another rubber stamper for king eddie?

P.S. The Abortion Clinic that plaqued our neighborhood is gone to Northampton - Hanover Township but the reason is so censored that the Morning Call won't report it.

I can't wait until we are divided into 203 representative zones

one of the most misunderstood guys around

Ah all of the understanding souls in the Lehigh Valley amaze me.

How often individuals who are focused and committed to the city are marginalized for not going along with popular opinion.

Dennis is not one to be swayed by the vote along to get along mantra.

A brilliant individual, historian and someone who appreciates what Allentown was, has gone through and is becoming.

I love Dennis Pearson but the powers that be will never appoint a "real" independent voice. Think Schlozz, Schwyer, et al.

You people are so delusional. Dennis, people can't stand your personality. You might have the best ideas in the world, but you alienate people like few others can. You brag and pontificate, and then when you are unsuccessful (surprise, surprise) you pout like a petulant child. Try being a little magnanimous in defeat, like the other 10 applicants were. You've been rejected by voters enough times - when will you decide that elected office is just not in your cards?

I will take one Pearsons over any ten Callahans or Schlosbergs anyday and twice on Sundays.

"I will take one Pearsons over any ten Callahans or Schlosbergs anyday and twice on Sundays."

I would rather take someone who knew how to spell the name of the person he supports. So does that mean you'd take 2 Pearsons on Sundays? That's sorta nepotistic, ain't it?

Dennis does care. For more years than you can know, he's been out in the forefront asking for East Siders to be recognized. He does care!

I've never been a big fan of Dennis but at least he has made the effort to run for the office..I dont know if the party chosen is a minority but if so it wouldnt surprise me..Many times council feels that they need to ignore experience and place someone on the board who is a minority. Talk about reverse racism..However, no one ever speaks to this issue..If someone continually runs and shows interest in the position they should get the consideration above the rest..Look at bethlehem..They have six candidtaes for controiller including Dave Diacento..He has considerable experience and has at least made the effort to run for the office..However, he no friend of the mayors, so he'll probably be ignored . If Bethlehem City Council ignores his experience, they are completely nuts..However, dont be surprised if they do.

Dennis is one of the most caring people I know. That said, I won't vote for him b/c he has a sense of entitlement, as if he deserves to be put into office. I also won't vote for people who are unfriendly to gays, minorities or jews. I've heard Dennis offer rude comments about all three.

His mixed metaphors are stupid. Stop comparing yourself to Rosa Parks. She wasn't an asshole.

Sense of entitlement?? Never saw that in Dennis..Once again, he at least has taken the time and made the effort to run for these offices..Don't no Mota ..Maybe she's a good candidate..However, if she was so interested why didnt she run for the office? If she was prevented from doing that for some reason, civil service or the like, that is understandable..Otherwise, it is unfair..

Dennis, she DID run for the office and lost in the primary by fewer than 100 votes to a guy that hasn't shown up since the inauguration. She's been to all the meetings. And, she's done more to get voters to the polls than you could do. Your candidacy dragged down the chances of the other Dems to win commissioner seats. You care more about running than you do winning, or you'd change your strategy. Just stick to EARN and drop your sense of entitlement.

Indeed I am not entitled any position. But I worked hard enough to be offered a position with some authority.

Now that Cythnia Mota has been appointed I do wish her well for the sake of Allentown.

Certainly she has had experiences she can rely on in serving in that position. But she assertes in her application that she wuld be the first female Latino and first female of color to serve ... And that is why she was appointed.

I do not have that advantage , all my people were here when the Liberty Bell rolled through what became the 15th Ward on its way to the Zion Reformed Church.

But what is worse is that I was not even nominated. That got me the most.

Council invited all the people interviewed to apply for Council again should there be another vacancy or run for the office outright. I will never say never but I don't think Council would ever appoint me. Not because I am not qualified but because politically they don't want to

In 1981 I was told by a person seeking the same Council seat that I ran for. That I had a bright future ahead.

Excuse me, I haven't been elected to any political or been appointed to any Commission, Board or Committee. I did my best for my neighborhood. But unfortunately, the bright political future that was predicted hasn't materialized... And I often wonder why and truthfully I fear it never will happen.

What I preseted above is not full with metaphors but is spoken from the heart. Some say Ms. Mota speaks from the heart. People should know, so do I. But from me it is less appreciated. Being a lifetime resident of Allentown I don't need to say I love Alentown to impress anybody. But newcomers one and all use that line.

Martin Luther King said do not judge a person by their skin color but by their character.

And this statement applies to everyone including me.

It pains me to see that Council selected a candidate based solely on race, and not on the best set of qualifications needed to legislate effectively. An overwhelming concept of picking a candidate to mimic the demographics of the city existed, and was perpetuated by a former council member, not once, but twice. I find that to be fundamentally flawed, on many levels. The cream always rises to the top, unless it is artificially manipulated!

If you listened to what Donovan actually said in both statements, he was endorsing a compromise candidate. The first time he explicitly backed Cynthia. However, it became clear that there was gridlock in the vote. The second time he suggested Brad as the compromise, saying the future of the city relies on young people, or something like that. Why would anyone think he was speaking in favor of Cynthia again without saying her name, when it was pretty clear to everyone who he supported from the beginning.

Also, the metaphor doesn't make any sense. Rosa Parks wasn't trying to get OFF the bus, she was trying to sit in the front.

Have you ever had to ride a bus, its disgusting. She would now beg to get off the bus.