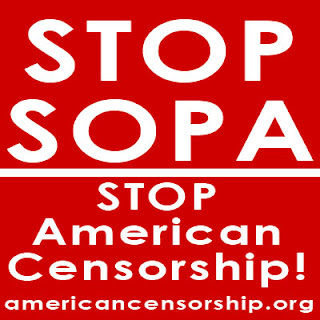 Although I prefer Craigslist myself, many Internet scholars were disappointed to learn today that Wikipedia was down today. Google and Facebook might suspend services for a day, too, which will force us all to talk to each other.

Blogger Noel Jones calls it the "Revenge of the Nerds," and Internet protest against SOPA, the Stop Online Piracy Act. Ironically, you can read about the proposed legislation at Wikipedia. It would enable the Department of Justice to seek Court Orders blocking access to sites engaging in copyright infringement. Video producers love the bill, while tech giants like Google are opposed.

Congressman Charlie Dent believes the legislation is too broad. Here's part of what he has to say. "I am concerned SOPA – as introduced - is not the proper approach to addressing this growing problem. Instead, Congress must work to fight online piracy in a manner that guarantees individual rights are respected and promoted, and innovation is not hindered. While I am not prepared to support SOPA at this time, I believe the greater exposure it has recently received in the public and in Washington will help generate a necessary dialogue about the need to combat the illegal activity of online piracy.”

According to Easton Patch, Congressman Tim Holden is opposed to the bill, too, even though he was originally listed as a sponsor. "[T]he possible unintended consequences, such as stifling innovation and limiting free speech on the Internet, have come to the forefront of debate. An open Internet requires that we find a better approach that is acceptable to all sides."
Posted by Bernie O'Hare at 1/18/2012 11:22:00 PM

Watch out, Dent's statement sounds like he's giving himself room to support one of the other proposals currently in the House. The problem with all of these is, nobody has actually demonstrated that copyright infringement is a problem. The only reason you give somebody a time-limited monopoly is that people might not produce as much creative work without the monopoly. But does anybody really believe people would start fewer bands or write fewer books or make fewer movies if IP law was weaker? I sure don't.

Actually, Dent and Holden sound very much like each other. But Dent gets trashed. Hmmm.

I am concerned that Casey still has not pulled his support for PIPA in the Senate, which Senator Reid has said that he is still committed to bringing to a vote. Good for Holden, good for Dent.

Although there has been a lot of activity since you wrote this post, one thing that was true at least yesterday morning is that SOPA has, or had, a lot of crossover support and crossover opposition. It wasn't really a dem/republican issue. It was more a question of who the lobbying interests got their hooks into.

It was the right move by google to pull out of the US chamber in protest and by Craigslist, Wiki, etc., to raise awareness.

Dent should be supported. He did the right thing.