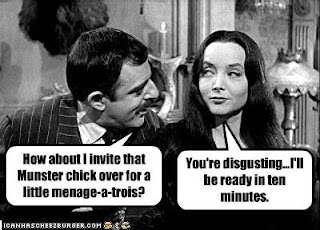 We all know that Senator Pat Browne drafted the NIZ legislation that was deceptively inserted the last minute in Governor Ed Rendell's 2009 Fiscal Code Update. In fact, State Rep. Julie Harhart, one of the few who actually knew what was going on, claims that's why she voted against it. House Democrats, anxious to see a budget adopted after a lengthy stalemate, either looked the other way or missed it completely.

Now Senator Browne, along with State Rep. Jennifer Mann and Allentown Mayor Edwin Pawlowski, is one of the Unholy Trinity recommending nine NIZ Board nominees to the Queen City Council on Wednesday night. Amazingly, Mann has recommended herself, too.

Now, I could forgive Browne for sincerely believing, as some do, that the best way to revitalize our urban cores is by corporate welfare, whether it's an outright grant, a KOZ or a NIZ. Never mind that it's always failed. But what's more problematic is that it appears that Senator Browne might be a little more interest in revitalizing his own financial core than that of any city.

A few short months after this NIZ became law, Senator Browne's wife suddenly became a registered lobbyist. I complained about it, and so did Rick Orloski, who was running against Browne at the time.

Now this is completely legal. Senator Jeanette Reibman's husband, Nathan, was a lawyer and lobbyist. So was State Rep Karen Ritter's husband. But the practice of a husband and wife, teaming up as legislator and lobbyist, stinks to high heaven. As Orloski noted at the time,


"Pat and Heather Browne have injected something new into Lehigh Valley politics, namely, the husband and wife team working in the Capitol with Pat Browne receiving public monies and Heather Browne receiving private monies to advance private agendas. Senators are supposed to serve the public good, not private agendas. Maybe the ideal solution is for Pat Browne to relinquish his public position and join his wife's lobbyist firm."

Voters, if they even knew what the hell was going on, thought otherwise and returned Browne to office.

According to Heather Browne's registration statement, last updated through 12/31/10, she's with Pugliese Associates, where her "expertise" in "government relations" and "business development" is lauded.

Guess who Pugliese welcomed as new clients in November?

All very cozy, isn't it?

Now this fails every ethical test - the Red Faced Test, the Laugh Test and my "It's Not Only Unethical - even for lobbyists where the bar is very low - But Also Probably Illegal" Test.

Now she could deny, I suppose, that Reilly and Topper are her clients. But since she runs the Allentown office for Pugliese and they are Allentown clients, that's gonna' be a hard sell.

Incidentally, Pugliese is located at 702 Hamilton Street. Why does that matter? It's where State Senator Pat Browne and Joe Topper are both located, with J. B. Reilly as their landlord. Now all we need is NIZ Board nominee Nelson Diaz as property manager of the building. That would be so cool.

Thank you for reporting this Bernie. Disgusting politics as usual. Does not matter what side of the isle your on, they should be ashamed.

I probably won't see any this come to light in the Morning Call because the building is located in the NIZ and I am sure the order has come down that calling into question our leaders that put this NIZ into place is anything but necessary.

You would think that the Express Times might would try to embarrass the Morning Call and investigate this relationship and some of the other things that are going on around this project.

We'll see. Right now, the question going through my mind is whether an apparent Ethics Act violation should be investigated.

The timing of J. B.'s building purchases is also questionable.

You need and "appalling" option at the bottom of each post. Not finding any of these things "funny" or "interesting" or "cool".

Is there any elected official above all this crap or are we gonna continue getting this type of disgust ?

Bernie, I thought what you have reported on he Arena would only happen in Chicago. Its a shame wha is happening in Allentown. No one on Council or Controller is providing any oversight on this.

It gets worse every day. The super secret dealings of government, hidden from the people who will pay for it.

Payola for all involved!! Wow, some really know and do make money off the taxpayer. Thank you O'hare for breaking this. Hoping someone reports this to the State Ethics Board and they do a thorough investigation of all involved.

Maybe JB doesn't charge Browne for that space in his building? Can you find out?

Wow, how "progresive" of these cozy friends. I just cannot believe how outrageous this story becomes every time something new is uncovered. Thanks for reporting. Too bad I haven't read this anywhere "mainstream."

Ugh! I need more coffee! Spelling ain't so great this time in the AM. "Progressive" - DUH!

bERNIE, WILL YOU BE ATTENDING THE WED, MEETING AS TO REPORT TO YOUR READERS OF YOUR BLOG AS TO WHAT WAS SAID AND DONE AS TO THE N.I.Z. THANS BERNIE FOR YOUR REPORTING ON THE N.I.Z.

bERNIE, WILL YOU BE ATTENDING THE WED, MEETING AS TO REPORT TO YOUR READERS OF YOUR BLOG AS TO WHAT WAS SAID AND DONE AS TO THE N.I.Z. THANS BERNIE FOR YOUR REPORTING ON THE N.I.Z.

Shame on the the Brownes, their style of using public service to serve themselves is what turns decent people away from the dirty game of politics.

Wow Bernie! You have been very busy this weekend. I am not in the least surprised by what you have unearthed so far. It reads like a who's who of the LV movers and shakers. I see this again as THE story of the year and you are riding the wave. Throw the bums out!

Would love to know who the vendors are in the arena project thus far. Would also love to know how King Edwin went about hiring those folks. BTW.....was the demolition bid out or just handed to the only union demo guys out there? Butz is adding on to thier building that they have yet to fill? How will other municipalities complete with rent rates as low as 8$ per square foot like Allentown is taunting. This sucks for the lehigh valley as a whole. The should have built that damn arena NJ. And also - why do they not want to bid the work......the work was bid at the erie arena?

link to erie, pa arena project where it explains that the project is publically bid. Why do they not want to publically bid this project. Bullshit with its an arena. Get a specialty guy to design the ice and HVAC systems. Any knuckle head could build it.

I would also like to know how King Edwin plans on explaining all of his political contributions and how the city went about hiring proffessinals.

I'm happy to see the story, especially the concerns raised by Tim Potts.

Browne and Reilly have been friends since childhood. Browne's brother and Reilly are still best friends. Reilly put Browne up to this entire NIZ and has been purchasing real estate in Allentown (where others with money have been leaving) for a while with no apparent plan. If this deal goes through, look for Browne to be out of politics and onto Reilly's payroll in future years.