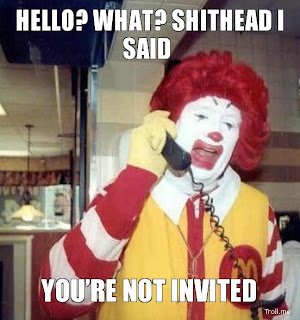 The Express Times' Tom Shortell has a well-written account about Congressman Tim Holden's news conference at the Northampton County Courthouse yesterday. It was hosted by DA John Morganelli. Now Morganelli made sure that Mayor Sal Panto, State Senator Lisa Boscola and State Rep. Bob Freeman were all there. Northampton County Controller Steve Barron, who can smell a news opportunity from miles away, waddled over to the courthouse rotunda, too. But where was Northampton County Executive John Stoffa? Where was any member of County Council? Where was I, who could have covered this story, too?

Morganelli never bothered to invite the County's top elected official to a news conference just down the steps from his office, even though 75% of the County's budget comes from state and federal funds.

On a much less important level, I received no invitation, either. That's odd, especially since Morganelli was never hesitant to send me news releases when he was running for AG.

According to Morganelli, Holden viewed this news conference as an "Easton" thing, and Morganelli only invited the people Holden wanted there.

* If this is just an Easton thing, wouldn't City Hall be a more appropriate venue?

* If this is just an Easton thing, why was the County Controller there? Did he really just magically appear on his own?

* If this is just an Easton thing, why does the headline read, "Timothy Holden promises to build strong ties to Northampton County as its congressman"?

Morganelli explains his failure to invite me, a LV political blogger was pure oversight. He was just thinking of mainstream media. Really? Then why the hell was Patch there?

I believe the snubbing was intentional because both Stoffa and I would have quickly realized the courthouse was being used, improperly, to conduct a political rally in which Lisa Boscola launched yet another attack at Charlie Dent, the LV's other Congressman.

Boscola calls him one of the "masterminds" behind this plan. But Holden, who benefits as much or even more than Dent, is blameless.

Well written Bernie. Typical Morganelli stunt one day after being sworn in. By the way isn`t Barron full time now ? Did he take vacation time to attend ? Mrganelli should be ashamed of himself for rubbing shoulders with the worst non-independent controller in Northampton County`s history. Shame on you Mr. Morganelli. You should know better !

Barron thought they were serving free beer and sausages. Cut the guy a break.

Did he wear a kilt? In this weather I hope he had on his woolen pantalons.

Morganelli knows no shame. Let him play his childish games. He will never be anything more than he is. He has the Rick Orloski syndrone.

Judging from the guest list, Holden intends to only work for Democrats in Northampton County! His very first visit was a partisan event in a public forum. ALL elected officials should have been invited. I have seen Dent do it many times. Congressmen cannot ask the party affiliation of their constituents...well, they shouldn't at least.

Stoffa is now no longer relevant. With Angle gone he has no protector.

Morganelli just despises you Bernie..Shit happens..At least he was nice enough to make a phony excuse..Is Stoffa still a Democrat?

This was an outrage!! There is no way Tim Holden would have told Morganelli that the County Executive or County Council President should not be invited. That is pure bull_ _ _ _.The citizens of the county should be offended by Morganelli's lack of sensitivity and he should apologize publicly for his blunder.

You are kidding , right..Bernie takes pot shots at Morganelli every chance he gets and Stoffa, for better or for worse left the Democratic party (not on paper but for all intents and purposes) shortly after his first election as County Executive...So why the hell would Morganelli invite them.

Morganelli is such a petty little loser. I chuckle when I think of him schlepping to Pittsburgh for cash and coming back with nothing but an extra hotel charge for Spankvision movies.

Seriously Bernie..John Stoffa, for better or worse, left the Democratic party and party politics years ago..He'd be a bit out of place here, no? Also, nothing against you but, I don't think they wanted, what they would view, negative press at the first meeting with Holden. And i heard the Rev was saying a prayer there and they didn't want to get you upset, lol

As BO has rightfully stated, if this was just political window-dressing then it should not have taken place in the county's courthouse. If instead it was an orchestrated effort to "introduce" Tim Holden to Northampton County then to not invite the county's highest elected official was a slap in the face of its citizens and a travesty.

Just saw the video of the "press conference" on mcall.com. This was purely a staged political re-election speech by Holden. He asked for the support of NorCo voters in his re-election next year. How can this be allowed in the county courthouse? Bernie, if technically they were not in violation of the law, was this shameful display against the rules of the courts? They were in the hallway just outside of a courtroom! There was even a shot of Judge Smith observing the proceedings. Does this open the door for any kind of political press conference to be stage in front of courtrooms?

Yes Bernie, it looks like it was used for a partisan political event..So what's Stoffa doing about it??

Dent is not our problem any longer. Screw him.

Yes, and obviously they didn't want Repubs like you and Stoffa lurking around.

I was shocked to see Freeman, I thought he and Stoffa had passed away. Surprise, surprise.

It was to introduce the new Democrat to the Democrats, that is why John "wrong way peach fuzz" Stoffa was not invited.

I have seen Dent do it many times. Congressmen cannot ask the party affiliation of their constituents...well, they shouldn't at least.

Yeah I agree, like the time "Goodtime" Charlie held a jobs event with stimulus monied employers when Obama came to the valley.

I see. This is stealing. Taxpayer resources were apparently used to host a purely partisan event. What is most amazing of all is that this was hosted by the DA. but i guess as long as a Democrat is the thief, it's ok.

Another point. Stoffa IS a Democrat. In fact, his position on issues like bi-county health, prisoner traetment, and open space place him to the left of all dems who have been on Council until this point. He is hated by partisans bc he is willing to accept a good idea, no matter who the author may be. Instead of playing petty political games, he is trying to govern.

That is why he fired the private company that was fixing Gracedale the minute he took office. Stoffa is a mean and vindictive pol. He sabotaged Gracedale and you know it.

I know Stoffa has an D behind his name. And that is where it ends.
Piss poor C.E. I wouldn't vote for him again....ever.

I've come accross a letter sent by Stoffa to retiring and retired Gracedale employees. It states he would never under any circumstances sell or support the sale of Gracedale. he signed it like John Hancock. He is lucky there is no recall.

Why not file a RTK, and get this letter Bernie?

You must remember people who really knew and had worked with John Stoffa knew what the county was in store for. He has sold O'Hare, Bill White And Owens on the whole, "honester than thou", routine but that really isn't him at all.

He promised unions when he first ran he would allow arbitration for all, he lied. He promised to have an open communication administration, he lied. He told retirees he wanted to help them, he lied and forced them to check with an outside attorney. He promised not to sell Gracedale, he lied. He wished the Gracedale coalition luck and he would abide by their efforts, he lied.

So really, what the Hell did any of you expect? He is tied at the hip to a former councilman who propped up his run for County Executive. You thought you were getting a Lincoln and instead you got a beat up old Ford.

This is important for future thought. When candidates promise you everything try to "think" with your brains and not you "ass". Words are cheap, actions are where it is at.

Stoffa mislead a lot of people. He couldn't get elected dog catcher rat this point.