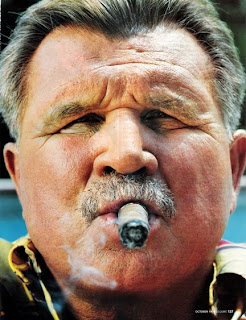 Yesterday, I told you that Bethlehem City Council approved a Nazareth football coach for the City's Planning Commission without a peep. I have the following concerns.

1) Impulse Control. - Although acquitted of criminal assault, the fact remains that he knocked out a high school senior during a football game. What happens if something doesn't go his way on the Planning Comm'n?

2) Bethlehem Ties. - Real estate records reveal that Melosky lived in Northampton, not Bethlehem, between 1995 and 2010. When he moved to the Christmas City, he rented instead of buying real estate. First, he was at the Silk Mill. Now he is at some mansion. What does he know about Bethlehem and its development?

3) Planning Background. - He appears to have no background in planning, in any capacity. None. This is a big contrast from the Larry Krauers and Steve Thodes who recede him.

4) Independence. - It is well known that Melosky is a Callahan drinking buddy. How can he really be expected to be independent?

It may very well be that there are good answers to all these questions, but we don't know that unless they are asked. Yesterday, one of my fans provided me with Melosky's email address, so I fired off a letter asking him the questions that should have been posed by Council.

After all, that's why he was there.

Hey wouldn't you want to help a pal who hangs out at the Melt and Erv's with you. what are friends for.

Excellent questions. I am sure you will get all type of answers.

The problem with 3/4 of the planning commissions and zoning hearing boards around here is that they rely heavily and almost always take their solicitor's advice lock stock and barrel. Most of these boards are run by lawyers in reality. There's little independent thought.

Hey Bernard, why do you care so much about Bethlehem? You live in Nazareth.

You people are just foolish, what public official in their right mind would go to a local strip club. Not that I personally have any problem with it mind you, but many in the community would and no one seeking higher office would EVER do so.

People make grandiose statements on how the city and community are run by the strength of certain individuals. If you think these people are smart enough to hold positions of power how could you then say they would be so stupid as to do the things you charge. It makes absolutely no logical sense at all. Melt and Erv's are you kidding me, and someone is dumb enough to act as a first person validator? Why go to the township for a good meal when we have so many excellent establishments in Bethlehem. Your obviously foolish and worse yet lying.

JC is seen at Melt. Are you that worried about your job, Shame-us

Oh and I almost forgot.
Thanks for reminding me Shame-less.
There was a third person included
in that night of debauchery.
Boy howdy!!! They really got "sauced".
Well, it is diner time, I think I'll have a STEAK SANDWICH.

Nothing wrong with Melt, the proprietors are very nice people as is the staff. I really like Blue In Bethlehem Township also. My point was adult entertainment statement and the comments that people loudly yelled such things.

I do not nor have I ever worked for JC.

Oh I forgot my new signature...

You won't get an explaination of his qualifications because there are none. You have already explained that. Callahan's drinking buddy

The Rat Pack had class. The Callahan Clan has crooks. Slimey wannabes just waiting for a grand jury.

they've already bought of the jury

I stand by my comments.
And have about 8 additional witnesses.
Alcohol does weird shit to people.
I really don't care that people cheat on their wives and go to tittie bars

IT IS THE DRUNK DRIVING

maybe someday you'll run into them between bars.

we beleive you 8:52. They have a major coverup squad. Many witnesses over the years.

you guys need to put back on your tinfoil hats. We are starting to get in your brains.

Seamus aka Joey (Bishob that is).

We are more concerned about you getting into our wallets Joe, I mean Shameus

I think it's terrific that the Mayor gets drunk with folks and then drives home. It's also great that he uses a city car to drive home drunk in.

See, when you make a statement like that, it really means nothing. I can say you're shooting up heroin right now. If you want to say you see the Mayor driving drunk, then provide details. Who saw him? Where? When? How did they know he was drunk? It would be helpful if you identified yourself, too.

Ask the city garage guys how many spare side mirrors they keep on hand for the Mayor's car. (Just in case one of em gets "knocked off" ya know!)

Ask the parking garage attendants how many times they wave the Mayor and his buds through and they can hardly make it out of the parking deck in a straight line.

I think you will find all of the answers you want then.

Well, did he respond?

Nope. If he had, I would have posted it.

Was just wondering if he tried to go "off the record" with you. He thinks he's a charmer. Then, if that doesn't work, things get a little more, intense, so to speak.

I've not been able to learn what happened with the witness tampering investigation. Any word?

Yes. There were no charges filed, but bail was modified.

I can confirm the many stories from parking authority employees and their impressions of certain individuals and thier circle of thugs leaving a city garage in a less then sober condition. It is sad as more then once the story was "so-and-so left and they weren't too bad". Sadly of course these people never came forward to the authorities, for fear of their jobs and me hearing the story is not proof. I believe the stories because they were told in confidence and not for the purpose of trying to gain anything or due to any political agenda.