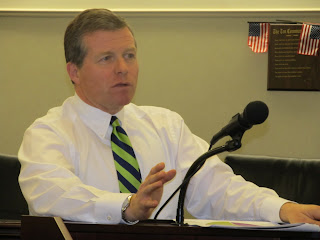 Traditionally, members of Congress sit with other members of their own political party in a divided chamber. But in 2011, that changed as the need for bipartisanship has become more clear. Tonight, during President Obama's State of the Union address, LV Congressman Charlie Dent with Iowa Democrat Bruce Braley.

“On a night the President outlines his vision for 2012, it is important elected officials illustrate to the American people our determination to tackle the major issues facing our nation in a bipartisan manner,” said Dent in a news release. “Sitting with my colleague and friend Bruce Braley is a simple gesture to show our shared commitment to working together. This show of unity is particularly poignant this evening, as we celebrate the service of U.S. Rep Gabby Giffords (AZ-8), who will soon resign from Congress to focus on her rehabilitation.”

“It won’t fix everything that’s broken in Washington, but sitting together in a bipartisan way is a good reminder that at the end of the day, we’re all Americans – not just Republicans or Democrats,” said Rep. Braley. “Charlie and I don’t agree on everything, but we’re friends and we do agree that when it comes to facing our nation’s challenges, we face them as a united people, not as members of political parties.”

No word on whether they will hold hands. But they are members of the same fraternity, so they probably know some secret handshake or something.
Posted by Bernie O'Hare at 1/24/2012 05:32:00 PM

If Charlie wants to sit next to an ideological opposite, he could select any one of 95% of his own party.

In all seriousness, good legislation occurs from the center. We need to moderate the extremes of our system, because all the solutions involve hard things that everyone needs to be involved in give and take. The political gamesmanship on both sides is killing our country.

this shows that Charlie has more balls and class the those who would pretend to be him (read callahan, et al)

Does Charlie's wife know about this?

As I watch the State of the Union, I am appalled at how smug Sen. Tommey is towards basic American values of eliminating tax incentives that encourage exportation of Jobs.

Exactly who is this "PAC"man representing?