Pete Schweyer's Race Ends Before It Can Start 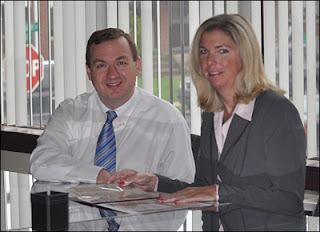 Yesterday's per curiam Order of the Pennsylvania Supreme Court, which invalidates the state's legislative reapportionment plan for State House and State Senate districts, may very well have been the right call. Still, it has thrown a monkey wrenches into this year's races. Some who chose not to run in certain House districts are now being forced to  re-evaluate their chances, with practically no time to make a decision. Others have seen their races end before they could even be launched.

In the Slate Belt, for example, Joe "Cap" Capozzolo, a former Bangor Mayor and member of Northampton County Council, was seriously considering a run for the State Senate. His hopes are dashed by yesterday's ruling.

But the person I feel sorriest for is Allentown's Peter Schweyer, a member of Allentown City Council who was going to run in a newly created "Hispanic district." He works as State Rep. Jenn Mann's Chief of Staff, but would be required by law to resign once he announced his campaign.

My understanding is that he may have already resigned, and was working for Croslis and Brennan, even though he's no lawyer. That firm serves more as some sort of brokerage house for local Dems than as an actual law firm.

He should be able to get his job back, although I did pretty well in an interview earlier this week. Jenn Mann loves me.

Yesterday's ruling has nothing to do with the Congressional redistricting of Charlie Dent's seat. I have spoken to several people who mistakenly believe that Tim Holden will no longer be representing Easton and other municipalities. That's another matter.

Updated 8:00 AM:  In a comment, Allentown's Dennis Pearson notes that the High Court decision also ends Tatiana Tooley's campaign against Mike Schlossberg. He adds that Schweyer can still run ... against Justin Simmons. Easton teacher Kevin Deely has already announced his candidacy as a Democrat in that race, but would be crushed by either Simmons or Schweder.
Posted by Bernie O'Hare at 1/27/2012 12:01:00 AM

What about Schlossberg? Is that twit in troublee.

No, Schlossberg is not in trouble .. Unless Mann reconsiders her resignation ... The one announced candidate other then Schlossberg that entered the 132 race so far Tatiana Tooley is now inelgible to seek election in the 132 district citing her718 N. Sherman Street Address.

Pete Schweyer still has an alternative ... He can run for the131st district now held by incumbent Justin Simmons ... Simmons beat Breyer in the primary last time and then beat a democrat named Horton.

In this fiasco it is really the East Side of Allentown that got kicked in the butt ... Undr reapportionment 5 East Side precients out of six were brought together ,,, And would be in a basically Allentown district..Now East Allentown is once again disppersed among three districts ... The argument at the Supreme Court of PA was that many communities with the same interests were divided ... Well can't you say the same thing about the East Side of Allentown . We indeed can live with being in a basic Bethlehem, Whitehall district if we weren't divided ... But we are divided.

Historically I beat Joe Brennan, Jose Rosado and Attorney Ryback in my two Allentown precincts but not elsewhere.

Dennis, will you PLEASE stop using ellipses instead of periods? You might have good points, but your assault on English grammar is unnecessary.

If they go back to the old districts, Mr. Simmons might not be crushing anyone.

Has anyone else taken notice that this young allentown counsil court jester has been one of paluma's yes men since becomming a chairperson. To even think this man would say he would represent the latino community in allentown is a laugh. Just another self serving over indulgent,gluttonous polotician just like the rest of the ones that will be helping fix the economy. What a joke

This is a damn shame for Pete, he is a truly good kid who just wants to help people. But it is a good thing for the people of pennsylvania and I can't wait until the rule against the federal redistricting crap that went on also.

Joe Cap for senate? Beats the hell out of that Scavelli clown!

That really stinks for Pete. Of course Slobssberg gets the free ride.

The Schloss and the Schwear are both young pols on the make lookimg for a life of public offcie tit sucking ease.

Neither are that sharp just pols for sale.