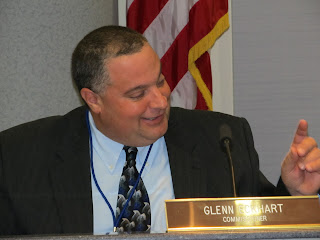 Affable Glenn Eckhart was, until the end of the year, a Lehigh County Commissioner representing District Five, the southeastern portion of the County. Democrats joked they'd be buying him a calculator, a reference to his blue collar background and relative lack of any kind of accounting background. Time will tell whether he, like his counterpart in Northampton County, represents a new kind of political controller. But the immediate question is who is going to replace Glenn on the Board of Commissioners.

Under their Home Rule Charter, Commissioner have forty-five days to fill the vacancy with a person from the same political party, which in this case is Republican. If that fails, the judges could be called upon to break the bottleneck.

There are three applicants - Norma Cusick, Daniel Paschke and Mike Schware. They'll be interviewed by the Intergovernmental and Appointments Committee tonight at 7 PM, at the Government Center's meeting room. Here's a rundown on each.

Norma Cusick. - Yes, she's John Cusick's mother, but let's not hold that against her. A recently retired Salisbury Township Commissioner, she's served on the school board, Allentown Public Library, Lehigh County's Child Advocacy Center, American Heart Association and even the Pennsylvania Shakespeare Festival. Despite being the mother of nine, she has a Master's Degree in psychology. Unlike her son, Cusick supports the creation of a bi-County health department.

Cusick is also the only applicant who ran for this position last Spring.

Mike Schware. - A CPA with his own business in West Allentown (16th St), Mike has been a civic activist in the Queen City for many years, a frequent face at City Council meetings. The bastard (and his 9 year old daughter) beat me in a 5K last Summer, which alone is reason enough to reject him.  Joking aside, what concerns me about Mike is whether he will bring his own voice to the Commissioners, or whether he will be just another extension of party boss Wayne Woodman. His own voice is pretty good.

Daniel Paschke. - According to The Express Times, this Eagle Scout works for State Rep. Justin Simmons as a "constituent outreach specialist." As with many others in local government, from Peter Schweyer to Jeff Warren, I always question whether a legislative aide can really be independent.

Norma Cusick is Joe Brennan's Mother in Law ... Joe displayed Norma's Yard Sign in his yard in the spring primary.

well, when lehigh county voters elect 4 R's. 3 of whom have vowed to vote with one another, it's pretty easy to see that whoever is selected will be their pawn

Would you want trouble with your mother-in-law?

So how'd this go?

I ended up in Bethlehem, but the Committee recommended Schware. Here's a recap from the ET.

What a SURPRISE that the Committee Recommended SCHWARE he is IN TIGHT with the GOP CHAIR PUPPET MASTER Wayne Woodman and Supported the Gang of 4 which have NOW Turned into the 3 STOOGES since Dave N DID NOT MAKE IT. SCHWARE was ALSO HIGHLY OUT SPOKEN that he Wanted Dean Browning OUT of OFFICE. So Put Mike Schware in Office So the PUPPET MASTER WOODMAN has ANOTHER PERSON he CAN CONTROL and TELL WHAT TO DO AND HOW TO VOTE Like the 3 ( Vote NO ) STOOGES

Casey has a post on this topic. He was there. From what he writes, it sounds like the other two did not interview well. Mike Schware is definitely a Scott Ott supporter, but I respect the guy and believe he has personal integrity.