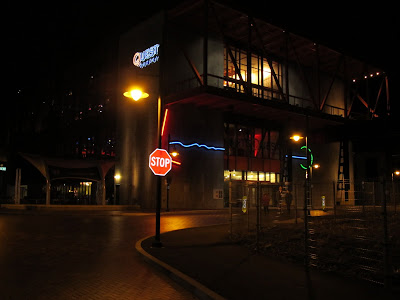 I was so caught up talking to everyone at last night's Express Times' Blogapalooza, across the street from the steel stacks at South Bethlehem's ArtsQuest Center, that I completely forgot that I was really there to see a damn movie. By the time I made it down the hallway, the show had already started. So I missed the movie, but it was worth it. Not only was I amazed by the sheer number of bloggers who came, braving predictions of icy roads, but their variety just stuns me. Let me give you your own personal tour de blog. 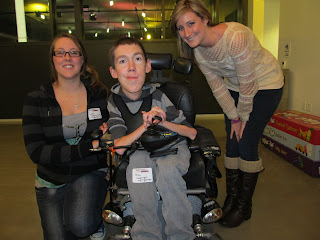 The Most Courageous Blogger I now know is a fifty pound featherweight. A Moravian College sophomore named Shane, he suffers from Spinal Muscular Atrophy. I'll spare you the medical terminology and just tell you it's going to kill him. In fact, the very first sentence of his blog reads, "I will most likely be dead before I turn 30." But his blog, Laughing at My Nightmare!, does just that. Instead of feeling sorry for himself, he finds reasons to laugh and enjoy life. Instead of being depressed, his well-written blog gives me faith, not just in him, but in all of us. Maybe we're not so bad after all.

This dude had all the babes, too. 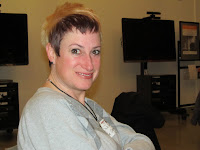 Speaking of babes, one attractive woman was snapping pictures throughout the event with such a fancy camera that I thought she must be an Express Times photographer. But instead, it was Deb Boylan, who chronicles the antics of the Lehigh Valley Roller Girls from her blog, The Corner Seat. Deb and I have been Facebook friends for some time, but I never even knew she had a very active blog until last night. Naturally, I hit on her, and about three seconds later, found myself in the Steel Stacks, writing, "I will most likely be dead before I turn 61."

As you might have guessed, there's a lot of intensity and energy in Deb's blog. 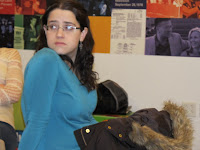 After pulling a few shards of steel out of my ass, I sought medical attention. Fortunately, a nurse was in the house. A R.N. at a nearby hospital, she calls herself A Writer in a Nurse's Body. I asked her for some help and she told me I need an undertaker, not her. She's working on her first book, which I hope is a novel, and not some scientific study of bottom-feeding bloggers. 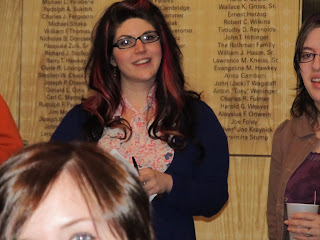 Aside from a nurse, numerous local bloggers preach the merits of healthy living. Case in point?  How about vegan Jaime K's blog, Save the Kales? I love her review of Pho #1, a Vietnamese restaurant in Allentown specializing, not surprisingly, in Pho, a Vietnamese beef broth soup that explodes with flavor the moment it hits your palette. But Jaime incorrectly reports it's pronounced "fuhh." Actually, as someone whose grandson is half-Vietnamese, I can tell her it's more like "fah." I pointed this out to her, and the next thing you know, I found myself in the Steel Stacks again, pulling more shards out of my ass.

As you've probably surmised by now, there was an unusually large contngent of attractive women at this event. No doubt, they heard I was coming. 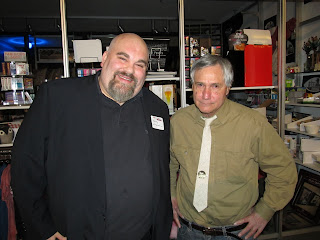 Another chick magnet showed up, too. Allentown blogger Michael Molovinsky, sporting an Adlai Stevenson tie clasp, came against his better judgment, after I begged him. Michael, as you know, sometimes gets irritated with me. I don't know why.

He's something of a germ phobe, and the first thing I did was sneeze all over him. Then, to make matters worse, I asked him to pose for a picture next to Johnny Sized, who's writing about his daily adventures in trying to become half of himself. Right as I was snapping the picture, Johnny told both of us he was just getting over a staph infection.

Once again, I found myself in the Steel Stacks, pulling shards out of may ass. 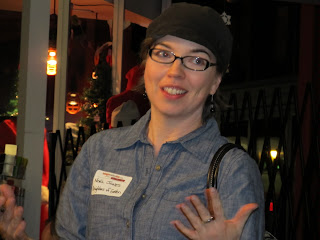 "You supported the Charlie Chrin TIF," she snarled.

Next thing you know, I was in the Steel Stacks again, pulling out a few more shards. And now, the ice was pelting me. 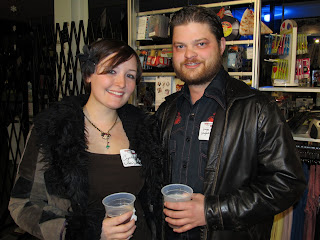 Then I saw George Wacker, whose Lehigh Valley With Love is among the funniest in this area. Naturally, he found the beer, which made him an instant hit. He and I, believe it or not, taught Lehigh University students about blogging for one hour. Can you imagine spending $40,000 to have your child schooled by two morons?

I pointed that out to Wacker, adding innocently, "Looks like Lehigh Valley With Love has a Lover. How much?"

This time I just threw myself into the Steel Stacks. 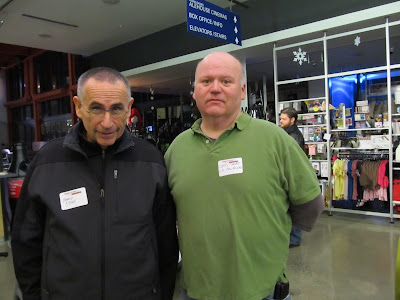 Finally, I met the one blogger who would understand me and would not toss me into the Steel Stacks. Chris Casey, one of the blogging pioneers of the Lehigh Valley with LVPoliblog, agreed to pose with me, and Molovinsky came back to take our picture.

Then we all kissed.

But maybe not, according to Alyssa Young at The Express Times. They are considering hosting more of these in the months to come.

Hey Bernie there is a claim on the Gracedale blog that John Stoffa may resign before the end of his term due to health issues. Any truth to that?

Bernie It seems when you are in a room with beautiul wmen they flock to you. Why you and lets say Mike Molovinsky they just ignore and Mike has the money and is better looking.

why do you always bend your head down and look over your glasses when you are having your picture taken?

Bernie, you are comical!!! Keep blogging and reporting on real events that happen in our communities. If someone hasn't thanked you lately, thank you. I owe you that lunch sometime soon (then you can teach me how you lost so much weight too)... You should blog about that, congrats!

very cool....me likes the new format of your blog...

Looks like a fun time. Maybe I'll screw up enough courage to attend the next one (if I can ever find a focus for my blog)

3:13, You should know by now the Gracedale people are idiots. They post that rumor right after urging people to run me over. Such Christians.

"why do you always bend your head down and look over your glasses when you are having your picture taken?"

Probably bc they are reading glasses.

UT, Hope you come next time. You'll love it.

Looks like all the people who bet on me to be "thrown out on my ass" lost their money.

6:38, True, MM is better looking and had an Adlai tie clasp. The women were actually flocking to him until he ran out of there.

It was a very nice event and the AetsQuest Center really is beautiful, at least the part I could see.

IPP, Were you there? I did not see you.

pigpen was in the toilet, hard to see.

A Writer in a Nurse's Body said...

Hey Bernie! Thanks for the awesome shout out. I had a lot of fun last night and it was really fantastic getting to meet everyone. I love your blog and I will definitely be a new loyal-follower. See you next blog night! -

Go Shane Go!! Show these people what a real blogger is all about.

WNB, It was a pleasure meeting you and so many others. Hope to see you next time.

WNB, once you realize this is a hate blog you won't come back.

This is great! I appreciate all the links to these blogs! Thanks, Bernie.

No doubt about it - links on the RIGHT!

Well, wait a sec, maybe they look better on the LEFT?!

Put 'em in the MIDDLE and be done with it already!

Whoops! How'd that happen? Above comments meant for the other post.