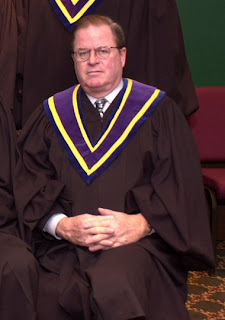 Last year, Pennsylvania's Supreme Court showed just how out of touch it is with the rest of us in a news release announcing a computer system with an e-pay function, enabling criminal Defendants to pay their fines on the Internet. It brags that statewide, Pa. courts collected a "record" $480 million in fines, costs and restitution during 2010. But at the same time, Chief Justice Ronald Castille huffs, "Courts are not collection agencies."

Excuse me, but isn't collection of fines, fees and restitution part of criminal justice? Did I miss something?

Of the sum collected, only eight per cent - $37 million - is for actual restitution.

Yesterday, I told you that Criminal Division Clerk Leigh Ann Fisher has no idea how much money is even owed in Northampton County, although she believes it's tens of millions. A recently-hired accountant is trying to determine a figure.

I'm amazed that Controller Steve Barron would snub a crime victim after promising to help her, even though it has nothing to do with his job. I'm amazed even more that he's never audited the "efficiency and effectiveness" of criminal collections. That is his job.

Pennsylvania does have a crime victim compensation program, but except for stolen cash, it has no application to victims or property crime. So victims of break-ins like Susan Eagle really depend on the County to collect money they've lost through no fault of their own from the persons who are responsible. That's called justice, and it's not working.

On a state level, the Commission on Crime and Delinquency was pitching a new unit a few years ago that would consist of two or three new people who would have help counties go after big offenders and assist locals with identifying resourses to attach wages, etc., based on a successful federal model.

Now you know as well as I, this would be a politically tough audit to do. He would be tugging on those black robes and I would rather tug on Superman's cape but then again, Barron ran for the job.

He could continue to audit overtime expenses and guns and brag to voters about the difference he makes. Those are generally innocuous audits that offend no one. He could continue to talk about alleged audits of Gracedale that no one seems to be able to find, another favorite. He could report suspected asbestos problems which seems even less of his job than this lady's problems.

I am willing to wager you BO that you won't see either the DA or the courts have an auditor knocking on their doors anytime soon. Want the bet?

I won't be taking that bet.

A real controller along with real court officials and the exec would be tackeling this problem head on. There I go again - living in fantasy land.

This would be as interesting in lehighcounty as well ALLENCLOWN the county seat.

"A recently-hired accountant is trying to determine a figure." says it all about our Controller! Go figure!

Today is arraignment day I wonder how many peoples cases were plead down just to dispose of the case, but when you look further they have a huge prior record and have been through the courthouse 100x in the last year meanwhile not paying their cost.

Lets see if Baron Von Pantalones does an audit. I am betting no.