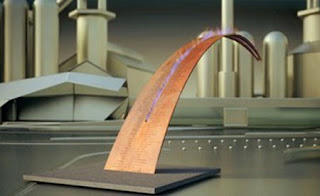 In 2007, Northampton County Council pledged $1 million in hotel taxes for the Artsquest Center at Steelstacks, located by the blast furnace on Bethlehem's South Side. On January 19, Artsquest Executive Director Jeff Parks updated Council on what just what they've received for the $320,000 they've invested in a $32 million project that has only been in business for the past eight months. From its economic to cultural impact, Parks told Council that the Artsquest Center has exceeded expectations.

At the time it was designed, it was hoped the project would create 100 jobs, both direct and spin off. In eight months, there are now 142 jobs, and the Center is on target for an annual, $39 million economic impact.

But Parks is proudest of the cultural impact that ArtsQuest has on the Lehigh Valley, especially during hard economic times. He pointed to 219 live free concerts at the TD Bank Community Stage, 44 free concerts at the Levitt Pavilion, 36 Peas & Qs free children series shows, four sculptures, 44 nonprofits that can use the SteelStacks at no cost and family programming that reaches over 25,000 children annually.

Council President John Cusick asked Parks how he can afford to put on so many free shows. "Eighty per cent of the people we serve pay no fee," Parks proudly stated. He added that ArtsQuest's main source of operating revenue is not the public trough, but ticket sales, food and beverage sales and private sponsorships.

As a result of two weekends of rain during Musikfest last year, Parks told Council that ArtsQuest will report a $700,000 operating loss for 2011, which is 5% of its $14 million budget. As a result, it has entered into payment arrangements with Bethlehem and other creditors. But he added that the silver lining to the storm clouds that came with Musikfest was a record audience of 63,436 people at Chriskindlmarkt, as well as a 30% increase in holiday tours over 2010.

Council member Bob Werner told Parks that his many volunteers are "the backbone of AertsQuest." Parks agreed, adding that only the Lehigh Valley would have so many people who take an interest.

Parks is hopeful that the ArtsQuest Center will attract what he calls the "creative class."

Gee, I wonder if bottom-feeding bloggers are part of the creative class.

Artsquest will forever live off the public teat!

Quote from the lehighvalleylive.com:

"Councilman Lamont McClure asked how the group planned to get itself off public funding as it moves forward. All of the largest donors came from either the state or the county, he said, and the group could not plan on receiving those donations in the future."

I'm impressed by the size of the ego of a man who announces his retirement nearly three years before actually....retiring.

I mean that has to be a really big ego.

11:04 it's not uncommon for succession planning to occur well in advance of three years for a major organization.

Seamus is now a shill for Parks as well as Callahan, nice job there Shameus. Hope you get a commission.

School may still be out on Artsquest. But there's no denying that Parks has done very, very well for himself.

I fear that we have a large "white elephant" on our hands. I hope I am wrong.

Let's not forget why Seamus would be involved as the # 1 Callahan propagandist with commenting on Artsquest. Don't forget about the Parks announcement of the timing of his departure. And, let's not forget that rumors are still circulating that Callahan has his primary goal as running for County Exec. Timing is perfect, if he wins County Exec., he goes from one elected position to another and continues his life goal of being a career politician. Sorry, to his wife, that won't get him where he promised as President. Anyway, if he doesn't win that job, it'll be interesting to see if he doesn't end up with Parks job the following January, timing of course is perfect.

It is hard to imagine John Callahan as County Executive he is the last person the county needs at this time. Who knows but I am sure the union idiots will endorse him.

As a taxpayer I do not wish my money to be spent this way. Artequest sounds like it is doing just fine and the county should not be picking and choosing which businesses get a taxpayer investment. How many artsie fartsie young people does one area need? This is Mr. Parks stated mission only he used the word creative. State or county funding tis still our tax money that could be used somewhere else. Maybe a tax break on gasoline instead of all of these grants to prop up or start up businesses that should be able to sink or swim on their own like everyone else.

a large white elephant....bernie don't let them talk about you like that. So not cool...

These are the same people who said the casino wouldn't happen, then steel stacks wouldn't happen. PBS would never be there. All you people do is complain. Just enjoy something for once will you! Admit its nice and enjoy your hate ridden lives, please. Trust me life is is short and you never know what is comming around the cornert.

Seamus - Do you have cs?

Do I own any Credit Suisse? no, but do hold some Bank of America....way down now right now