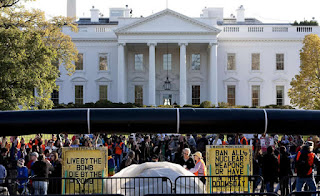 Headlines to Charlie Dent news releases are usually measured. Not this time. In headline that screams "President Puts Ideology Before Jobs and Country," Congressman Dent expresses his displeasure with President Obama's Keystone XL oil pipeline rejection. Here's what he says.

“With today’s decision to reject the development of the Keystone XL pipeline, which enjoys broad bipartisan support, President Obama has sadly placed ideology before country. The Keystone XL project is guaranteed to create thousands of quality American jobs and provide our nation with reliable energy resources needed to fuel our economic recovery. The President’s rejection of this slam dunk job creator is another disappointing reminder that he is more concerned with his reelection than helping Americans get back to work.

“While today’s decision may not be popular among most Americans, including members of the numerous labor unions who supported the project, I am confident the President’s rejection of Keystone XL was a major hit in China – a nation that will eagerly step forward in our absence to accept reliable supplies of energy from Canada.

“I am deeply disappointed by the President’s decision, which conflicts with recommendations put forward yesterday by his own Council on Jobs and Competitiveness. Sadly, this rejection comes as no surprise considering the President’s record of failing to adequately promote American energy security. I will continue to work in a bipartisan manner to ensure this critical project is not squandered.”

A Washington Post editorial also questions President Obama's judgment on this decision. "There are far fairer, far more rational ways to discourage oil use in America, the first of which is establishing higher gasoline taxes. Environmentalists should fight for policies that might actually do substantial good instead of tilting against Keystone XL, and President Obama should have the courage to say so."

What about Congressman Tim Holden? In October, he was one of 22 House Democrats to tell President Obama that "the proposed Keystone XL Pipeline represents a true shovel-ready project that would directly create 20,000 high quality domestic manufacturing and construction jobs for Americans who are desperately seeking employment. The project would also create an additional 118,000 spin-off jobs."
Posted by Bernie O'Hare at 1/18/2012 11:49:00 PM

Dent was just spewing oil industry talking points. The Keystone XL pipeline would be an environmental nightmare: besides endangering the Plains-states aquifer that provides drinking water to a region parched by recent droughts (why it is opposed by even Republican politicians there), it would sustain a bone-headed oil-extraction process in Canada -- using billions of gallons of water (depleting scarce water sources there) and massive quantities of natural gas (in fact, emitting more CO2 from burning the natural gas than is produced by the oil) that leaves behind blasted moon-scapes of debris and toxic ponds of fluids. All that to keep feeding our addiction to fossil fuels that is changing our global climate. (How do you like all that snow we've had this Non-Winter?) Don't drink Big Oil's Kool-Aid, Bernie :-)

And a few actual facts about the "jobs"and "energy security" that Dent touts:
-- the only non-oil-industry study of Keystone XL's impact on U.S. jobs, by Cornell U's Global Labor Institute, projected that the pipeline would have a NEGATIVE net impact on American jobs,
-- not only will much of the Keystone XL oil be EXPORTED from Houston to other countries, a stated goal of Keystone XL's promoter Trans Canada is to raise the price of gasoline in the U.S. Midwest and extract an additional $4 billion/yr. from U.S. consumers,
-- the new jobs Keystone XL's supporters claim come from a discredited study that projected more "choreographers" and "speech therapists" along the route (the U.S. State Dept. projects only abo[ut 6,000 temporary pipeline construction jobs),
-- the existing Trans Canada tar sands pipeline (in northern U.S.) has spilled over a dozen times in just its first year of operation, due to the unstable mix of corrosive raw bitumen and volatile natural gas condensates sent through the pipe at extremely high pressure.
Does this suggest Keystone XL makes any sense?

Heres a job creater for Dent and a big plus for the valley. Finish American Parkway and the new bridge.The moneys been allocated for years and the project shovel ready.Use your influence Charlie and jump start this project.Do something.

The pipeline cost is projected to be 7 billion dollars.
Built to take the tar sands to the refinerys in the Gulf area.
I have a question.
I read it costs 5 billion dollars to build a new refinery.
That is why they won't build new ones (15 billion profit quarterly for oil companies, i can see how building a new one would take a toll).


Why not build a refinery where the oil is, instead of transporting the oil to,


( old, outdated, in need of yearly upgrades, in the (coinciDENTly) spring, before the the summer driving season?

What bothers me about this whole debate is what happens if the pipeline does not get built? We forget Canada is a sovereign country and free to do whatever and standing several thousand miles away is China with an appetite for the oil. If the US does not build the pipe line China builds one to a Canadian port and begins shipments. That ends the environmental arguments against Canada's operations. What's more important for the US? I would say to help our balance of trade issues would be to refine the oil and sell the fuel to the Chinese. The US is an exporter of fuels and an importer of oils. Obviously we make some profit on the mark up. And, despite my disdain for the black goo, it heats my house and fuels my car. It's just too cold to get around by bike or horse. And, I don't have enough firewood to last the weekend.

Another aspect of the China connection is , if they send it to the left coast, wouldn't China use less oil from other sources?
Meaning more in the world reserve?
Oil is oil, we EXPORT oil.
Some people have a simplistic view of this.
Mostly the viewers of FOXnews. This will NOT lower the price of gas or oil.
They have us over a "barrel".

Who is to say that this oil will be used domestically anyway? I have several questions. How energy efficient is it to derive oil from Alberta's tar sands? Is it up there with ethanol production in terms of energy eficiency? This sand is taken from a boreal forest..what function does a boreal forest have on a global ecosystem? Will the pipeline go over or within a few hundred miles of the New Madrid fault line..the site of one of the largest earthquakes in American history? What is the actual number of long term jobs that will be created from this project? This is nothing more than a political football and not the solution to our long term energy needs. The oil will probably go to China no matter where it is shipped from.


This may be the future:
NASA has just put forth a video on Low Energy Nuclear Reactions (LENR). The website www.ecatnews.com can provide some insight.

If this is about energy independence, what percent of the oil passing through the pipeline would Dent insist remains for US consumption? If he cant answer that question, stop printing his nonsense.

Same deal with Anwar. No Exec would vow to keep the majority of that reserve in US interest.

Exporting will only lead to higher demand and higher prices. Just look how the price of coal has escalated due to foreign demands.

"Fuel is now the top U.S. export. The Associated Press reports that America is on pace to ship out more gasoline, diesel and jet fuel than anything else in 2011. (Aircraft, motor vehicles, vacuum tubes and telecom equipment were next on the list of top exports.) Granted, this is only for refined petroleum products — and those exports are still dwarfed by America’s much, much larger imports of crude oil. Still, it’s the first time fuel has been our top export in 21 years. So how did this happen?"

Good to see the Lehigh Valley's favorite son has been bought by the oil lobby.

It takes an awful lot of audacity to claim Obama opposes job creation after Congressman Dent and his GOP colleagues vehemently opposed the President's job plan which would have creates hundreds of thousands of jobs. I have great faith that Americans aren't as stupid as the Congressman thinks they are and will reelect Barack Obama.

I see all the slams at Dent. Yet Holden, who has the same position, is spared. I wonder why, but not too much.

Bernie,
Should the majority of that oil stay in US interest or not? What percent?

If he cannot answer that question, then this is about making a buck and not energy independence.

Stop printing this propaganda if that simple question cannot be answered.

If this is just about making a buck, doesn't it still mean lots of jobs?