Should We Switch to Weekend Voting? 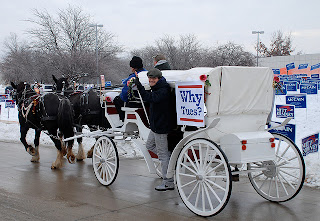 The skies opened up and the rains descended. There was even a tornado watch throughout the state for most of the day. But when the polls finally closed in South Carolina on Saturday, something strange had happened. Despite talking heads who sensed little enthusiasm for any of the Republican presidential candidates, over 600,000 Republicans chimed in, shattering a previous 2000 record.

It's still just 21%, but that includes Democrats and Independents, who are allowed to vote in Palmetto State GOP primaries. So what's the reason for this record?

Obviously, Newt Gingrich, Master Debater. Romney Robots hate it, but if nothing else, Gingrich's on-stage performances prove we all still like a good show.

Even more than those thirty-second negative ads.

But is another reason for this record turnout the fact that the election took place on a Saturday? According to one state GOP official, people are more likely to vote on a weekend.

Why the hell do we pick our presidents on a Tuesday, anyway? According to Why Tuesday, a non-partisan group, Congress picked that date for presidential races in 1845.


"We were an agrarian society. We traveled by horse and buggy. Farmers needed a day to get to the county seat, a day to vote, and a day to get back, without interfering with the three days of worship. So that left Tuesday and Wednesday, but Wednesday was market day. So, Tuesday it was."

These days, Tuesday might actually be the worst day to vote. Would weekend voting, spread out over both days to accommodate religious concerns, be an answer?

I asked State Reps. Joe Brennan, Bob Freeman, Marcia Hahn and Steve Samuelson if they were aware of any legislation, at least on the state level, to change election day for local and state races. Nothing has been proposed.

On a federal level, a GAO study is unable to predict whether switching federal race elections to weekends would make a difference in turnout. Gingrich, the beneficiary of a Saturday election, has previously claimed that election-day turnout is affected more by negative campaigning than the day of the week.
Posted by Bernie O'Hare at 1/23/2012 12:21:00 AM

We should absolutely switch to weekend voting. In many states that have primaries on Sundays, the turnout is much higher because religious institutions double as polling places. Absentee ballot laws, like the kind we have in PA, are unnecessarily restrictive, and some people don't have a chance to vote between the hours of 8am and 7pm. Tuesday voting is anachronistic (as is 3 month summer vacation for public schools) - and they are both tied to our agrarian past. Let's think outside the box on how to improve the status quo.

How quickly we forget.

In 2008, Tuesday voting didn't seem to hold anyone back.

Give the people something to vote for, and they'll show up no matter what day of the week it is.

I'd expect another record turnout this November.

I agree that the the last Presidential election brought many people out, and most likely that will happen again this November.

Nevertheless, as de Tocqueville noted, our local governments are our country's real strength, and local elections, when not coterminous, do not get the same turnout.

Saturday elections would most likely change the dynamics of local elections. I favor it.

And, I would love to get rid of the all-party button/switch! That would change the world.

Great post. I would love to see weekend voting, or a federal holiday for Election Day. The problem is that the Republican Party's position is that too many people are already voting. They're trying to push things in the opposite direction at the state level all across the country. It's messed up.

Eventually, I hope we will be able to vote securely over the Internet from home. Doesn't seem like the technology is too far off, but the politics will take a long time to catch up.

"The problem is that the Republican Party's position is that too many people are already voting. "
Actually not entirely accurate. Anyone who is eligible should be able to vote. It's the "eligible" word that makes libs blanch.
The Dems want the dead, the imprisoned, and the illegal residents voting otherwise they lose every election.

There's no such thing as voting securely from home. What prevents a Democratic operative from standing behind the person making sure they vote the "right" way? And you'd also then have to have 'free internet access at home' for everyone so that it's not discriminatory. Yet another government entitlement we can all pay for, along with lots of government employees to run the Department of Free Internet.

The only people who have off for Federal holidays are banks, government employees and the post office. The rest of the productive world has to show up and work.

And let's see, you need some sort of photo ID to get a job. Why is it that Liberals don't think photo IDs are important again? Oh that's right, getting a job is not important, it's more important to keep the poor on welfare so they are unable to take care of themselves and must rely on government for their very existence.

Other than all these points I think Geeting is right.

Haha, 8:55 is a paranoid Romney supporter. It's ok, the world isn't going to end because the Republican party can't get its act together.

I for one have no problem with photo ID requirements. But it should be 1 standard ID, free, easy to obtain, and is linked to a national voter database so that we can check in real time if the person who is voting should be voting OR if the person is voting in the wrong district. With all of the haphazard changes the GOP wants to make to voting rights, it only makes sense that the single most important right we have be protected in a coherent method.

Great points 9:39..Brennan is right on by strating that the last thing Repubblicans in this or any state is to encourage more voting..Recently they have been spending more time trying to suppress the numbers with all their ridiculous voter ID laws and their attempts to limit early voting..Anyone denying this is just plain ignorant..The proof is in the pudding, as they say..If they wanted it done in Pa. it would be done..They control all three branches of government. It's that simple....

Haha 939am can't recognize sarcasm, and Tomfoolery is paranoid worrying about all the black republican helicopters following him just like a coked-up Ray Liotta in Goodfellas.

One person legally entitled to vote, one vote. Real simple but flies in the face of Chicago politics.

They have voter ID in SC, where there was a record turnout. I do not think showing your license will suppress turnout, although I understand the concern. I'd argue use ID, but switch the day.

When we require a photo ID to vote is when I will support making voting easier for the masses.

Bernie, This was the 5th. South Carolina election I voted in here in Murrells Inlet. This was the lowest turn-out at my polling place.I was prepared not to show photo I.D. as I had my voters registration,S.S. card and birth certificate to show.No one at the polls asked to see anything but my voter's registration card.My friend and his wife voted up-state and his wife showed her license but he didn't. 'Southern Man'

Southern Man, Thanks for the perspective of someone who participated.

I don't have an issue with ID requirements, per se. But I do have a problem when a gun license is accepted but a college ID is not. College IDs are far more difficult to fake than a drivers license. A lot of people don't drive; why would they need to go pay for a drivers license? It's the 21st century, let's come up with a biometric ID that links to a national voter database. Let's vote on the weekends when most people don't work.

The problem is that the GOP refuses to even consider the concerns voting rights activists raise because their lily-white constituents would never be mistaken for illegal immigrants at the polls, so they don't have a problem limiting the vote for some, but not all.

I view the ID and weekend voting as distinct issues, but see where one might be traded off against the other. Of course, if you're in total power, there's no reason to trade anything.

If only we could suppress sucking on the welfare state's tit by requiring ID. Requiring ID doesn't suppress anything except fraud. Those who throw around false racism charges (Bernie does it about once per week here), are despicable and should have their IDs checked.

And if they have ID, then there will be a charge of fake ID's.

South Carolina, the rain man of states, should be an example to no one.

The "first" time they tried to secede from the union Pres. Jackson told the S. Carolina Governor if he did, Jackson would personally lead an army to the capitol and hang the governor for treason. The first S.Carolina session ended quietly. Sadly, the second S.Carolina secession didn't end as easily for the nation.

These idiots live on another planet and deserve to have nothing emulated, especially their governance models.

Geez. Not too extreme, are we?