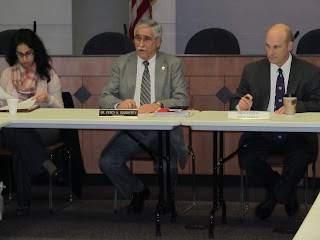 Despite the lack of a quorum, the Lehigh Valley Health Commission met at the Lehigh County Government Center on January 9 to select officers for the upcoming year. In a perfunctory election that Lehigh County's Percy Dougherty insisted was entirely proper, he was unanimously named Chair. The Vice Chair went just as easily to Northampton County's Peg Ferraro. But the absence of four Lehigh County Commissioners made it impossible for the Commission to do anything else, although they did take time to listen to a presentation and plea from the Health Board's Ilene Prokup.

"We feel as though we are in limbo," she complained.

The LV Health Commission is comprised of the combined county legislators of the Lehigh Valley, making it an unwieldy 18-member body whose actions require a majority vote from both Northampton and Lehigh. All nine Northampton County Council members attended the meeting being hosted in Allentown, but ironically, only Lehigh County Commissioners Percy Dougherty, Dan McCarthy, Vic Mazziotti and Scott Ott were present for a meeting on their own home field.

"We're outdone in our own back yard," joked Dougherty.

In October, Prokup and other local public health advocates proposed a five-year plan for four offices in Bethlehem, Allentown, Bangor and Slatington, requiring a $450,000 annual contribution from each County. County officials decided to delay a decision until after the election. Now, with eight new members in the governing bodies of both counties, Percy Dougherty stated that a new presentation would be helpful. He also suggested, as he did in October, that perhaps the voters should weigh in on this decision by referendum.

Those who did have questions were particularly bothered by the lack of cash assistance from area hospital. "We made the deliberate decision not to seek funds from the individual hospitals," stated Prokup, who explained they already provide a "tremendous amount of in-kind services." She also noted a potential conflict of interest because a public health department has regulatory authority over hospitals. But Lehigh's Vic Mazziotti noted that receiving in-kind services would create a potential conflict of interest, too.

Percy Dougherty agreed that area hospitals should provide "hard cash," but noted a ruling last year providing that cash contributions made directly from hospitals to the health bureau would be ineligible for state matching purposes.

Northampton County Executive John Stoffa solved that problem, noting that instead of giving the money directly to the health bureau, hospitals could contribute to the counties. "$250,000 is a quarter in their pockets," he argued, suggesting that a pitch be made directly to the Trustees at each major hospital.

Northampton's Lamont McClure worried that a LV Health Department could become a "bureaucratic leviathon," with rising County contributions. But Prokup answered that the Health Commission could simply refuse to fund the budget, as has already been done. "Just don't fund it," she suggested.

Mazziotti also questioned the empirical data that establishes that public health is better in Allentown and Bethlehem, which have public health departments, than it is in the rest of the Lehigh Valley. Prokup acknowledged her data are insufficient to answer that question.

Noting that the state has seen a decrease in revenue, Northampton's John Cusick wondered whether that would affect public health. He also pointed to layoffs last year in Bethlehem's health department. Because they have not really met since last October, Prokup stated the Health Department has had no opportunity to consider the impact of any budgetary cuts.

Before they adjourned, Dougherty assured Prokup and other public health advocates that each County will "hit the ground running" and have a decision by July. "It's only fair that we give you a decision as soon as possible," he acknowledged.

I'll guarantee anyone that there is no health crisis in the suburbs and rural areas of the Lehigh Valley that warrants the creation of a so called health department. Another attempt create a reason to raise taxes. When will this stop!!

pull the plug on this miscarriage

The creature that will not die. We can't afford basic mandated county services but this thing soldiers on. It just refuses to die.

This will be a test for the new "conservative" Republicans in Lehigh county.

The beast lives!!! Will someone please kill it.

Strongest volunteer effort ever. You can't kill it.

The dead horse, The Predator, the Alien, Heart Disease and the Association of Things Formerly Known as Things that Can't be Killed

Have to agree with 8:01..This beast refuses to die. The idea of having a health department now when many other Human Services are being cut by the state is just incredibly insane...The State is doing it's best to cut back monies to,or privitize, many human service functions now handled by the county. What do you think will happen once this monster gets its wings? The state will do the same thing that they are doing to the other county human services now..They will reduce or eliminate funding and county taxpayers will get forced to pick up the tab..This is a crazy, crazy idea whose time has not come..There is no cry from county taxpayers for a bicounty health department at all! So why even consider this..It's time to put a stake in the heart of this thing once and for all.

The Lehigh Valley Health Department is one of the dumbest ideas I've ever heard of.

How on earth has this county survived over 100 years without a Health Department!

This huge government mentality is crushing.

I request that the governing bodies of both counties put this entire issue to the voters as allowed under state law.

The time has come to get out of the shadows on this thing and let the voters decide if they want it via a referendum.

The proponents fear that and have tried to slip this around the great unwashed masses of voters.

Enough! To the holier than thou elected officials in both counties, stop looking out for my best interest while you buddies have their hands in my wallet.

Put this new jobs bill to a vote of the people.

I point to the Post Office as Exhibit A.

Let WE THE PEOPLE (i.e., the taxpaying citizenry) decide if this local attempt at OBAMACARE is, in fact, something we want to put up with.

When are they going to get it through their heads that the hospitals want nothing to do with this thing? If they did, don't you think they would have given money to it ages ago? They don't mind doing the inkind services because they can write them off as "donations" and keep their non-profit status (except for Easton who wouldn't even give a dead horse away). Time to face reality and pull the plug.

If this is true, then the plug will be pulled. If the hospitals are willing to kick in, the counties likely will support it as well.

What boggles my mind is that the LV Health Board made a conscious decision NOT to ask for support, despite being TOLD by several Council members and Comm'rs that this is exactly what is needed.

They will give a wink and a nod to giving the counties money. People like Comrade Stoffa will use this to again con the county council. Once this beast is up and running the hospitals will take their "contribution" and run.

Guess who will be left holding the bag. People do not want this. special interests want this.


There is no law preventing the hospitals, the Business Partnership and the Chamber of Commerce from creating a private community health board for the benefit of the Lehigh Valley. Funny how conservative groups love spending taxpayer money on "their" socialist programs.

If you want taxpayers to fund this turkey, put it on a ballot. You won't though, will you?

It is certainly true that hospitals could withdraw funding. But without a commitment, this will not pass. With a commitment, it will.

There is some movement to put this on the ballot, where I suspect it would pass bc the public will never be informed of the cost.

Handing over health care services management to politicians who can't master basic tasks (like fixing potholes and making city payrolls without borrowing) is just plain stupid. Cost overruns and waste will be deemed "nice" or "only costing teabaggers a cup of coffee per day."

We've all seen this movie and we know how it ends.

We have no money for new misadventures.

How much OBAMA/LEHIGHVALLEYCARE can a $ 160 million dollar PAWLOWSKI PALACE of SPORT buy?

Can't imagine the new Republican body in Lehigh County will support this and McClure and Kraft have , in the past, said they couldn't support this at this time..Along with te three conservative Republicans, itshould die here also. Thank God! So why don't they just kill it already..I am tired of hearing about it..The County taxpayers don't want the damn thing and I'm sure they don't want to pay for it so stop the madness already..Bad, bad idea!!!

One does not need to stop something that was not started.

Why do we want to stop discussions around improving health? Why are so many people threatened by this topic? The conversation around improving health will never stop. It's critical for local government (responsible in many ways for our safety and well-being)to be having this discussion. I think the elected officials are doing a good thing by trying to figure out how to balance improved population health with good fiscal stewardship. Keep the discussion going until we can figure out a way to do this right.

In a world where local government is run by Barrons and Pawlowskis and Callahans, are we really contemplating greater government involvement in something so important? Please.

Can't help agree that the 4 newly elected Republicans in Lehigh County spoke against the Lehigh Valley Bi-County in the General election .... It might appear strange that they pull a turn-around and vote funds for the Bi-County Health Department ...

We don't want to stop discussions about improving health..We want to stop discussions about a bureau the County cannot afford and doesn't really need. In the best of times this would be a questionable venture..Right now, it's just crazy..It's a matter of priorities.. Other Human Service departments are facing shortfalls, thanks to the State..Aging, Children and youth , MH and MR are looking at a bleak future..Let's take care of what we have now before moving in a foolish new direction..

anon 4:21, If the new an improved "Conservative" Lehigh County commissioners vote for this public job making boondoggle, they will be relieved of duty as quickly as the last "Conservative" was after he allowed a 16% tax increase.

You cannot conduct any business without a quorum. What's up with that?

Have no fear. It will likely take a good ole fashioned plague, toxic chemical attack or bed bugs in Bangor to get this good idea up and running.

Small minded we think we know everything local yokals. If there is a plague or some pandemic or epidemic, can you say Federal CDC? Can you say, maybe the PADOH? No local health department would even be able to handle a major outbreak. But in the meantime, there are some that think we ought to waste taxpayer dollar for some false protection.

According to Dougherty, they could elect officers bc there was a quorum of the total. They may not take action w/o a quorum of each body. I admit I did not research the question of reorganization, and will defer to Dougherty on that point.

Put the think in a sack and beat the crap out of it. The people don't want it. Please go away.