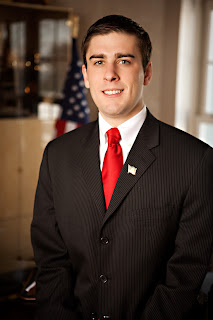 Late last month, I told you that teachers' union advocate Kevin Deely plans to run for Justin Simmons' seat in the state house. But he'll have to beat Simmons first. The freshman state rep. has issued a news release, announcing his intention to seek a second term.

COOPERSBURG – State Representative Justin Simmons (R-131) announced today that he will run for re-election to the Pennsylvania House of Representatives in 2012.

“During my first year in office, I have answered the public's call to restore fiscal discipline to state government and have focused on making our state more competitive in the national marketplace, but there is more to be done," said Simmons.  "While we have taken the right first steps, restoring our economy, due to eight years of over-spending and over-borrowing by the previous administration, will take time."

Simmons outlined several successes from his first year in the State House, including:

-       Passing a balanced budget by the constitutionally mandated deadline (the first in eight years) and without raising taxes;

-       Focusing the state budget on priorities like education funding despite the loss of billions of dollars in federal stimulus funding;

-       Making Pennsylvania more competitive in the national jobs marketplace through initiatives such as the Angel Investor Tax Credit, and reforms to the state’s tort system, workers’ compensation system, and business tax reductions;

-       Passing legislation that would commit 100% of all gaming revenue to property tax relief;

-       Supporting new laws to give voters a stronger voice on property taxes and making the legislature more transparent to Pennsylvania residents.

“As 2011 began, Pennsylvania faced multi-billion dollar budget deficits and the legislature faced a simple choice: reign in spending or force tax increases on our citizens.  No one can afford more in these difficult economic times, which is why I worked so hard to finally bring fiscal sanity to Harrisburg by refusing a tax increase or increasing debt in the budget process,” said Simmons.

Elected in part on his pledge to reform Harrisburg and restore the public’s trust, Simmons said that he has kept that promise.  Simmons refused perks like a taxpayer paid automobile and per diems, refusing the taxpayer-paid pension, and returning the COLA for both 2011 and 2012 to the state treasury.  Simmons also supported the successful effort to force House members to pay for a portion of their healthcare costs like those in the private sector.

“I ran for this office to try and make a difference for local residents and Pennsylvania, not to take part in the perks of office.  I promised to turn my back on those perks and have kept that promise,” commented Simmons.

Looking ahead, Simmons said there is more work to be done to keep Pennsylvania on a course toward economic recovery.

“I will continue to work to ensure education funding remains a top priority in the budget, and push for further reforms to our state’s tax structure to help lure new job creators to our state and encourage current businesses to expand and create more jobs,” said Simmons.  “I’m asking for your continued support in the upcoming election.”
Posted by Bernie O'Hare at 1/19/2012 12:46:00 AM

He's going to have a tough time of it. Voters in his new district usually like their politicians to have cleared puberty and not be Elmer Gates' puppet.

He better be even more visible than Doug Reichley was to get over those hurdles, and so far he hasn't been.

Not cleared puberty? He has a 5 o'clock shadow at breakfast meetings.

He doesn't have has much facial hair as Karen Beyer or Lisa Boscola but then not many people do.

He's all grown up now and has finally moved out of his parents house thanks to his Harrisburg salary...His district was redistricted to add a bunch of Republicans so no matter what, he'll be tough to knock off..

So Justin Simmons supported legislation that simply passed the tax burden down to the local level. Hardly reform.

"Passing legislation that would commit 100% of all gaming revenue to property tax relief."

Why not a similiar approach with Marcellus?

Lets follow Corbett's lead and make keep 75% of the gaming share local. Then maybe municipalities that are not 3rd class or contiguous to Bethlehem can benefit.

“I will continue to work to ensure education funding remains a top priority in the budget".(Laugh)

This comes from a guy who supports taking money from public schools and giving it to Charter Schools! He said anything to get elected a couple years ago and will do it again.

Simmons what a bastard... Taking money from the teachers union and giving it to non-unionized teachers at charter schools that get results!

Screw the old people that can't afford to pay their school taxes. Make them sell their homes and move into a nursing home. Teachers need a raise!

and free pot for students

most pols are nothing but sluts to whatever is the most popular cause at the time. vote for no one, we'll be better off.

Justin is the kind of real person that is needed in Harrisburg. I thank him for his efforts supporting us private citizens.