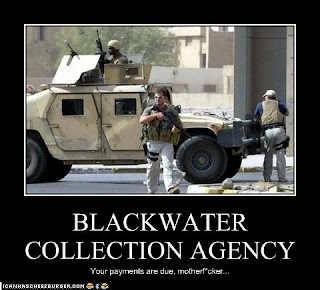 If a judge orders someone, in a criminal case, to pay a fine and costs, we'd all like to think that it happens. If he orders someone to make restitution to a crime victim, we'd like to think that happens, too. But all too often, it fails. We've seen that with Susan Eagle, where in one of her cases, there actually is an outstanding bench warrant. In addition, judges often release Defendants from probation before they've paid. Without the hammer of a bench warrant or jail time, they quickly stop paying.

Under these circumstances, perhaps the stupidest thing a County could do is hire a toothless collections agency. So naturally, that's what we've done. Lamont McClure led that effort in 2006, predicting the County would get about 3-4% of the total owed.

Well, that hasn't worked. In 2009, crime victim Roy Shuman (no relation to the party boss) told Council that he was receiving regular restitution payments for a break-in at his business until the matter went to a collections agency. After that, he got nothing.

Last year, Criminal Division Clerk Leigh Ann Fischer sent $9.3 million in unpaid fines, costs and restitution to the County's newest collection agency, Modern Recovery Solutions. There are tens of millions more outstanding, and a newly hired accountant is trying to piece it all together. But that $9.3 million was for starters.

In that year's time, the County has collected less than $2,500, reports Fisher. That's 0.02%, about 1/20th the amount predicted by McClure. "It's minimal," she admits. "Our hands are tied," adds Director of Court Services Archie Disidore, who notes that Defendants often change addresses and there is little a collection agency can do, especially compared with the power of a judge.

Even a judge's powers are limited. He can't just send someone to jail for not paying a fine if he has no financial ability, and there is a limit to how long someone can be placed on probation. But I believe judges could probably do more, especially if they are actually interested in justice as opposed to processing cases.

If the County were able to collect more of this money, it would both be helping crime victims and easing the tax burden. But the problem is being ignored.

When Susan Eagle contacted Controller Steve Barron in April, he had a perfect opportunity to do the job he was elected to do. According to the Home Rule Charter, he has a duty to audit all agencies to determine the "efficiency and effectiveness" of any program involving money. But Barron has conducted no audit since a collection agency was brought on board to determine the "efficiency and effectiveness" of the new system?

Barron's predecessor, John Schimmel, did do such an audit, and found the collection agency wanting. He noted that improvements were needed and that the longer a case sits idle, the less chance there is of seeing any recovery.

But that was when we had a real Controller.

Your point at the end is important. The courts need to do more. Regardless of what Barron or Stoffa does it's on the courts.

Didn't that Schimmel fellow have a 100,000 embezzlement scandal happen in the criminal division?

Schimmel was Controller when that occurred. It had been occurring for some time. He was just the fall guy for a smart thief. The head of the Division should have been on top of that. In the end it cost Schimmel his job. Barron had a political hired gun make it a campaign issue. John Schimmel was too nice a guy to bring up Barron's baggage and he lost a close race.

Even with that incident, which is a stretch to blame on Schimmel, he did more in one year than Barron has done in four.

Also John Schimmel was not a political hack but a CPA dedicated to his job and not looking to the next office he could run for.

Had the Republicans found a real competent candidate for Controller and spent a few bucks, Barron Von Footinmouth would be history.

Barron could and should do another audit on this issue but he won't because everything he does is based on who will help him politically. He is one of the reasons other counties laugh at Northampton county.

good blog bernie. hopefully this will wake someone up and get something done

This is on the courts. It's what NorCo's part time judges should be doing when they knock off at lunchtime, sending their tipstaffs home with a full day's pay.

Unfortunately for the people of Northampton County, Steve Barron isn't even half the Controller that John Shimmel was when he held that job. Schimmel is no political hack and is a real CPA, unlike the current office holder. Northampton County voters made a big mistake when they voted in Barron over Schimmel. I only wish John would have run again.

Schimmel is a PA not a CPA. Big difference!

Yet another example of trough feeding losers who can't get it done.

Troughfeeders suck, now and forever. If all I was capable of was government work, I'd take the pipe.

"This is on the courts. It's what NorCo's part time judges should be doing when they knock off at lunchtime, sending their tipstaffs home with a full day's pay."

Like I said, the judges are not God. They do have limits. I do not think they can keep someone on probation indefinitely. But I do think they could do more than they have. In addition to getting restitution to crime victims, those fines and costs would reduce the tax burden. I believe the courts should be invited to provide their own perspective, and they should be given deference bc they have to look out for everyone. But if they snub us, as Barron snubbed Eagle, we will have a remedy at the ballot box and at budget time.

What baggage did Barron have in the race with Schimmel? How come in his headlong rush to pile it up on Barron, Bernie hasn't told us about this?

So you and your following will produce 16 anti-Barron votes at election time.
Much ado about nothing.
Vindictive comes to mind.
You should try channeling your hate into something positive. You'll feel better.

So how much is owed in the other counties around us? and what is the collection % that they get for their victims? Is it us or is it a pandemic?

Get on it Bernie

Oh it's a pandemic to be sure. I will have more tomorrow. To the commenter who thinks this is just about poor Barron, it's about the many people ignored by our system, which includes hacks like Barron.

Good point Bernie. People have put this guy on an alter and are angry when others point out what a terrible public servant he really is.

You never saw such blatant political pandering as this guy showed during the Gracedale debate. He mad ea lot of noise but said and did nothing of consequence other than get spanked at a public meeting by Ron Angle and you would think the guy has solved all the problems that still exist.

Unbelievable and I am a union member.

Unbelievable and I am a union member.

And a Republican tea bagger

Real Rs don't teabag. Ds have an entire interest group devoted to it. Hell, the term was coined by Anderson Vanderbilt on CNN. Barron would do well to wipe the tea from his eyes and stop exploiting crime victims for votes.

I thought the term was coined by Santelli of CNBC on the trading floor of Wall Street.

Glenn Beck coined the term teabagger. Maybe he had a flashback.

Im an ex prisoner and i paid my debt with years of my life and ill b damned if i give the county my money when my record makes it impossible to get a job anyway,i was a stupid kid and im paying for the rest of my life kiss my ass throw me in jail my money will b there when i get, the county isnt helping me but they sure do have their hands out...