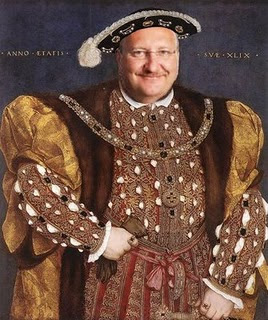 Several informed sources tell me that Allentown Mayor Ed Pawlowski plans to run for Governor. His wife has wanted him in the Governor's Mansion since he was first elected in the Queen City.

She claims it's God's Will.

I don't know much about God's Will, but do know year end financial reports are due soon. Pawlowski consultant Mike Fleck has been telling people that Hizzoner raised $400,000 over the last year, and has even formed a statewide PAC.

We'll see what the reports say when they are filed.

not convinced Pawlowski is a top tier candidate. Rob McCord probably is the best shot. I will say that the current governor is a disaster. we are in serious trouble in PA and the 100% Republican led capital is entirely responsible for it. That's right... 100% Republican led. It's your fault!

But what about God?

JOKE!!!!!There has to be better choices out there. He definitely doesn't have what it takes to be governor. He needs to wake up here and so does his wife.

He has the personality of a dachshund that is humping your leg. I can't see it.

He has NO CHANCE IN HELL, when has a polock been elected statewide, I mean I understand here in allentown where everybody eats pirogues and drinks ale, but state wide, the guy is a little troll and Mike Fleck is a fool to tell him otherwise.

I can't wait to see the report too...

He's arguably the area's most popular politician. But he's not going anywhere soon. Pennsyltucky does two things consistently (other than cling to guns and religion). It 1) re-elects its governors and 2) switches the governor's party every eight years. Ds know they need a sacrificial lamb for this round. The best candidate must have a large ego and a low political IQ. I think we have a winner (whom history shows will eventually be a loser).

Oh did I just say that publicly? Happens when people make promises and never hold to them. BTW, I hear Admiral Joe Sestak will run as well.

I have a feeling Mr. Pawlowski will do well just look how great Don Cunningham did in his bid to run for Governor.

Little fish swimming in big ponds with the sharks are funny to watch.

The area's most popular politician? Compared to who- Angle?

Pawlowski for Governor? Seriously. The most popular politian in the LV.....HUH?
Ask anyone in Bethlehem who Allentowns Mayor is.....the response will be ammuzing.

The $ 160.0 million dollar PALACE OF SPORT has to be a springboard to bigger and better things for Pawlowski politically.

I bet Rendell is shaking in his boots.

The arena project will probably end up like the desolate feild that Zarwaski left on 8th st. Palumpashitsky's hairbrain ideas always run out of money. This is all Karoly and Mendelsons plot that allentown will be a jaunt to the big cities.

will the last person to leave PA please turn thelights off......

Harrisburg is already broke - it's the perfect place for Pawlowski to go spend all the free money coming our way! Nobody can make a broke place even MORE broke than Pawlowski.

"Pawlowski Courting Philly Campaign Donors" - I do remember that story, and as I recall, everyone who wanted a piece of the arena pie showed up to donate. Can I say this reeks of pay to play here?

No one else has the requisite courage, apparently.

Perhaps you can take up a collection to pay for his (one-way) plane ticket to Harrisburg.

Of course, the flight has to leave from Queen City Airport!

What does that do for Mike S. with his Pawlowski, Cunningham and Mann endorsement

Allentown's only hope of relief depends upon some other entity taking Ed. I fear therefore we are doomed.

which then raises the question...what does that make you?

Could Be Fleck said...

Just got in from delivering the route. I appreciate the free pub. I'm using unorthodox methods to raise lots of cash for Mr. Ed. While others are utilizing new media, I've gone old school and am willing to share some techniques. God bless.

Could Be Fleck said...

Is Hizoner and the Mrs. going to take the arena with them?

On Mayors Contributions,fleck is correct 300,000 to be reported for 2011 and Fleck is the Bagmanwith the 100000 Cash to e used for buying support for the Mayor.

He could not get elected dog-catcher outside of A-town where all you need to get elected is a "D" after your name, no matter how much of a joke you are!

Bullshit,2:51 PM Look at the Republican turnout compared to registrations. Pathetic to say the least.Cant you find anyone that fits the bill?Can you all agree on one and all get behind him?You reps are all talk,no action when needed.Dems are not much better.Last prez election was like American Idol this one so far like Dancing with the stars.Hot one week, shit the next.Politics the breakfast of champions.

Will the king be taking his court jesters as well as his king clown the city con TROLL er and prez.

Wheres Woodman at? The great shaper of all things political. He got three talking heads in county positions. What about the city of Allentown? He is not a leader if he cant shape a future for republicans in this city.A "D" after your name? Is that how Scott got on the school board?

Will happen when the arena is a success i.e. never

Does this mean that a Harrisburg Brew Works is in the planning stages?

Ed Pawlowski and his poor workers should be banned from the City of Allentown.