What Will Happen to the Ten Commandments? 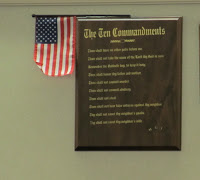 With Ron Angle on his way out the door as a member of Northampton County Council, he last night questioned what will happen to a plaque of the Ten Commandments he hammered onto the wall of their star chamber in 2002, when he under fire for making insensitive remarks about Jews and blacks on his radio show. Some questioned his sincerity and claimed it was just a diversion. But it's been there ever since.

It's as good as gone. The Godless, replete with their fake reverend in fake mustache are in charge now.

Why doesn't he take it with him to his next stop, Dante's 4th Circle reserved for the avaricious.

leave it up - it's the only piece of sanity in the entire building.

Even God can't save NorCo, with it's own anti-Christ parading as a man of the cloth in that pasted on mustache, sentencing old souls to continued abominable treatment at the hands of strangling Disgracedale goons.

They should go with the publicity stunt barker that put them there. was never anything but a stunt to begin with.

It offends me as a honorarium to a single religion.
Let us place the Muslim equivalent next to it, and the Hindu next to that, and the Satanic next to that....
BTW the last time I looked I don't remember seeing the cost of a ticket to heaven being 5 million dollars.

Ron should take them with him and try reading them and living by them..Maybe then he'd give up his fight to take the remaining 5% of his father's estate.

one does not need words on a wall to live by them....

As far as I am concerned his little billboard and his little flag should be sent home with him, much like the belongings of the Occupy folks were "cleaned"out.

Those were nothing but props to take your eyes off the master manipulator while he enriched himself and broke every commandment listed. If next years council president has any balls, he will have them packed up and sent to Angle.

No more theater, lets get real.

Let's be fair and balanced in your reporting. It is possible that he didn't violate every one of the remaining commandments.