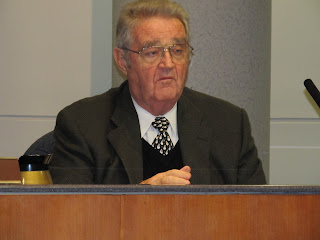 I ran out of space on my flipcam in taping the final remarks of Lehigh County Commissioner Bill Hansell on Wednesday night. If you've attended just one Commissioner meeting in his two years as an appointee, I'm certain you heard him mention at least once that he helped write the Magna Carta, Declaration of Independence, Penn's Treaty, Northampton County Home Rule Charter and the script to the Rocky Horror Picture Show. And this loquacious Irishman may very well be right. He had a three "quick" points, which were excellent:

"First of all, local government and local democracy is where citizen interaction with our government happens most directly. Whether you agree with the people, whether we agree with them, when you vote, you from 'em. If you disagree, you hear from them. And it's in your face. It's not a letter to Washington. It's not a letter to Harrisburg. It's not a phone call. It's direct and personal, and that's how democracy is meant to work and where it works most effectively.

"Secondly, ... we are about very important things for the quality of life. ... "