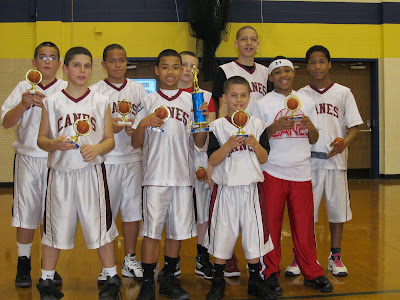 While most of us were sitting on our fat asses over the Holidays, eating bon bons, seventeen teams of 6th grade boys from all over the Lehigh Valley were running up and down basketball courts at William Allen High School. In games played between December 26 and 31st, the Bethlehem 'Canes came out on top, winning each of their five contests.

On Friday night, the 'Canes were down 10 points to Allentown's Downtown Youth Center when the buzzer sounded at the half. But this Liberty High School feeder team dug down and exploded in the second half, winning by ten.

On New Year's Eve, as parents nursed hangovers, the Canes squared off against Allentown's East Side Youth Center in the Championship game. East Side was exhausted, having played three games earlier that day as a result of being in a loser's bracket. So the Canes came out on top, but every one of them would tell you the game could have gone the other way if East Side had more rest.

Hey Bernie. I'm pretty sure I notice a theme here. Are you one of those overbearing grandparents that makes sure their grandkid is in the center of every picture?
You don't start fistfights in the stands when things go wrong do you?
I'm just kidding . Congrats to the boys and Happy New Year to you.

I had a great time in the stands, talking to the parents. Many of these kids know each other and have played together and against each other over the years. It's hard not to root for them all, and that's pretty much what I do. I like to see the Canes win, but like it even more that they are making friends and learning.