No Transparency in Pa.'s Congressional Redistricting 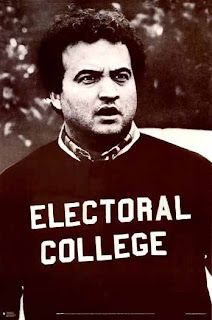 Congressional redistricting is done every ten years, after the census. Pennsylvania lost a seat, dropping from 19 to 18 districts. The dirty deed is done by the General Assembly, subject to Governor Corbett's veto power.

Senate majority leader Dominic Pileggi, back in January, promised to "make the redistricting process as transparent as possible."

He must have forgotten. In early December, State Rep. Steve Samuelson handed me the Congressional Redistricting bill his committee would be voting on in two days. For each of Pennsylvania's 18 Congressional districts, all it said was this: "The [take your pick] District is composed of a portion of this Commonwealth."

Bill Patton, press secretary to the House Democratic Caucus, explains just how transparent the process has been.

· There were three joint public hearings of the House and Senate State Government committees.


· These events occurred more than six months before any member of the public (including most legislators) got to see the actual Republican redistricting plan when it was finally disclosed this week.


· None of the testimony at the hearings addressed the Republican plan.


· A total of 22 people (combined) spoke at the three public hearings.


· Only three speakers appeared at the final hearing in Harrisburg, which lasted 32 minutes.


· The duration of all three hearings (combined) was 3 hours and 18 minutes.


· At the Butler County hearing, both chairmen McIlhinney and Metcalfe confirmed that no actual plan was yet proposed or under consideration. They referred to any maps reported in the media as “purely hypothetical.”


· At the Butler County hearing, Rep. Metcalfe said “Our goal is to produce a final product … that (we) intend on reviewing at another public hearing …” Sen. McIlhinney added: “We’re going to hold a series of hearings, or as many as are needed, to finally do this in an open and clearly visible way in Pennsylvania. … We’re really making a true, honest effort to be very public and forthcoming with this process. … we’re trying to do this in a process that you can clearly see …”


· At the end of the Harrisburg hearing – which was the last public discussion before a map was unveiled this week – Sen. McIlhinney committed to call for “further hearings as needed” and to come back “in the early fall” for additional public discussions on what a map should look like. Rep. Metcalfe chimed in that he looked forward to scheduling an “additional hearing or hearings as needed as we move through the process.”

After six months of public silence, zero public hearings, and a few hurried weeks of clandestine negotiations, on Wednesday morning, Dec. 14 the people of Pennsylvania were finally given access to the genuine article – a Republican congressional redistricting scheme created by Republican Party insiders for the benefit of Republican Party insiders. The claim that public input had any influence on the final Republican plan is pure fiction.
Posted by Bernie O'Hare at 12/16/2011 12:00:00 AM

The arrogance is appalling...

The 7th,10th, and 15th are text book examples of "gerrymandering". Anyone who says other wise is a bold face bullshit artist.

what was it obama said when confronted with a similar outrage he committed?.....

This is not the best solution for our region. We lose continuity and the common thread that binds our unique region.

Make note of who voted for it, I am.

Marsha Hahn is in favor of tearing apart the Lehigh Valley and by doing so will not be getting my vote in the next election. Yes, I'm an elephant!


Obama has nothing to do with the redistricting process..You need to stop watching GOP tv and find out what's happening in the real world.

8:09, So far as I know, the House has not voted on this plan yet. Please correct me if I am wrong.

And anon 6:44...."we won" isn't a great response because these districts don't really help anybody. As a resident of the Lehigh Valley, you should be upset that our area has less of a voice in Congress.

Charlie Dent will now represent hershey park and the North side of Bethlehem, but not the south. Tim holden will represent South bethlehem.

Even Elbridge Gerry would roll over in his grave.

The Senate passed this pathetic plan by a two vote margin..The House is voting next week..My expectation is that it will pass. The Republican legislators in Pa. should be ashamed but actually they don't give a damn what we think..Hell, they have better districts than they've ever had..Also, their jobs are much more secure, so screw the voter..

As someone who will be with many of you in the 15th. (From Tobyhanna)! I would just like to note, my township went strong for Democrats in 2010. (Go figure Latinos who are a major part of our population didn't dig the race baiting of the Barletta camp).

See they took every area that will most likely not vote knee-jerk red and tried to lump them into Holden's district. Why?

Easy, Holden is a"Blue Dawg" Democrat. Or, a somewhat Conservative Democrat so a very unlikely threat to their issues.

Sad day for Dawg the Congressman, those of us Democrats on the easter side of his district may seek to "primary" him with someone from our side of the district. Considering now the eastern communities like Tobyhanna, Easton, South Bethlehem, will outnumber his base in central PA significantly, this may be an egg about to explode in the GOPs big red face.

As a member of the Monroe County Democratic Committee, I will NOT be shy at our next meeting making that point.

I would like to see some help from my fellow Democratic Committee people in the Valley. *cough* *Bernie* *cough*. Since we want to have our area represented in DC.

Pardon me, the 17th not the 15th. Hard to keep numbers straight with this type of gerrymandering. Glad I don't need to keep track of the 7th.

Hahn (R) is on the committee and her yes vote was to get out of committee to the house floor for a vote.

Any bets on what her vote will be?