Angle & Browning: You Won't Have Us to Kick Around Anymore 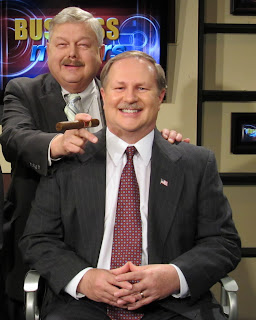 If you're expecting bitterness and sour grapes, there was little evidence of it yesterday, when two losers - Ron Angle and Dean Browning - appeared as guests on Tony Iannelli's Business Matters. They were there to answer this question - What the Hell do voters want, anyway?

Apparently, not Angle or Browning.

Angle, a 12-year veteran of Northampton County Council, was its President in 2010. Browning has chaired the Lehigh County Board of Commissioners for the last two years. Both were defeated at the polls.

Dean's defeat comes from those who want less government and less spending. His conservative credentials were called into question. This is because he refused to go along with a kooky scheme to send a budget back to the Executive, after he had spent most of a year working with Cunningham on the finances with no help from other Commissioners. Dean then bucked his own party and voted for a 16% tax hike, never a popular thing to do in the best of circumstances.

Never mind that he voted his conscience.

Angle's defeat is a bit more complicated. There were many factors, some of which were his own doing. But a major factor in his loss is that he was the Poster Boy of the Sell Gracedale movement. His defeat comes at the hands of those who want more government and more spending.

Never mind that he voted his conscience.

They were both smiling yesterday, in pretty good spirits despite stinging defeats. "The Emperor has been dethroned," joked Angle. "I'm in consultation with the military and we seize control the 1st of the year. There will be hell to pay." Off the air, he told me I'm the only guy he's ever seen who has a head like a condom, and wondered whether I was there to do a Trojan commercial.

This is my friend.

A little more reflective, Dean Browning has a pretty good explanation for what happened. He noted most voters have very little interaction with County government. They have little need to dial 911, use Human Services or sit in a courtroom. Those things all cost money, yet there is little room to cut. "People want less taxes, less spending and they want all that without a reduction in services," he noted. "If they [the new Commissioners] can do that, we ought to send them to Washington." Angle calls this the "Gimmes."

Paraphrasing Henry Clay, Dean added, "I'd rather be right than be County Commissioner."

In his four years as a Commissioner, Dean made government more transparent and accountable. Thanks to him, campaign finance reports are now on Lehigh's web page. He also spearheaded the movement to videotape Commissioner meetings. He also pushed through legislation that required unions to make concessions. He will be missed.

Then Dean started asking me why my head looks like a condom, and ruined it all.

Love the photo! These two should do a TV show, something sorta political and invite a guest per segment. They could call it "From Our Side."

Bernie
You were going to try to find out that website that lists state salaries.

They probably would have won if they did what their constituents asked of them. Consider that?

Conscience??? Now that's a novel concept for him. No, to the contrary, it was well developed long ago. His consciense said, take Donald Snyder to the bank. This poor old incomptent man may not know what he is doing but he wants to give me money. Money? Money!! Let your conscience be your guide.

Voters who ousted Angle "want more government and more spending?" No, what you Repubs fail to understand is that it's not the spending, it's taking care of the people in our society. If that means more spending then so be it but it does not necessarily. For instance, cutting ludicrous Open Space spending and using those funds to support our poor and elderly would make sense. Making this some mad desire to have a government overlord to whom we give all of our money is a bullshit argument from those in a weak position.

They lost an election like million before and since. Life goes on.

Neither of them are legends, except in their own minds and yours.

In the case of Ron Angle, his conscience and his wallet are synonymous. His penchant for attention seeking had finally hit critical mass.

At least his old buddy Iannelli gives the old anti-semite a stool to sit on to boost ratings. What does this have to do with business again? Local chamber members still would like to know.

The shows producer Mike Schlossberg should be ashamed of himself having Angle on that show. I know some people who will no longer contribute to his campaigns due to that.

There is also a link that gives more info:

But I understand the state itself is supposed to have a web page soon and am trying to track it down.

Dean Browning never would have been ousted in a General election, however, he never got the chance..His stand in lehigh County was a profile in courage and , thanks to him, Lehigh County finances will be sound for years to come...Angle, however, was defeated in a general election, meaning he was ousted by voters of both parties..Yes, Gracedale had a part in the defeat but the issue of the second will, his uncerimonious loss of the council presidency ( by members of his own party) due to his tendency to slash and burn everyone and everything in his sight, and finally his support of the immigration detention center in his district (from whose owners he graciously accepted $3000. in campaign funds)Looking back, it's amazing that his election was even close...Certainly the Press will miss him, probably as much as Jon Stewart"s comedy writers will miss Herman Cain, but it won't be due to his dedication to duty..I'll give Ron this. He was a shrewd as a fox, and despite being so damn aggravating, he spent more time on County Government than any other county official. However, even he had to realize that events of the past year conspired against his reelection this year...Some might even say that God had a hand in it..If that's the case Ron should be duly chastised, but flattered that God took the time to take notice..

Dean Browning is the biggest phony in the Lehigh Valley! He spent over $100,000 in the primary sending out 12 car size mailers trying to convince the voters he was a conservative. They did not buy his lies. He lost. Big. He was wrong AND he will not be a Commissioner in 2012. Justice was served.

Sort of like getting your picture taken at a Beach Boys concert in the late sixties.

Then seeing it plastered on Life magazine only to realize Charles Manson was next to you smiling like you were BFF's.

I'm sure the teabagging Republicans who live to destroy government were thrilled with his loss..No one who gives a damn about good Government was pleased..I mean seriously, right now the tea nuts are supporting newt Gingrich for President..This is after supporting Herman Cain and crazy as a loon Michele Bachman..I dont see the Conservative right wing nuts as a great judge of good candidates..As I had said, if the full electorate of lehigh County had chosen instead of a small portion of right wing whacos, he would have been elected handily..

The photo makes it look like Angle is trying to pull a Sanduskey on Browning. Browning is taking it in the keister from every Angle. LOL

Anonymous 9:07AM
Gracedale is a money pit. You will see a tax increase at the county level for several years. Who will benefit from this increase? The inhabitants? The taxpayers? Or perhaps the unions? And let us look at all the benefits from the unions. No more textile industry in the area. No more steel industry in our area. Cement coming into our area from China at a cheaper price. Costs on the building of schools going up due to the prevailing rate from Philadelphia. And least you forget, your school taxes will probably go up yet again as will the local taxes.

I agree with Chris, these fucking teachers unions are fucking killing us!!!!!

Should the Commonwealth GOP get what they want for State Senate districts, Angle should run for the Republican spot in the primaries. Just a thought from a former Easton resident now living again in Mt. Pocono.

"No one who gives a damn about good government was pleased."

You speak for all people who care about good government?

You probably think that you do. You don't. But I can see why you supported Dean. The two of you think you are so much smarter than everyone else. Your not. You lost. Get over.

P. S. You are also crude, talking about "teabaggers". We really don't want to hear about your sex life.

Chris should know being a former member of a teacher's union..Bet you have a nice pension Chris..

Chris Miller, you're an educated man. Instead of just repeating your tried aand true anti-union rhetoric, might I suggest that you get a copy of "30 Years Under the Beam" by Frank Behum It's a compilation of the stories of a variety of people who worked at the Bethlehem Plant. And they're from union, non-union, and management alike. Big Steel's demise was not simply a matter of USW pricing them out of existence; it was much more complicated than that.

Good government my ass. Flea baggers should spend more time keeping up and less time getting stoned and shitting themselves and begging for handouts. They're unemployable bilge and it's everyone else's problem.

This is a heads up
You have so much crappola posted in here, your site loads like I have a dial-up connection.
I went to a friends house and it is the same there. I have super fast internet and a fast computer.
So I am not the culprit. I think it originates in your posting of the witches police reports.
How about using some other method of posting those things
signed
very frustrated

Anon 3:50, have to agree. Bernie you have so much tircia shit on your site it takes forever to load. We get it, the bitch dumped you, she is no good. But enough is enough. You know as well as anyone she couod never beat Bob Freeman even if she ran. She is crazy, we get it. You are making yourself look crazy.

Please, enough with the tricia crap. Forget her, move on. Lets get on to more important things.

agree wholeheartedly that LVR site slows down computer but I don't know why!

If and when Angle would run for office again. Whoever his opponent is should grab that picture of him. First impressions are important. If I were looking at Ron for the first time that photo alone would make me have reservations about voting for him. A very valuable photo for an opponent to run with the caption

"would you by a used car from this man"?

The police reports do run from scrbd, and do slow down the computer. After today, I will remove all but the links.

Miller - did you hear today? No tax increase.