A'town Taser Assault: Was Minor Illegally On the Road? 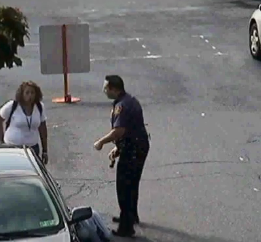 You and a quarter-million other people have by now seen the video of Allentown police officer Jason Ammary using his taser against an unarmed 14 year old grl on September 29, even though she had her arms up in surrender. She had it coming, some of you say. After all, she was committing a horrendous crime - walking in the street.

But I now wonder whether she and her two female companions were really in violation of a City ordinance banning pedestrians on the street. It looks like the road is actually closed, precisely so that students can walk there when school lets out.

If you look at the taser assault scene, where Ammary is intimidating one of this girl's companions, you'll see the rear of a movable sign in the roadway. It's the kind of sign that might be placed there if traffic is temporarily blocked when school lets out. I wonder what's on the other side of the this sign.

Holy shit! Then this girl may very well have been within her rights!

YES, IT IS A DO NOT ENTER SIGN... MY QUESTION IS DID THE POLICE ACTUALLY KNOW THAT?

It is a "Do Not Enter" sign becuase the flow of traffic is restricted to one way (westbound) on that section of E. Washington St. during school hours to control the flow of traffic. This is common on streets adjacent to many ASD schools.

The street is not closed. Several crosswalks are marked for students to cross safely.

Many Vo-tech buses drop-off and pick up on this street too. Standing in the street is a hazard here for sure.

Bernie I have been saying that since the first time you put the video up. The street looked awful closed to me, not to mention NO CARS were driving through.

By the way, I told you this would be viral. When you had less than 150 hits!

P.S. --- Mike D'Amore , Allentown City Councilman and future District Justice lives just cross the street on Irving Street from the Incident ... And yes that sign is a Do Not Enter Sign for the general public ... At Jerome Street there is a sign that stops all traffic for private vehicles except Buses for presscribed hours before school and after school ... At D'Amore's house there is a cross walk which has a crossing guard for Elementaty kids

Colin, you did. I thought 150-500 hits would be very good, but never expected a quarter million. You were also right about that roadway being at least restricted to some kinds of traffic. Next time I want to know the future, I will seek you out.

To answer your question, yes she was illegally on the road. Then she illegllly assulted a police officer.

You have not answered my question.

she was found not guilty of all assault charges and riot charges against her in a court of law...

Bernie, Going out on a limb here, but i predict some nitwit is going to have a smart remark about this...

Pawlowski wanted to put Allentown on the map. Now half a million plus have seen this video. Take that half million, add at least two friends to each click, and now 1.5 million and counting.

The other side of sign say do no enter. Those roads are blocked for kids to leave school I went to dieruff n cars are not aloud on that road until way after school hours. I also read the citys lawyers comment. He says do not believe the video that there cameras that they spent millions of dollars on puttting them up. I dont know about use but I was always told to believe wat I see not wat I hear!!!!

The police cameras installed at Dieruff High School and Irving Street Park were requested by neighbors of the East Allentown-Rittersville Neighborhood surrounding the park ... The cameras are located at the corner of N. Irving Street and E.Washington, N. Jerome and E. Washington Street, at the Park's Tennis Court and the Park's Basketball Court... And activity at the Swimming Pool may be monitored by a Camera looking out from the school