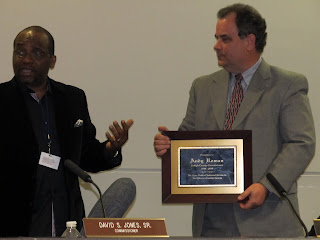 Instead of running for a third term as a Lehigh County Commissioner, Andy Roman instead opposed popular Sheriff Ron Rossi and ran into a brick wall. Roman will now rejoin the vox populi, where he has always excelled as an orator.

I've disagreed with Andy more than I've agreed. We've butted heads here and on at least one other blog. But I like that about him. He is open, accountable and always willing to listen.

In his 8 years as a Lehigh County Commissioner, Andy Roman claims he helped bring "systemic reform" to County government. In his final address, he was happy with these accomplishments: (1) consolidation of four row offices under a Clerk of Judicial Records; (2) privatizing the Nature Preserve into what is now known as the Lehigh Valley Zoological Society; (3) a major courthouse expansion that "saved us a considerable amount of money;" (4) Coca Cola Park; and (5) luring Olympus into the area.

Dave Jones, pictured with Roman above, joke about stealing Andy's plaque. They are political opposites, but are still good friends.
Posted by Bernie O'Hare at 12/23/2011 12:47:00 AM

Instead of running for a third term as a Lehigh County Commissioner, Andy Roman instead opposed popular Sheriff Ron Rossi and ran into a brick wall.

Why do say things you know nothing about? Are you a fool or do you just like to make things up?