Bethlehem Township Lets The Dogs Out 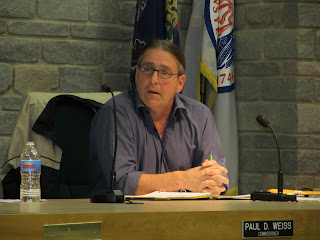 Bethlehem Township Commissioners budgeted $5,000 for the removal of stray cats and dogs this year. By the end of November, they had already spent $10,250. And under a new contract with the Center for Animal Health and Welfare, unanimously approved at their December 5 meeting, they could be spending as much as $25,000 next year.

Under this new agreement, the Township will pay the Center $100 for each stray dog or cat removed. Pit Bulls will cost $150 for the first ten dogs removed.

Although he ultimately voted to approve the contract, Commissioner Michael Hudak is concerned about the cost. "There's gotta' be something out there," he said. "I see this escalating, spiraling way out of control." He complained that "anybody" could bring an animal to the Center at Township expense. He predicted that people moving out of the area could bring their dog or cat to the Center and say, "Look. I found this stray pet."

Hudak suggested that the Township could start using some of its own kennels, but Township Manager Howard Kutzler insisted that in his eleven years at the Township, there have been insufficient resources to exercise that option. He indicated a state dog warden could remove dogs at no cost to the Township, but does not remove cats. He added that the Center has been "working well for us."

In other business, Hudak suggested that it's time to "get something going out at Housenick," noting there were several immediate action items in the master plan for the park adopted by Commissioners.

Commissioner Jerry Batcha noted the recent repaving along Chester Street and Santee Road, and asked whether the roads would be re-lined before Winter sets in. Manager Kutzler stated that re-lining is planned, but is uncertain whether the job can be finished before Winter.

Commissioners also approved a "procurement card program," under which police officers and other Township employees will be able to use a card to make purchases for designated small amounts, in limited categories, for predetermined periods. Manager Kutzler explained the need, stating that Township officers travelling out of state to extradite defendants must pay for hotel rooms and meals out of their own pockets.

Batcha worried that the program "could be abused," but was assured by Kutzler and the Township's finance maven, Andrew Freda, that guidelines will be prepared and presented to Commissioners before the plan is implemented.