Allentown To Soon Remove the Middleman - the Voter 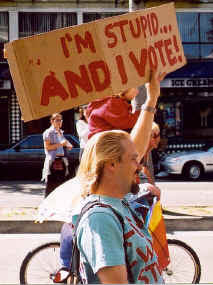 With yesterday's Pravda reference, you might think I consider Allentown a new Soviet satellite. That's untrue. Allentown is actually a monarchy under the smiling leadership of its Mayor for Life, King Edwin. His consort, Lady MacBeth, likes to be called the First Lady, although she's actually the 215th lady since Allentown is only  the 215th largest City in the country, according to the latest census.

Wait a tic, you say! People vote for King Edwin, damn it, so knock it off.

Actually, they don't. In the most recent election, Democratic turnout in Queen City was an abysmal 12%, according to figures in the Lehigh County elections office. Republicans did a little better, at 20%, but that's meaningless because there's so damn few of them.

On election day, the King just sends his court jester, Mike Fleck, to march up and down the streets with a small army of door knockers pulled out of homeless shelters. That's how someone like soon-to-be 89 Frank Concannon can get elected without campaigning or spending a nickel. Blogger Michael Molovinsky observes that Allentown is either completely free of ageism, or is a one-party town.

Obviously, it's the latter.

What this, of course, means is that Allentown's seven-member City Council will soon be comprised of three appointees. If Concannon has to step down for any reason, a majority of the board will be appointed.

Not that it matters. Although they will each privately state they detest King Edwin, not one of them, except for Jeanette Eichenwald, has ever stood up to him.

Is Pete gonna pretend he's Latino? Why don't you do a survey of how many calls he's returned from locals.

It doesn't matter. He's a Democrat, and if he wins in the primary, he wins.

I think Bar the 1st VP of the L.V Dems will nominate Jose Melina. She understands the needs to be represented in the community she's also Hispanic, (not that it matters). I don't think there is a primary in this case it's the executive board that makes the decision in this case

Then too, It is interesting that Allentown's new proposed legislative district includes all the major projects that the City wants to promote --- The Arena and the Water Front --- And the past project Overlook Terrace ..

The rest of the East Side settles into its new 132nd district like an attachment ... An after thought ... But if we can personify that area as an Orphan Annie or Cinderella ... Maybe something good could happen from that area.

Bernie do you know of any qualified individual residing east of the Lehigh River who might serve with honor the 132nd.