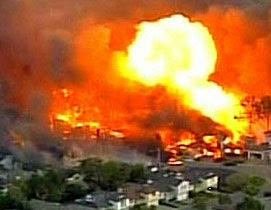 Last February, five people in Allentown lost their lives in a tragic natural gas explosion. For five hours, natural gas fueled the flames, as City and UGI officials scrambled to find a shutoff valve. Had the explosion occurred just half a block away, it would have been a school.

I'm normally critical of King Edwin, but liked the way he handled that emergency. A month later, during a Business Matters broadcast, he made the following points:

♦ There is more regulation of our water lines than there is for a highly flammable substance being transported by aging, cast-iron pipes.

♦ Most of the cast-iron pipes in Allentown are ancient, some of them going back to the early 1900's.

♦ Allentown is no different in this regard than Bethlehem, Easton, or the many older boroughs in the Lehigh Valley.

♦ In the year before this explosion, Allentown responded to over 100 gas leaks.

♦ UGI's current schedule of replacement is phased over forty years, and the Lehigh Valley is the last area scheduled.

Legislation to enhance the safety of the nation’s 2.3 million miles of pipeline infrastructure passed the U.S. House of Representatives today with the support of U.S. Rep. Charlie Dent (PA-15). In fact, in a rare display of bi-partisanship, the pipeline safety bill passed by voice vote.

It's called H.R. 2845, or the Pipeline Safety, Regulatory Certainty and Job Creation Act. It follows investigations into recent pipeline incidents across the country. In addition to the Allentown tragedy, there was an explosion in San Bruno, California, over 15 months ago, in which 8 people were killed, dozens injured and 38 homes destroyed.

“This important legislation will help modernize our region’s aging pipeline infrastructure and enhance the safe delivery of vital energy resources to consumers and industries across the country,” said Rep. Dent. “Safety advocates, federal regulators, industry representatives and members of Congress from both parties worked extremely hard to develop this strong legislation, which puts the safety of the American people first. I am confident this bill will help reduce the number of tragic incidents like the deadly explosion in Allentown earlier this year.”
Posted by Bernie O'Hare at 12/13/2011 12:01:00 AM

But no God damn new taxes to pay for this. God damn it.

Bernie-
This is important but what's happening with that Allentown officer's case? You were going to update us today.

Anon 1208am, you're right, this should never ever be paid for with tax dollars.

UGI is a for-profit company and has screwed it up royally by not planning and investing in their infrastructure. In the meantime, their shareholders have been getting dividends for decades and their customers have been paying less for gas then they should have been.

If UGI needs a loan from the US Treasury to get it done more quickly, then by all means make the loan.

But UGI's customers should foot this bill, not the taxpayer.

I agree this is important. But ... just to clarify, am I correct in my observation that Rep. Dent has been speaking out for quite some time about the "negative effects of regulations on job creators?" I am curious how this piece of legislation fits into his narrative, as well as your take on this matter, as you are a vocal supporter of Mr. Dent.

More to the point, how can this not be seen as hypocritical? Regardless of how important this may be to the people of his district, short of admitting his anti-regulation stance, Dent is clearly supporting new regulations on industry while propagandizing against new regulations.

I look forward to your response.

Publius, First, I have a different view on the importance of regulation than Congressman Dent, and have publicly expressed that view as recently as last week. Second, Congressman Dent has never stated he is opposed to all regulation, but just wants more Congressional oversight of rule-making authority. There is absolutely nothing inconsistent or remotely hypocritical between that and exercising that oversight with respect to gas pipelines.

I don't think your point is a very good one. It strikes me as sophism from a partisan, which is one of the reasons this nation is in such trouble.

Let's face it. You may not like Dent. You might think he is anti-regulation for the most pat, which he is. But let's recognize a good deed for what it is instead of trying to politicize everything.

"This is important but what's happening with that Allentown officer's case? You were going to update us today."

Actually, this killed 5 people in Allentown and I think it's a little more important. When I get the video of the Allentown officer, which is in the works, I will update.

Let's be clear here, unlike you who clearly states your bias for Rep. Dent, I am not a partisan. I'm a registered independent who has voted for both Dems. and Reps. I pay attention to the candidates and what they say. After they are elected, I pay attention to their voting and if it represents what I believe is good for the people he/she represents.

I am for is basically what you are for, which is a government that works. I would like to see a conversation based on facts and figures ... math and science. Unlike you, I do not believe that Rep. Dent's actions (read: rhetoric and votes) help move things in the right direction. Nor do I believe they generally represent the needs or desires of the people he is elected to represent.

Also like you I believe that the partisan bickering is a big part of the problem. Unlike you, I see Dent saying he is anti regulation and then proposing new regs. as playing partisan politics in his rhetoric and reality when he should or it is practical.

I was at the recent Chamber event where he railed against federal regulations and how they were the cause of poor job growth. As usual, he gave no evidence to support his claims ... mainly because there is no evidence this talking point is factually correct. This is exactly the kind of partisan bickering that we both agree is wrong with the system today.

I agree this is a good and probably necessary piece of legislation. Unlike you, I just cannot ignore the fact that Rep. Dent speaks so against new regulations and then votes for new regulations, no matter how good the regs. may be. Maybe Dent should speak in less definitive terms when he speaks in public.

Publius, Not a partisan? I can't recall a single instance on which you've sided with Dent on anything. You even use this bipartisan piece of legislation to criticize him. Come on. I was born at night, but not last night.

I am sure he is a nice guy, but that really doesn't matter. Just because someone is a good guy or whatever, doesn't mean we should overlook his overall voting record. This vote does not negate, to name just a few, the following:

Dent voted for the Ryan Budget that turns Medicare into a voucher program.

Dent, cow-towing to the gun lobby, voted to allow gun permits to be valid across state lines.

Dent voted in favor of the cut cap and balance act of 2011.

Dent voted in favor of inclusion of Social Security benefits in adjusted gross income calculations (which would have the effect of raising taxes on senior citizens of modest means and income levels).

Again, good for Rep. Dent for making a good vote in this specific case. I can give credit where credit is due. But to place this one vote in a vacuum and overlook his complete voting record, as you appear to be doing, is partisan ... unless you happen to believe in the votes he cast as your representative.