Even Pravda Would Have Asked More Questions 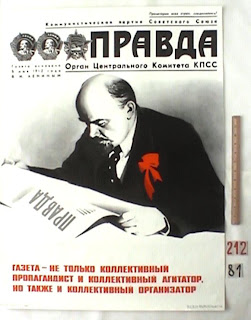 Talk about state-controlled media. Even Pravda or Izvestia would have shown a little more healthy skepticism than the breathless swooning displayed by Matt Assad and Scott Kraus in their "Arena could change face of Allentown" bombshell. It's essentially a Pawlowski administration press release on the 15 year master plan. Bethlehem Planning Commissioner Steve Thode is the only voice of some reason in the story. Buried deep in coverage, Thode likens the project - which will simply steal existing jobs in Bethlehem and Easton - to "rearranging deck chairs on the Titanic."

I wonder if Mike Moore did the editing.

I thought I was reading something in the Eastern Pennsylvania Business Journal.

Blogger Michael Molovinsky, in his inimitable succinct style, likens Kraus and Assad to "baby birds who ate regurgitated worms from mother Pawlowski." Much as I admire these guys, I have to wonder what happens to them when they cover Allentown.

Better than the story are the current Morning Call comments, posted by sycophants and toadies. There's the Allentown BrewWorks Mike Fegley - he's real objective.  DowntownArenaAttendee - he or she is on someone's payroll. I thought Montikea had the best comment - "I'm not holding my breath...." Of course DowntownArenaAttendee responded - "I wish you would."

We don't have to hold our breath, Allentown is being suffocated by the stench emanating from City Hall.

Noon Update: In fairness to The Morning Call, I should point out that the day before its Sunday bombshell, Scott Kraus broke the story that there would be no public bidding on the arena. So it's not all roses and butterflies.
Posted by Bernie O'Hare at 12/12/2011 12:02:00 AM

I know Matt and Scot.

Maybe these two experienced reporters actually get the Mayor's vision.

not a reporter but just a mouthpiece

I posted this on Mike's blog regarding these articles.

There was some important information, perhaps inadvertently, brought to light with this article. 650 new housing units, mostly apartments will be part of the final stage. This should send shivers up the spine of anyone who owns real estate in the city. 650 new dwelling units easily convert to at least 1000 new students. That equals at least a new school and additional teachers and staff to educate the increased enrollment. Guess who pays for that?
By the way, is there a worse paper than the Morning Call?

Steve Thode says *IF* it doesn't bring in new employers, it could end up stealing jobs from other cities. Nobody knows what's going to happen, but you're assuming no new jobs/employers are going to be created in the next few decades. That's pretty bleak.

I also see Scott Armstrong up there worrying that Pawloski's plan is going to work too well, as he's complaining about the growth before its even happened.

Steve Thode did say "if" no new jobs are created. Interestingly, however, is the "job shifting / stealing" has already begun, since the first big employer to move into the NIZ moved there from Upper Saucon Township - Lehigh Gas.

I am deleting comments that try to somehow blame this all on Stoffa. They are nonsense, and i prefer more intelligent discussion.

6:17, I hate comments that add "Just sayin'" at the end. I know Matt and Scott (It's Scott, not Scot), too. They are very good reporters, and I have said so here several times in the past. So either I am wrong in my assessment of this piece, or the two of them did what the MC always seems to do when it covers downtown Allentown.

I read in the MC that all the work is going to be "no-bid" contracts. How is this possible?

I am not going to allow you to hijack this post to blast Stoffa. Try it somewhere else.

This all better be done by union labor. Not one dime to non-union labor. Everyone knows Allentown is rolling in it. We supported Ed and expect to be paid now.