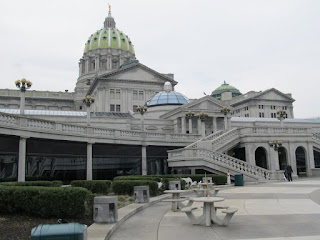 Where will the state's 18 U.S. Congressional Districts be located in Pa. next year? Your guess is as good as mine. You can forget about promises of transparency. Forget about promises to see the text of bills online before there a vote. Although State Government Committee members like Steve Samuelson are expected to vote on Congressional reapportionment on Wednesday, he has no idea where these districts will be located, to say nothing of the public.

The Congressional reapportionment plan is in House Bill 5. For every single one of the 18 U.S Congressional Districts, the Bill says only this: "The [take your pick] District is composed of a portion of this Commonwealth."

Gee, I thought they learned their lesson after the midnight payraises in 2005, when members voted themselves a salary hike in the wee hours of the morning with bills nobody had the time to read.

Now, House Republicans are keeping their Congressional plan under wraps. As of yesterday afternoon, no details were available. It's hard for me to believe the House leadership is serious about open and accountable government when this is the way they do business.

Voters should decide who their Congressperson is, not a twisted gerrymandered District. I find it very offensive they would consider spinning off Easton from the LV. If any incumbent cannot win on his or her merits, then it is time for that person to leave office.

Voters should meet secretly to plan cutting the size of this body in half.

Since when do voters get to decide anything when it comes to Gerryrigging of districts..Let me answer that question..Never.. Despite the fact that Democrats have about 1 million more registered voters in the state than Republicans, the Republicans control every branch of Government.. That is no accident..Even when the Dems had landslides nationwide, the Republicans held onto the Pa. Senate and most times the House..They have become masters at redistricting and therefore rarely anyone has a real say as to what their districts will look like..The republicans took control of the process this year and have left everyone out in the cold...Outside of a revolution , however, nothing can be done about it.. There is little in state law to prevent this and to my knowledge their are very few options for the voters to do anything about it..Unlike in other states where voters through referendum have challenged the process and formed independent boards to redistrict we, in pa. have no such option..In fact, since the republicans have complete control of this process they will never give up that power. Sadly enough, they also get to gerrymander the heck out of congressional districts..This means most of the Pa.Congressional districts will lean heavily Republican. It's a pathetic system, and the courts have rarely intervened to correct this legislative coup...So, to sum it up, we're screwed..Cry, and rant, and scream all you want, their isn't a damn thing that will be done to change Pennsylvania's system anytime soon.

Anon, or it might be that the national Democratic platform (as represented by people like Jon Geeting) are so radical left that they do not represent the beliefs and interest of PA voters?

Seems to be a core Dem belief lately - the message can't be wrong, so it must be some procedural thing that keeps them from winning.

Sorry, your message sucks and people know it.

What do you mean no transparency or bills posted on-line for public perusal?

Nice to see the R's defending gov't behind closed doors. Shameful. It's what we can expect from a Gingrich or Romney white house, along with presidential commissions to hunt down LGBT sympathizers.

"outside of a revolution"

Have some patience, Anon 8:43, the Occupy Everywhere Flea Party is working on it.

can you post a link and verify this charge?

better play it safe and RE-ELECT OBAMA in 2012!

Anon 1038, Obamacare was behind closed doors. And Eric Holder's Fast/Furious plan to arm Mexican criminals and kill American citizens and agents. And Solyndra, where the only two people who wanted that deal done were Obama and Biden. And Obama's plan to replace legislation with regulation (EPA, DOE, NLRB, etc.) - after all, if you can't win votes, then might as well screw the voters who didn't support you, all in the name of "Geeting Reelected."

It doses not matter to me whether it is Obama or the state House GOP. Government behind closed doors undermines public confidence.

It is unquestionably the state GOP in this regard..All these Fox news hounds that spout crap about Obama have no clue as usual, as to what they are talking about..They prove the accuracy daily of the polls that came out showing Fox noise viewers as the least informed..

Tom, Steve Samuelson, a Democrat, sits on the Committee expected to vote on Wednesday. How can he be expected to cast a vote without knowing what is in the bill?

I do not like government behind closed doors, no matter which party or which level.

I have talked to Steve about this issue..he said they'd been working on a plan and at the last minute the republicans brought in their own plan and basically said that this was the plan they were going with..You are right..No matter who is doing it, it is wrong..however, in this case it is the Pa. GOP.

Both sides need to get out of their bunkers. PA Rs are doing what the Obama administration has perfected. Last week's Joe Biden transparency czar meeting was closed to reporters.

Both sides flaunt their secrecy. Their defenders flaunt their idiocy. It's wrong no matter who does it. This blog has rightly skewered both.

You are so incredibly hilarious..The Obama administration has perfected this???? Were do you people come up with this zany nonsense..Redistricting is done by Statehouses. Always has been..If Obama had anything to do with Redistricting I would guess there certainly wouldn't be a Congress ruled by Republicans right now...Stop watching Fox's GOP tv and do some reading..Geez..

can you post a link and verify this charge?"

My bad: Gingrich didn't sign it. It was Bachmann, Romney and Santorum. My apologies to Gingrich, one of the original authors of the Defense of Marriage Act while having extra-marital affairs.

And I'm sure the commission will hold its liberty-depriving meetings in private where it can most effectively undermine civil liberties and further discriminate against the evil gays. Why not? It's how we got the tax breaks for oil companies and the no-bid contracts for the Iraq war.

Tom Foolery is aptly named and more foolish than Vice Malaprop Biden, who's transparency in government meeting was indeed closed to reporters. The issue is secrecy. Nobody said Obama was involved in state redistricting secrecy. He's involved in much larger secret schemes at the federal level (health care, gun running, wasted stimulus money).

Tom just wants to slam the side MSNBC tells him to oppose. He doesn't want to admit that both sides are equally grimy in the secrecy department. Those who keep secrets rely on sheep like these.

DENT will keep ALL of Lehigh County, and move westward into half of Berks, taking much of what Gerlach had there. Look for Fitzpatrick to get parts of Easton and other precincts heading up along the Delaware.
Shrinking from 19 to 18 Congressional seats means 12 million people divided by 18. Say goodbye to the late John Murtha's district. Critz is the most expendable DEmocrat in a State with a R controlled legislature. We may not know the exact way, shape or form, but that's what is going to happen.
The R's will consolidate their seats. Get over it.

Chris, you present good information, but forget one fundamental point: it is wrong to abuse power and to do so behind closed doors. Unfortunately, it is common place for PA.