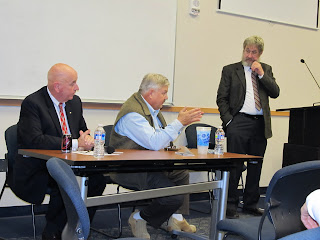 Council members Ron Angle, Mike Dowd and Ann McHale have a combined 37 years of experience. They'll all soon be gone. This is going to cripple Council over the next several years, as new members learn from their veteran mistakes, without veterans to guide them. It will also put immense pressure on Frank Flisser, Council's Clerk.

Council Prez. John Cusick is a full-time school teacher and has no time for the many occasions in which Council presidents are expected to be present during the day, for meetings with other officials and on intergovernmental committees.  Lamont McClure, an asbestos lawyer, is distinguished only by his poor attendance at Council meetings.

Bruce Gilbert, Barb Thierry and Tom Dietrich have only 2 years of experience. Gilbert has been increasingly disengaged since being rejected as Fiscal Affairs Director. Dietrich, like an empty can, talks incessantly, saying nothing. He then complains to newspapers for not quoting him. Barb Thierry, a decent woman, seems so disgusted by the dirty world of politics that I wonder whether she'll seek a second term.

Peg Ferraro, the only Council member left with any experience, is unwilling to make the tough decisions needed by a leader, and stained her reputation among Northampton County Republicans when she stabbed Ron Angle in the back over the Council presidency, just so she could get ahead.

The new crowd will be congenial enough ... at least on the surface. In the name of civility, we will soon return to 20-minute meetings. But nothing will get done, as Democrats lay the groundwork for the return of Reibman-style government.

They are three poster pol's for the "negative" impact of "experience".

A blowhard, a jelly fish and an airhead.

Somehow the county will survive.

the people have spoken bo. u just don't like it. TS

No. I believe in democracy, but think the people can be pretty damn foolish at times. The County is about to go to hell in a handbag, and the people will blame whoever is in office when the fault really lies with them for not doing their homework. I would not change the system, but we get the government we deserve.

You panic for no good reason..Angle was constructive when he wanted to be, but very destructive at times..Peg didnt support Ron because he simply couldnt behave himself and that bad behavior negatively reflected on council as a whole. Stoffa is still executive and will still have the power to steer government in whatever direction he wishes to do so..It might not be easy, however, since he was foolish enough to endorse Parson's opponent but I'm sure Scott, being the gentleman that he is, will forgive him..So as far as a groundwork of a Reibman style government goes, I guess that's up to Stoffa..The Reibman Government also left John with a significant budget surplus also, if you remember..

37 years and they're leaving quite a mess. They stayed way too long.

let's see Dowd loses the election and retires from the Chamber and has his daughter replace him at the chamber. WOW. C'mon Greater Lehigh Valley Chamber of Commerce exlain that to me a dues paying member. He's been moved around so much no one knows where he was and now you get him to retire by promising the position to his daughter. I am sure his daughter is qualified and a very nice person but come on!

I don't think either of these officials will be missed. Frankly I have always commended Ron's performance and ideas what I challenge were the lack of people skills to garner support for those ideas on council. Ron, you do need to get along to be a leader.

The people disagreed with O'Hare Angle and Stoff,a the people are therefore stupid and uninformed. That is why Ron Angle and John Stoffa have made such a mess of things.

I must admit, I too wonder how government will function without Ron angle to pull the strings of his puppet John Stoffa. Of course Atiyeh seems to be pulling Stoffa's strings just fine, for Atiyeh.

Wait, so this blog is FOR career politicians?

Only in your world is civility a bad concept.

There can be a violent disgreement of ideas and a clash of purpose and goals but it doesnt have to take the past form of petty, vicious, vindictive personal attacks which became the hallmark of the defeated one. His assault on the Reichstag is over. The building stands in spite of his incendiary effort to destroy the institution.

Really!!!! Good Riddance to bad garbage. None of these people are needed for competent county government. The county survived for decades before these clowns and it will survive for decades after they leave. Maybe even better.

Get over it Bernie. You are sounding more desperate than usual.

"Barb Thierry is so disgusted that she probably won't run."

ARE YOU KIDDING ME! Without Ron, the only decision she can make is that she can't do the job without Ron telling her what to do, so she won't run. Truth Bernie Truth!

Get Ron a court jester hat and let him sit at the base of the dias.
Like Quasimodo.

tm has a great picture of Angle in a clown suit on West Easton blog. it is hilarious.

Will Ron sit in the gallery next to the Gracedale Goons? We will see him at council meetings like before when he was thinking of running? Will he fins a strange way to work with the gracedale goons and take their side? Is this going to be a twilight zone special?

He tried to kiss up to the Gracedale folks before the election. Behind the scenes he tried everything. They knew what they were dealing with and wisely said no thanks.

He has O'Hare and Stoffa still calling "his" shots. he will sit at home until he runs for County Executive.

no loss here! the county will run fine with out these goons! ( your word)... then comes 2012 elections! lets see who else we can get out of office!!! nana nana nana nana na hey hey good bye!