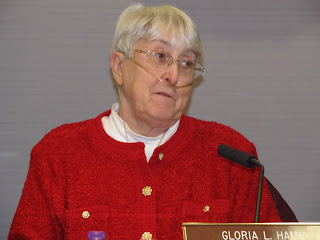 A R.N. by training and education, Gloria Hamm served in her last meeting as Lehigh County Commissioner on Wednesday night. She was defeated in a Republican sweep of Comissioner seats in November. Instead of speaking about herself, she made a plea for human services. "I just hope that the next person in charge of Human Services is as passionate and concerned about the topics in Human Service, and makes an effort to see that that part of the population - which is currently underserved - will at least be keeping their heads above water."
Posted by Bernie O'Hare at 12/23/2011 12:01:00 AM

Since she is the Chair of Human Services on the Commissioners, I would say the statement was extremely self-serving. Oh my god, can anyone care as much as me. Can anyone love as much as me. No, I am afraid no one will be as good at it as me!!

Typical liberal claptrap. It existed before she was elected and will go on long after she is gone.

I think we should make light of her oxygen tubes too!!!!!
HAHA HAHA
That always gets a chuckle in here.

I see one comment before yours, and no derisive mention is made of Gloria's oxygen tubes.

I disagree with some of the stuff human services does. Her statement was self serving. But one cannot doubt her dedication. Thank you for your service, Gloria.

Anon 12:51 Just prey that you never have a serious illness - but then you already do. It's call permanent dumb-ass.