Is It Safe For a Woman to Walk or Run a Trail Alone? 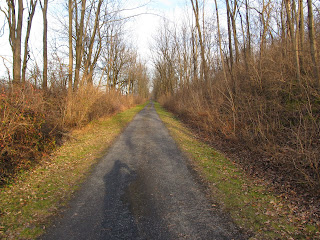 A woman was sexually assaulted Saturday afternoon along the Lehigh Canal towpath. She was alone. It's hard enough to work up the motivation to get out on a trail or bike path, but it seems that women need to consider this unpleasant possibility as well. It certainly would be safer to avoid running or walking on trails alone, but staying off of them completely just lets the bad guy win.

Yesterday afternoon, along the lonely but inviting Nor-Bath trail, at least half of the people I saw were solo women who seemed as happy as I was to be out there. Here are some pointers from a Runners World forum.

* My husband always knows what route I will take and how long I will be gone.

* My husband is the only one who knows what route I will take.

* If I have a big enough pocket, I carry my cell phone with the GPS turned on. This allows my location to be easily tracked if the authorities have to be called.

* I have taken self-defense and carry pepper spray.

* I never run the same route two nights in a row or the same night of the week two weeks in a row.

* I like to run on the nearby college campus. It is well lit and has those emergency phones with the flashing lights.

* Running loops seems like a bad idea. You are more likely to be attacked by some neighbor who has a weird fascination with you than by a random stranger. The loops set up a pattern which makes it easier for a stalker.

Email ThisBlogThis!Share to TwitterShare to FacebookShare to Pinterest
Labels: fitness

PA is an open carry state. quite a visual deterrant

Agree with anon 621. The 2nd Amendment can be exercised quite easily in PA.

Common sense also has tp o prevail. Trails like the desolate one in Bethlehem Township are beautiful places to walk, run and bike but they are also far away from everyone and everything. So don't do it alone.

Anon's 6:21 and 6:29. These are great points, however, to get to your running destination in PA you need a permit to carry a concealed firearm (the driving from one place to the next is considered concealing) and have you ever tried to get any sort of rigorous workout in with a firearm attached to your hip??

I beleive if you leave the firearm on the car seat in open view it is not considered concealed.

Also a nice small pocket or ankle holster can hold a mini .25 or .22 caliber. While not overly powerful it will probably do the job if you train.

And then Bernie can do a story on how the guy snuck up behind the woman took her gun, raped her, and shot her with her own weapon.
Logical, lets increase the violent crime exponentially by providing the criminal access to a gun.

Then we have the manly response that to some seem acceptable. Whereas a child is being raped in a shower and the witness runs home to tell dad?
Un-f'n believable.

You got it anon 7:39 A gun would done absolutely nothing in this case! Self defense courses are what needs to be done. Give you the practical things to do when attacked from behind and tips to try to stop the attacker without jeapardizing your own life. GUNS are NOT the answer and it makes me sick to think that any women or for that matter any man is capable of carrying a weapon and using properly when needed.

It's sad that we even have to discuss this. One thing is for sure. A gun would make it much harder to attack someone from the front.

Whaah!! I hate guns. You chose to play the karate kid. Many chose to carry.