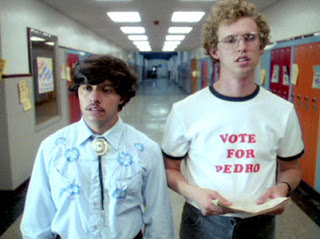 Although the Lehigh Valley will soon be split between two Congressman, Allentown is getting a new state house seat, District 22, one that reflects its growing Hispanic population. But ironically, its first representative in Harrisburg will be a Gringo.

Forming a group called Securing a Better Future for Allentown, Latino and African-American leaders have strongly hinted to Capitol Ideas' John Micek they'd like to see Hispanic candidates in the special election for the seat. But Micek does not pick the candidates. That's why we have party bosses.

Who will Republicans pick? Who cares? Just as Reichley's seat is a sure thing for Republicans, this one will go to the Dems.

So who will Democrats pick? Informed sources tell me it's none other Allentown City Council member Pete "El Gringo"  Schweyer, who works in Harrisburg as Jennifer Mann's Chef of Staff. His selection will virtually guarantee his victory in a special election.

This is weird. Republicans don't think Reichley's district is ready for a person of color. But it looks like Democrats think Hispanics are ready for a Gringo.
Posted by Bernie O'Hare at 12/29/2011 12:02:00 AM

Party bosses pick the candidates Bernie. That is the way in the Democratic Party. The Long Dem's do the same thing in Northampton County.

Lou Hershman lives in the district 22 doughnut hole area of the East Side ... He could be the Republican opponent as a seventy year ...

I have deleted a comment from someone who is not supposed to be commenting here.

It's not a rumor. Folks heard this a year ago. Pete's probably picked out his new business cards by now. Oh, does he even speak Spanish? Try reaching him on the phone. Good luck with that.

Who is the D party boss? Thanks.

Bernie
Rather than hint, why don't these strong and growing important political voices insist on a Spanish candidate? Isn't Allentown almost 80% Latino now?

The person heading the Candidate Committee for the D's I believe is Bar Johnston, and she's an Hispanic. Pete has worked in the community for years and will be a good voice for the entire community.

Is that Schweyer on the right

ete has worked in the community for years and will be a good voice for the entire community.

Schweyer won't be a good voice for Allentown. He's remained silent on crucial issues for years. Does he speak Spanish or not! Small detail but somewhat important in an 80% Spanish city.

"Rather than hint, why don't these strong and growing important political voices insist on a Spanish candidate? Isn't Allentown almost 80% Latino now"

Try around 50% Latino population in the City of Allentown. The Allentown School District is approximately 75% Latino. My guess is that there are more non-Latino voters in that new district than Latino voters. A non-Latino can easily win there, especially a savvy, seasoned and well connected politician like Schweyer.

Bernie, Ask Schweyer how he'll deal with this?
Courtesy: Drudge Report:
"Residents in a Lehigh County township are waging a battle against local farms that are using a fertilizer made from human feces.

Several Lynn Township, Pa. farmers use a bio-solid called “granulite” to fertilize their crops, according to township authorities. “Granulite” is sewage sludge turned into dried pellets, 30 percent of which is made of human waste.

Residents like Bill Schaffhouser fear the health effects when this chemically-treated sewage fertilizer seeps into the ground and water."

You mean in all of Allentown there is not one Spanish civic leader to represent his or her people in Harrisburg?

Bernie
Schweyer sat quiety for years serving Mann, but that doesn't make him a leader.

Peter works in Allentown for Rep. Mann. As he has run for city council 2x, I am sure he is well familiar with the district and that many of the voters know him as well.
Should he be elected he'll work hard for all of Allentown.

Anon 726 speaking Spanish has nothing to do with political process.. Sorry but some communities don't vote, Julio barely got re elected and other Hispanic candidates got very few votes (ie Mota) from the Hispanic community. How do you expect a population of non voters to gain representation if they don't vote. It's about the power at the ballot box,if you don't vote,you don't count.

This is interesting. DeWeese is on trial next month:
http://articles.mcall.com/2009-04-07/news/4347473_1_house-democratic-caucus-e-mail-special-election

"Schweyer sat quiety for years serving Mann, but that doesn't make him a leader."

Agreed. However, you don't have to be a leader, you have to get the most votes. Schweyer has asserted himself as a minor political machine in Allentown. He would win that seat easily, especially when his ally King Edwin endorses him.

In answer to the question oabout LC's Dem party boss, he is Rich Daugherty. I am told he will allow the committee people in that district make the call.

Must all groups be represented by someone from whatever group they belong to? Sounds racist. As long as we keep keeping score, we are not getting better.

I think everyone should take note that the party that promotes and litigates for racial quotas seems poised to ignore their own strictures so a politico can be rewarded for service to the machine.

Pete has not made too many comments on issues in the County because he works for a legislator and he can not make comment lest it be attributed to the legislator. That is the life of people who work in leg offices, they must be very careful about making commnent, or ever expressing an opinion for or about their employer or themselves. If you know any constituent service reps of either party you know that is very important to them.

He has got the gut going for him.

Can we get Emma back?

"Schweyer sat quiety for years serving Mann, but that doesn't make him a leader."

Agreed. However, you don't have to be a leader, you have to get the most votes. Schweyer has asserted himself as a minor political machine in Allentown. He would win that seat easily, especially when his ally King Edwin endorses him.

Yeah - will Jennifer Mann be his chief of staff?

Seems a classic party troll doing his time for the gipper.

Can he even relate to his constituents?

Don't count out a late entry by Bob Smith as a Republican from the East Side...

Harrisburg R's wrote off this district. Bob smith would have no support or chance at it.

Sorry to correct you ... Bob Smith will not be in the 22nd district...He resides in the 132nd district