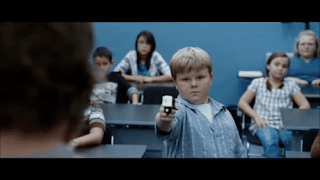 I know this will come as a great shock to most of you, but there are people out there who really hate my guts. In addition to all the hate posted in anonymous comments here, the people I cover are usually besieged with emails warning them about my evil ways.

I can't understand it. I'm such a nice guy.

I'll give you an example. Wicked Witch of West Easton Tricia Mezzacappa - no doubt encouraged by her curiously unnamed blog mentor - recently emailed both State Rep. Bob Freeman and Easton Mayor Sal Panto, to warn them both about my dark side. She's very upset because Mayor Sal Panto, in particular, often responds to my posts about him, and did so over the weekend.

In addition to these direct communications, anonymous comments like this pop up here and there. "The People, through email, phone calls and cancelled subrictions [sic] if necessary, need to let O'Hare's enablers on the media and politics that it is unacceptable to continue to support his vitriolic blog."

I particularly like this one. "You're either with The People or with O'Hare."

Of course, what really outrages these people is that I tell the truth. In Mezzacappa's case, I posted police reports from her numerous calls to them this year alone. I thought you should know that this borough council wannabe and political opportunist calls her neighbors "niggers," drug dealers and chop shop operators. She accuses West Easton Borough officials of theft, and me of burglary. Incidentally, I'm also a stalking "pig kicker." Despite numerous calls to police about everything else, she never reported me for assaulting porky. She meant to, but slipped in pig piss.

Well, Mezzacappa and her goofy allies better put their keyboards into overdrive. My Tuesday Youtube video, Allentown Police Tase 14 YO Dieruff High School Student in Her Groin, is now up to 507,303 views. It has resulted in a small spike in a few of my other videos. Some of the more popular ones are below.

Attack of the Gracedale Goon! - 552 views

I still can't get anyone to watch John Stoffa, even though I've suggested he deliver his speeches drunk and in leotards. Maybe I'll get Angle to tase him.

Dent better have you there he owes you big time.

Bernie
Glad you're not dropping this. Since you're a buddy of the police
why would any officer standing feet away from a teen dressed in summer clothing feel danger? Maybe you can explain why this officer acted as he did.

Maybe you can write something about Allentown's increasing violence. This weekends double murder only a block from the new arena is sickening. The mayor really thinks visitors are going to come to his city to attend sporting events?

You look better with your weight loss.

It's not really my tape, but a police surveillance tape. But I'm bragging a bit bc I uploaded it to Youtube and it went viral there.

6:48, It's increasingly obvious the officer reacted with excessie force. I frankly feel he was using excessive force when he had his arm in the girl's throat, but since I did not see what happened prior to that, I'm willing to give him the benefit of the doubt. Where he went wrong was when he backed up to use his taser. As soon as he did so, she raised her arms in surrender. Under the continuum of force theory that APD is talking about, that is when he needed to stop. Instead, he shot the girl, and in her private area.

I believe that the only time a police officer should be allowed to use a taser against a minor is when he would be justified using deadly force. I think Allentown needs to adopt a policy to make that clear. I'd also like to know if they are getting independent training or are relying on Taser to train them.

Another reason I'm bragging is bc it really pisses off the haters.

Footage of Barron or NorCo judges actually working would fetch more money than the Zapruder film.

The 0only tape of Barron is of him politicking. The guy is hardly ever in hos office and when he is he is on the phone trying to politic some-more. A real waste of taxpayer money.