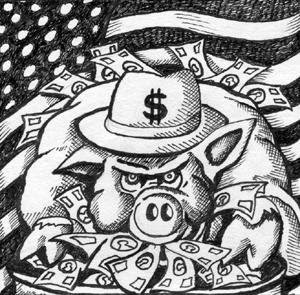 The Morning Call reports that Pennsylvania's revenue projections are off by 3.6% this year, in spite of a state budget that balances the books by reducing public education funding by $1.1 billion. The state has imposed "draconian" cuts in funding to Ben Franklin Technology Partners', located in Bethlehem, too. According to State Senator Pat Browne, dwindling state revenues make these cuts necessary. "We have been in a trough, a serious trough," he laments to a reporter. What the good Senator fails to point out, however, is that he dug the hole about which he now so sadly complains. He helped draft legislation that gives major tax breaks to well-heeled entrepreneurs, so that those on the brink, can continue to suffer.

All in the name of hockey.

Back in 2009, Browne and State Rep. Jennifer Mann, in a bi-partisan thumb of the nose to those of us who struggle making ends meet, slipped a little piece of language into a Fiscal Code update, which was supposed to clarifying the definitions of "little cigars" and "cigarettes." $28 million - that's a lot of cigarillos - is buried in an infrastructure line item for something brand new - the "Neighborhood Improvement Zone." To be fair, that program is available for any local government with a population between 106,000 and 107,000 in the 2000 census. It's certainly nobody's fault that the only local government fitting this bill just happens to be Allentown.

Aside from the outright grant, what's really repulsive about this is that taxes that should go to the state, to pay for things like schoolbooks and Medical Assistance, will instead be funding a J.B. Reilly development, helping him get richer.

Lehigh Gas has already abandoned Bethlehem to move into this brand new neighborhood zone, depriving the state of whatever tax money is generated by the 70 people it employs.

There go a few more schoolbooks.

How much state tax revenue will be lost every year? That's hard to say. It depends on how many businesses move in. Some say $10 million per year, but I suspect the final figure will be much higher. Helpful as ever, the state has set up a web page to make it easier for businesses in that district to help J.B. Reilly. Who knows how long this NIZ will last.

To be frank, the NIZ is NUTZ.

I'd like to tell you about Reilly's campaign contributions, but the state site seems to be inoperable since it was "improved."

Noon Update: While the NIZ does provide for dollars that could be used to offset new development costs in the zone, the rules for their use - as Michael Molovinsky has aptly pointed out - were only revealed after the "yellow peril" retailers were displaced. Besides, if you really read the rules and guidelines, the ACIDA - or perhaps the new "super" authority being created - can be quite arbitrary in their dispensing of NIZ dollars. ACIDA, for example, is the same authority that approved the lease with the Brooks Group for the Arena without even seeing it.
Posted by Bernie O'Hare at 12/01/2011 12:01:00 AM

To be frank, a hockey arena in center city is NUTZ.

We should be raising the taxes on the businesses in Allentown to help all the poor people there. Glad I live in the burbs.

Sen. BROWNES move to a office in the N.I.Z.. will the earned income tax that on Sen. Browne's State Salary now go to pay on Reily's mortgage or still be Allentowns. Does any one know. Since if goes for the mortgage, then Reily's gain and Allentowns loss.

What a surprise that an idea hatched by politicians should result in the predictable waste and corruption. Remember the only thing worse than the original problem is the government solution.

UPDATE: The displaced merchants, in a desperate attempt to survive, met twice with Sara Hailstone and once with Pat Browne. In all three meetings they were never informed that the NIZ taxes could be used by private entrepreneurs for debt service. Once again in Allentown, the rules were stated after the game began. The new Authority must now approve any application for private use of NIZ, as in Mr. Reilly's case. Had these merchants been able to apply the sales tax to the debt service of a new location, their options would have been greatly enhanced, and their misery reduced.

This has to be done right way!

Not to downplay your point, which is spot on, but if folks in communities without municipal police service paid their fair share for the increased burden they place on state police, then we'd see less budget shortfall.

My point: we subsidize all forms of living in PA. Nobody has the courage to reform state and local govt to be truly equal. Instead, we get ditties like this.

Bermoe
Keep writing about this. Please.
People do not realize what's going to happen downtown Allentown. Just wait till the buildings get torn down. No one possibly can guarantee there won't be another sink hole.
Many older residents will tell you exact details of that fateful day at Corporate Plaza.

Bernie
Do you know if that free website that lists all state salaries is now online?

Gunther had a scathing but some say accurate Browne commentary this week. Imagine Browne and Mann huddled together in some dark alley
figuring out how to get this deal done.

"Charlie Dent and the Republicans made the situation worse by failing to extend the aid to state and local governments in the stimulus. "

Who do you think supplies that aid.
Taxpayers buddie.

How much is Browne's rent in the former Merchants Bank building? Anyone?

Bernie
Heard Browne's new office is huge and swanky. Maybe you could stop by and give us a report. Shouldn't you be allowed to photograph it too as it's public property?

Yep, all tax revenue from downtown Allentown should continue to fund the needs of the townships.

After all, why should people in the townships pay property taxes to fund their roads and police service?

The real problem here is the state legislature's slashing of education subsidies placing the burden on local school boards to raise taxes. The state legislature needs to INCREASE revenue by raising taxes on everyone. I know, you don't like to hear it but it's time the state lackeys grew a spine and stopped passing the buck.

With regards to this zone, the handouts to businesses will bring wallets to the city. Not a bad thing in the long run.

Who do you think supplies that aid.
Taxpayers buddie.

No shit. That's how we generate revenue in this country to run the government services you partake in each and every day. You're welcome.

How much is Browne's rent in the former Merchants Bank building? Anyone?

I'm guessing you'd like the "taxpayers" (apparently those who hold that title are merely looking for tax cuts) to fund a HIGHER priced and higher taxed office space?

You tri-corner hat types slay me. Get on the Cain Train!

Ah, the boy genius from NYC has spoken.

Of course, as always he reads about 10% of what's written then decides he knows everything about it.

Missed the part about Lehigh Gas already moving and taking advantage of the tax breaks, but it was in the 6th paragraph and you never get that far into an article.

It must be tough Mr. Geeting, to bear the cross of an intellect so vastly superior to that of mere mortals. We're so fortunate that you're in NYC blogging away instead of doing something useful or productive.

Yes, no question I am dumb. You are dumber. Together we are dumb and dumber.

"Do you know if that free website that lists all state salaries is now online?"

I honestly don't know, but will find out.

It is good that local school boards need to raise taxes. Maybe, then, the ignorant will finally get it when the money comes directly out of their pockets instead of a credit card for "someone else" to worry about.

No, the real problems here are:

-A public school system with an expense structure that requires the state and federal grants of borrowed money.

-Swimming pools for $7 million (Gawd, in NASD they wouldn't be caught dead in a 5 million dollar pool, don't you know!).

-Hacks like Mann and Browne,(and don't forget the biggest whore Tom Ridge the Pension Multiplier) who fail to repeal union purchased laws that enable the education nazis to use children as hostages in extortion, er, uh, compensation and benefit negotiations.

-Golden parachutes for retiring school administrators who had absolutely zero leverage in negotiating such an incentive.

There is plenty of money for textbooks without raising taxes, all we have to do is stop wasting money.

On a lesser note, agreed that localities who choose to forego municipal law enforcement coverage should cover the cost of state police coverage. Should be a no brainer, so that's why it is not, I guess.

Carpetbagger or otherwise, degrees found at the bottom of a Cracker Jack box don't count as far as I am concerned.

Hey Bernie, Did you know that the only way that NIZ financing got out of the Republican controlled House was not due to Mann but as a direct result of Browne promising Republican House Leader Mike Turzai that he would change a position he has held for over 16 years opposing the privatization of the state liquor stores. This is a double sell out by Browne.

Bernie, Maybe you should ask Browne about what he promised Mike Turzai. That could be a juicy investigation that the local mainstream media won't dare touch.

And Clem, I know you will probably never be in the situation where you would need to hire an educated person but most of us feel educated citizens is a very, very important part of moving this country forward. I suppose you are in Newt's camp and would like to see all kids pushing a mop.