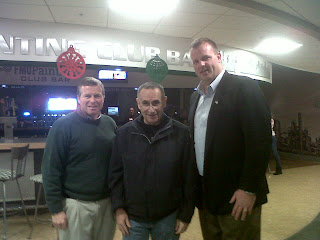 As you all know, I'm a miserable bottom-feeding blogger. So yesterday, when LV Congressman Charlie Dent hosted a Tailgate Party at Coca Cola Park for the Eagles Jets clash, I decided to crash it, hoping for some tidbits of political gossip.

Making it inside the stadium is no problem this time of the year. Nobody notices a grappling hook.

If caught, I would simply tell stadium officials I had an appointment with Ferrous, but nobody noticed me as I slowly made my way to the party.

At least that's what I thought. I had almost made it to the door, where the aroma of burgers beckoned, when I felt this sharp jolt in the ass. I was tased.

"Hey, I'm white and I'm not a little girl," I complained as I went down like a ton of bricks, thinking that Allentown Police Officer Jason Ammary had finally caught up with me. But it was no rogue cop. It was much worse.

I had fallen into the clutches of Evil Shawn Millan, who was lying in wait for Democrats

"Bernie, is that you? Shit man, I thought it was Lisa Boscola. Why didn't you tell me you were coming? I would have given you a ticket."

Millan escorted me to a locker room where some dude with a Sandusky name tag carefully pulled out the barbs and invited me to take a shower. Then I joined the party, rubbing my ass, looking for paydirt.

But nobody was talking politics. Not Tom Carroll. Not Tony Simao. Not Dean Browning They were actually watching the Eagles and getting pictures with former Eagles' great Jon Runyan. Like most good offensive linemen, he looks like an altar boy (a very big one), but is supposed to have been one of the dirtiest players on the field.

When Charlie saw me, he introduced me to 6'7" (he started in the NFL at 6'9") Runyan, who probably broke my hand when he shook it. Although Runyan technically was elected, he was actually drafted to Congress by both party leaders in their never-ending quest to defeat capitol police in that annual congressional football game.

As an Eagle, Runyan started in 190 consecutive regular season games until he took an inadvertent knee to the back of the head by fellow teammate and TE Brent Celek. That topic came up yesterday, when Celek hauled in five catches for a career-high 156 yards as well as a touchdown in Eagles' mauling of the Jets.

Like Dent, Runyan is both affable and down-to-earth, seemingly unaware of his intimidating presence. Fortunately, he's a gentle giant, at least off the field.

Though a Republican, he raises donkeys, and tells me they're much smarter than horses. I told him that, as a blogger, I've become something of an expert on jackasses myself, and we exchanged a few pointers.

In addition to Charlie and Runyan, an army of kids was running throughout the stadium, and chasing after them was none other than Pam Dent, Charlie's very pretty wife. I got to meet her, too.

Had a chance to spend some time w/ Runyan when I was part of the Flyers organization , he is a great guy.

Wow, Bernie. You're half the man you used to be. You're svelte!

Got that right, what's the weight loss up to?

"Had a chance to spend some time w/ Runyan when I was part of the Flyers organization ,"

Wow, I'll bet you have some great stories. I liked the guy. He may be from Michigan, but seemed very much like the people around here. Must be all those years with the Eagles.

Congratulations on the weight loss.

You look like Dorian Grey's portrait. Is that all the hate and bile showing itself?

Those donkey's he raises provide Runyan a handsome discount on his New Jersey property taxes ... pity we can't get a tax break for voting for jackass's like him ...

Can you crawl up Dent's ass any further?

It was great seeing you at Congressman Dent's event Bernie. I can't believe how different you look (in a good way) from when I first met you. Next thing you know you'll be beating everyone at 5Ks.

Wow Bernie you even look small next to Charlie! Great job on the weight loss

By "Eagles great", you mean a team leader who had no sense of urgency in the Superbowl---that they would lose?

Charlie complained about his size so Bernie lost weight.

"Congratulations on the weight loss."

"You look like Dorian Grey's portrait. Is that all the hate and bile showing itself?"

"It was great seeing you at Congressman Dent's event Bernie. I can't believe how different you look (in a good way) from when I first met you. Next thing you know you'll be beating everyone at 5Ks."

I just want to beat that bastard Joe owens, who cheated and beat me at a race earlier this year.

What is going on that Bernie is thin and Dent is fat? O'Hare looks good.

Dent is a Washington insider now eating fatcat meals with lobbyists and other miscreants. It's evident by his enormous waist size.

Forget the fat cat catered tailgating party. Is Dent still voting to give the middle class a tax increase?

I didn't know that Iraq war vets and exchange stdents from Afghanistan were "fat cats." Silly me.

So does that mean he is voting to extend the middle-class tax cuts? You can save the pr for the press.

I am writing about that separately, not here. You don't write this blog. I do.

Merci, Donna. Your comment went up three times, but I don't feel comfortable deleting a rare comment that says something nice.