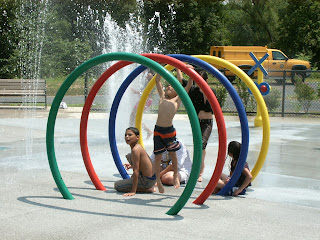 According to the American Planning Association, Bucky Boyle Park is a "crown jewel" among Allentown's parks "because it has been faithfully restored to serve former baseball legend [Bucky] Boyle's intended purpose: to reach underprivileged Allentown children through sports and make them good citizens." My grandson and his friends have gone there for pick-up baseball games, sometimes dragging me along. It's a neat place, but I wonder how long it will continue serving the kids.


"[Planner Keith Weaver] said Buck Boyle Park ... should be reconfigured, possibly featuring a small inlet with a wharf and access to pontoon or paddle boats.

"You don't have [recreation] fields as centerpiece of great waterfront," he said. That place could also be the perfect spot for a "gem of a community center."

In 2006, Nazareth's Big Kids considered moving their municipal offices into part of Nazareth Hall Park, which essentially consists of a library and baseball diamond. They wanted to add a parking lot and a weird retention pond that would ruin the park for baseball ganes among the Little Kids. Civil war ensued. The Little Kids won. One Council member resigned. Another was tossed at the polls. The Big Kids agreed to start following that pesky Sunshine Act, too.

Allentown seems to be on a different planet. First, minority merchants along Hamilton Street are shoved aside to make way for a hockey arena. After dealing with the "yellow peril," it looks like disadvantaged kids are being shoved aside, too, for one "gem of a community center."
Posted by Bernie O'Hare at 12/12/2011 12:01:00 AM