Northampton County Council bid adieu to three departing members with a combined thirty-seven years of experience at their December 8 meeting. Ann McHale, a Democrat who represents the Bethlehem District, is retiring after 13 years. Mike Dowd and Ron Angle, two Republicans representing Easton and the Slate Belt, respectively, were defeated in November's Election. Dowd and Angle had each served twelve years. 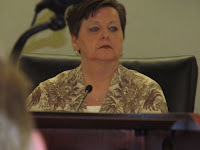 McHale told fellow Council members her biggest accomplishment was "saving millions of dollars" in the County's self-insured health care program. She added it was an "honor and a privilege" to serve as Council's first female president. But McHale said that what she will remember most are the friendships throughout the County's "great workforce." She wished her successor, Ken Kraft, good luck. 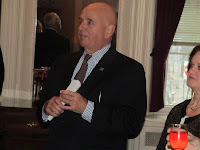 Dowd said his 12 years have been a "remarkable experience," and encouraged "anybody who is at all interested in government, to make the transition from sitting outside, to sitting inside." Dowd praised his successor, Bob Werner, as a "wonderful fellow. I'm really pleased to see him coming into office." Dowd is proudest of the work done in the last few months, in which a TIF was enacted for the Route 33 interchange. 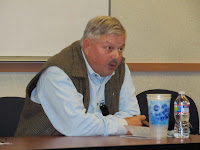 Angle claimed his greatest accomplishment was hanging a plaque containing the Ten Commandments inside Council chambers. "Sometimes it takes a son of a bitch like me to get issues out there," he said. "Too bad there's not more debate in places like Washington, and maybe they'd make some headway." Angle called his successor, Scott Parsons, a "genuinely nice guy who smiles 90% of the time. He may lose that smile once he gets here," he joked.
Posted by Bernie O'Hare at 12/09/2011 11:10:00 AM

The Ten Commandments?
I "guess" he "might" not have broken any of those, although the false witness thing is arguable.
How about the "Golden Rule"

The golden rule is not one of the ten. The golden rule has it's roots in even more ancient religons..Buddhism and Hinduism. It is also called the Golden Thread as that thought winds it's way thru every major religon of the world. The Queen is dead..

Thank you Ann for your service on County Council and thank you for the good wishes.

They'll never fumigate Reibman's spirit from the chamber without a Santeria sacrifice. Tastes like chicken.

Don't let the door hit you on the way out Angle!

You guys have a Reibman fixation. and that is why you can't win today. Sad teabaggers.

Goodbye and good riddance. These people were here way to long. Their usefulness expired as evidenced by their non re election. The voters have spoken.

There's no Reibman fixation. It's the lingering shit stain from his disastrous term, the one he served before taking up residence in the D's retirement hammock at the bridge commission. Flea baggers need to give up defending this crook and concentrate on begging for your next handout, cleaning the shit running down your legs, and attempting to put your herpes in remission. It's been fun watching each city exterminate the vermin like a De-Con commercial. They can go back to occupying Mom's basement.

Your fixation on Feces, Reibman and Mom sounds like you may need professional help.

The problem is do you need a psychiatrist or an exterminator. What happened, did Dad not hug you enough?

Oh ,the crazy teabaggers lost Angle, they need to vent. They do provide a chuckle or two.

You now lament the loss of McHale?
She left because she couldn't stand Ron Angles antics and attitude. I would wager if she knew the outcome of the elections she would have chose to remain on council.

I am reporting what she said, not what I think. McHale is a bitter, mean-spirited person who never quite got over her loss to Stoffa. I am glad to see her go.

I am glad to see all three of these mammals go. McHale made bad on her promise to make "government more proactive." She did NOTHING of the sort, but allow for the walls to continue to activate around her. The Most Right Reverend J. Michael Dowd wanted to create jobs. Hello?? Hello, Jesus, some jobs, please. And, The Most Righteous Ron Angle's constant battle over minutiae wasted valuable taxpayer time and effort from breathing and working on the grander scheme of things. These three define the statement, 'The problem with political arguments is a politician always wins.'

If Dowd ran to create jobs, why did he support firing 800 Gracedale employees?
Nevermind he is gone.

He didn't. He supported privatizing Gracedale so those 800 plus employees (for less than 800 residents) would no longer be a millstone around the neck of county taxpayers.

Now Dowd, Angle and soon Stoffa will no longer be a millstone around the neck of the taxpayers.
Amen