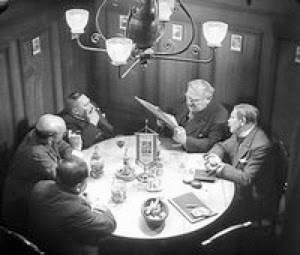 During County Council's December 8 meeting, Council members huddled in executive session to decide what to do in response to a November 23 Open Records Office Order  (2011-1406_OHare-Northampton_County.pdf) , requiring Council member Tom Dietrich to fork over a note, or its "reasonable facsimile."

Dietrich had scribbled that little missive during an October 6 Council meeting, while Ron Angle was in the middle of announcing that landfill magnate Charles Chrin would make a $2 million contribution to the County for farmland preservation, with the money coming from lot sales at Chrin's planned industrial park. The County's video of the meeting (1:06:00) shows Dietrich writing and handing this note to Ann McHale. She can be heard agreeing with whatever is written.

"Anything you could share with us, Mr. Deitrich?" asked Angle.

"No. That was between he and I," answered McHale, as Dietrich remained mute.

Having been informed that Dietrich had accused Angle in that note of bribery, this freelance reporter filed a Right-to-Know request for the note or a reasonable facsimile the very next day, claiming that when one Council member accuses another of bribery during a public meeting, the public has a right to know about it.  Council refused, claiming (1) the note does not exist; (2) if it does, it is not a public record; and (3) if it is a public record, it's exempt.

But the Office of Open Records (2011-1406_OHare-Northampton_County.pdf) disagreed, ordering Dietrich to produce the note, which is what forced Council behind closed doors on December 8, as they decided what to do.

When they emerged from the back room, Council Solicitor Phil Lauer announced that Council had reached a "consensus" and had apparently directed him, behind closed doors, to appeal the Open Records determination.  But because the Sunshine Act requires all official actions to be taken during a public meeting, this freelance reporter objected to a perceived violation, as specifically authorized under the open meetings law.

When Council was forced to vote in the open, the supposed "consensus" evaporated. Only Council President John Cusick and Lamont McClure authorized the Solicitor to appeal, with Dietrich and McHale abstaining.
Posted by Bernie O'Hare at 12/09/2011 12:02:00 PM

Will the facsimile say something like "That corpulent blowhard is an asshole?"

no, it will say "anonymous commentors on O'Hare's blog are assholes"

Bernie, who is more spineless, us anonymous commentators, or Cusick??

The note said, "OMG. You have nice cankles. May I buy you dinner? Do you think Bernie is watching us? LOL. TTYL."

Actually, the ote was one in which a Council member accused another council member of bribery during a public meeting. That is something the public has every right to know. Not much point to an open records law if something like tha can be kept secret.

In addition, right after this, there was a "consensus" directing ther Solicitor to appeal. This was reached in the back room, away from the spotlight of public scrutiny.

Aazing how that consensus vanished into thin air when I pointed out theSunshine Act violation and insisted n a public vote.

Governmentbehind closed doors or in secret undermines ublic confidence and leads to corruption.

The way this has been handled, from beginning to end, is shameful.

And the person hiding behind Ann McHale's skirt, TmDietrich, needs to man up.

Cusick has a spine, and i respect his decision to vote for an appeal. But not much of a personality in that guy.

Bernie, you are commended for speaking up and alerting council to this breach of the Sunshine Law. If you weren't at the meeting I doubt that anyone else would have challenged them. Your initiative was real democracy in action!

So your gonna get a note or a reasonable copy that says what we all know... Angle is no good and his fellow councilmen agree... This is newsworthy? How about Barron and Angle beating you up and down the block all of 2011... That's newsworthy.

"So your gonna get a note or a reasonable copy that says what we all know... Angle is no good and his fellow councilmen agree... This is newsworthy?"

Whether it it newsworthy is irrelevant. What is relevant is that the public has a right to know when one Councilman accuses another of bribery during a public meeting. So does the businessman who allegedly engaged in the bribery. I can think of few kinds of information more relevant than an accusation of public corruption, made during a public meeting. If untrue, the statement is also defamatory.

Like you and Angle never lie and defame people! Hello pot it's the kettle...

So the Chrin TIF cajole decision in executive session didnt violate the Sunshine Law? Perhaps any TIF agreement should be challenged as it is based on deliberations done in private.

Where is the squealing public indignation on that? Oh, I forget, you are the head of the former councilman's propaganda machine who can I mean could do no wrong.

You are a joke.

You can call me a joke for insisting on transparency, but the real joke are assholes on Council like you, who will make comments anonymously and never wil have any transparency.

The joke is how you pick and chose the "transparency" issues you go after.

Keep it up. I think Till and Owens will make you an editor. the way you arbitrarily go after people would make you a perfect fit on the Easton Express editorial board.

In the Chrin case, Angle was authorized, in an executive session, to speak to Chrin about the acquisition of real estate. I did not object to that Sunshine Act violation bc I did not know it had happened. Later, when I learned it did happen, I did write about it and did state that this is arguably a Sunshine Act violation, which was later ratified by a vote on the agreement with Chrin.

The real joke is assholes like you, who try to justify a lack of transparency by saying i don't catch everything. Of course I don't. That's why we need more transparency, not less. And that's why people like you don't belong anywhere near government.

This would be over if Dietrich had disclosed the contents of the note, apologized,and moved on. He doesn`t have the smarts or maturity to do so .

He did, both he and Ms. McHale said the note was about if she liked mashed potatoes or not. Anyone who says differently is crazy and lying.

Yeah up your butt too.

Sort of like the secret pay to play mneeting between Angle, Stoffa and Chrin, maybe?

Really? I've never met Chrin and would not know him if I fell over him.

Speaking of Sunshine Law and transparency...

Bernie...you have a fair history of exposing wrong-doings in local gov't.

But, let's look at how local government has failed to cite, reign in - or even acknowledge - some of the flagrant violations of EPA standards that are going on in our backyards.

Center for Public Integrity, together with NPR, just released a report/map of "Poisoned Places" across the country.

Take a gander at our local area (you might want to look closely at a few in Nazareth):

Some of them have been emitting toxins unchecked...and unregulated...since at least 2001. Which, of course, is not only making its way into our lungs, but into the streams and ground water as well.

The actual EPA emission reports are public information...and can be viewed by clicking on the dot over the company.

How long do these businesses expect to silently get away with this?

Thanks for the link. It's terrific and there are 3 places in my zip code alone. Two of them, ESSROC, are constantly being cited by EPA. But let me ask - how does local government cite, reign in - or even acknowledge - some of the flagrant violations of EPA standards that are going on in our backyards? I believe this falls under the state and federal governments. I'm not being a wise ass. I'd like to know what local government can do.

Usually, if there is a something questionable and the local government is paying attention - they can contact these agencies (ex. DEP, EPA) and they send out the northeast rep. to check it out and if need be get involved.

You're right; that's the first assumption - that it falls under the aegis of state and federal authority. But, it's not mutually exclusive.

If you search NPR's coverage, you'll see why. The economy has stretched manpower resources - and the EPA and state organizations are virtually strapped to follow up on any but the most egregious violaters (usually the ones that receive publicity). The best example of the worst offenders in the area -- that's received publicity...is the landfill off of Rte 78. The fill had literally been listed on the Superfund site in the past, but violations were still going on - and they planned to expand. In that case, local residents finally pulled together and said they'd had enough -- brought it to the township level, and got some action.

If the business isn't making headlines, they basically go undetected. WHEN THE PUBLIC KNOWS... they have the option to take action.

Bottom line: local politicians LIVE HERE.. and have every right to question any violations of emissions. Not to mention, one would think they'd have a vested interest in what's going on in their own backyard (unless, of course, the ubiquitous dollar comes into the picture).

Right now, most of these businesses are "policing themselves", b/c there isn't the manpower to monitor and shackle them.


"..Cleanups, however, have been delayed by tension between the EPA and state environment programs, budget cuts and a system that allows companies to estimate their own toxic emissions...

...Tensions between the EPA and the states also often get in the way of timely enforcement, says Richard Alonso, a corporate lawyer who used to lead EPA's air pollution enforcement against facilities...

Alonso says that was a big reason that the agency needed the watch list. For example, Alonso remembers that while he was at the agency, an EPA regional office started investigating an industry in a particular state.

'Within a week, the state commissioner was up at EPA headquarters saying, What are you doing in my state? Get out of here. These are my sources. I'm dealing with them,' Alonso recalls.

Alonso says it's not surprising that some states balk when the federal government wants them to force companies to spend millions of dollars on pollution controls. States rely on companies to provide jobs and tax revenue."

hmmmm. what a novel dilemma.

I've posted a blog about your concerns, and will look into it.

Already beat you to it.

Dude, i posted a separate blog the very next day, quoting your comment. Do you want me to link to my own blog?

"Dood".. since I don't regularly read your blog, the only link I have is to this topic.

Your comment that you "posted it in a separate blog" as opposed to "giving it its own post" made me think you had a separate blog for other topics (which, as a matter of fact, I do).

In either case, good coverage.

Hopefully, one or two non-knuckleheads will actually take it seriously.