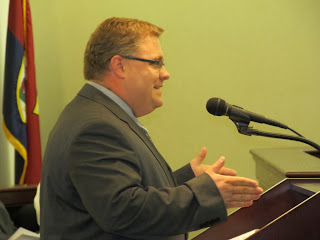 On Monday, I told you that Northampton County Controller Steve Barron snubbed a crime victim, Susan Eagle, who is still waiting for restitution from a break-in at her home eleven years ago. Yesterday, I posted Barron's attempt at damage control, which was refuted by the crime victim herself.

During this time, Northampton County Executive John Stoffa asked his administrative director, Tom Harp, to see what he could do. As it turns out, Tom was able to do a lot.

Yesterday afternoon, Stoffa reported to County Council about the Eagle case, blasting Barron for injecting himself in a matter that is beyond the scope of his duties as Controller, and then mucking it up.

Stoffa's Report to Council: At last week`s council meeting a woman named Susan Eagle appeared and testified under courtesy of the floor in regard to her difficulty in getting restitution for crimes committed against her. I asked [Direcotor of Administration]  Tom Harp to see what he could do to help her. His report is detailed below. What is unfortunate about this case is that it was never referred to the criminal division for assistance by the only one who had contact with Susan at that point - Mr Barron. Mr Barron, the county controller, decided to handle it on his own, basically delving into an administrative matter, which in my opinion, he should not have done. It is unfortunate that members of the audience or those viewing might have assumed this to be a short coming of our criminal division staff … it was not! If any of you have any questions about this please let me know.

Tom Harp's Report: Since we first learned of the Susan Eagle restitution situation our office has facilitated a number of actions that hopefully will result in a successful resolution. I have personally spoken with Ms. Eagle on at least 6 occasions and we have exchanged several e-mails. She has provided us with several new “leads” relating to the whereabouts of Stuart Bonds, case 2005-1633 who is believed to be living in Newark, N.J. There is an open bench warrant on Mr. Pagan. The addresses provided by Ms. Eagle were forwarded to Sergeant Orchulli, who handles warrants for the Sheriff’s office. Sgt. Orchulli was provided with Ms. Eagle’s cell number and called her yesterday. In addition I have been communicating with both Leigh Ann Fischer, Clerk of Courts in the Criminal Division and Archie Disidore, Director of Court Services about Ms. Eagle’s restitution claims. Leigh Ann advised us that Stuart Bonds had failed to appear for a parole violation on 8/1/08 which instituted the bench warrant. She contacted Marie Bartosh in the probation office who confirmed that Mr. Bonds is still on probation and there is still an open bench warrant on him. Regarding the other individual owing restitution to Ms. Eagle, Bolivar Pagan, JV248-2000 Leigh Ann contacted Michele Zito in the juvenile probation office who indicating that a judgment has been filed against Mr. Pagan. Ms. Eagle provided me with information that Mr. Pagan is currently residing in Allentown, and is on adult probation in Lehigh County. Leigh Ann will forward this information on to our probation office to see if we can work together with them to facilitated her restitution.

Ms. Eagle has asked that we delay referring the Pagan restitution matter to MRS, our collection agency since Sgt. Orchulli has some promising leads that may be fruitful. But she is aware that is an option if other methods begin to fail. I have advised Ms. Eagle that Leigh Ann will now be her primary contact for her restitution matters. She may also contact Sgt. Orchulli with information that could lead to the serving of Mr. Pagan’s bench warrant.

In 8 months Ms. Eagle will still have no money as this guy if picked up will be locked up and not able to work. Also I'm sure he's gonna be moving now as his information was all over this blog and he has been alterted people are looking! Well done Northampton County... Well done!

Yeah, I'm sure he's on this blog every day.

Harp did what Barron promised to do. Harp is a public servant not looking to run for office. Barron is a political hack looking past his job to the next office he can run for.

How the Hell did this incompetent bozo ever get this job.

see what a little cooperation will do? now get your act together, form a task force and go after the rest of the deadbeats

Will Soffa and Harp pay as much attention to all the other people in the same boat as Ms. Harp? Or are they running with the ball that you so very kindly tossed to them? No brainer!

Barron is too busy working as a union lobbyist paid by the taxpayers.

All of the Administration's (Sheriff and Criminal Division) efforts will be for naught, until the Courts take back their responsibility to oversee costs and fines. They close their files out and relinguish (wring their hands of) the collections to the Criminal Division. The Clerk of Court DOES NOT have the authority to enforce any action. Only the Court has that authority through their Probation Department. Additionally, the Sheriff's Department's hands are tied with bench warrants that are for costs and fines. The District Attorney will not extradite from another county on costs and fines. So the criminals will just move. The Courts and the DA must change in order for costs and fines to be collected.

You're not confused. Barron did nothing. I have confirmed that myself.

Who did you confirm it with?

I have conformed that with the Clerk herself. Barron did nada. Zip.

Bernie as a vindictive long Dem, I fear you put Clerk in danger. Barron and his gang will no doubt try to get her fired or in some sort of trouble.

Remember this guy is worse than Reibman and Callahan combined and he has less talent than either one of them. Scary thought.

you owe m3 3 bucks for using my words

barron may have done nothing which isn't right, but Harp looks like a savior, but in reality, this woman will never see her money. hate to say

In this matter Stoffa is right. Barron again pretending to be an administrator and doing it badly, as usual.