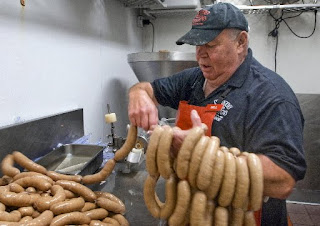 In my post about bottom-feeding bloggers yesterday, someone observed that people don't really care about government and that's why newspapers give it such scant coverage. I responded by noting that if you take no interest in your government, your government still has an annoying way of taking an interest in you. That's why a democracy needs a free and independent press, and not one that is increasingly distracted by what really can only be described as mindless bullshit like American Idol or Dancing With the Stars.

I followed that up by using Morning Call columnist Bill White (who likes American Idol and Dancing With the Stars) as an example. I pointed to his recent columns about Congressional redistricting (Never vote for these Lehigh Valley Traitors, One issue voting? Yes, if it's ethics), noted I agree with him, but asked, "[W]here was he a few years ago, when redistricting reform was attempted? Where was I? Where was any of us?"

Apparently, he was writing about it, and has been doing so pretty consistently, and as long ago as 1991.

A slightly perturbed White emailed me a baker's dozen of columns he wrote about redistricting reform, convincingly establishing that I'm full of shit.

Although my remark was made in a casual comment, and not on an actual blog posting, I feel I owe it to him and everyone else to point out that I had my facts wrong on this issue. But I still insist that, in a democracy, newspapers and their columnists have an obligation to tell us what is going on inside government.

You can't do that while simultaneously writing four columns about the food at Musikfest.
Posted by Bernie O'Hare at 1/04/2012 01:24:00 AM

Not sure there is a counter argument to this. The fourth estate and freedom of the press was supposed to be how citizens stayed in control of their government. An informed populace and all of that. Worried about the overall apathy.

The MC and practically it's entire staff is nothing but a joke. I think they get their news from WAEB.

Although BO can be a real stinker and very bias, at least he shows up and reports.

for someone who submits community players to his hall of fame (shame), mr. white appears quite sensitive, especially considering he prints nominations from the public. although he claims that being included is not negative, that's the public perception. for someone who allots so much column space to repetitive themes, he seems quite sensitive.
bill(white), sorry to take you to task again, but i'm somewhat disenchanted with the morning call's double standards. on that note, consider the charles snelling's excellent reply to your traitor column. you took the liberty of reprinting your column next to his reply, and then countering it in a second column; three entries to his one. here in the blogosphere, the last word is more difficult to hog.

Charlie Snelling's column on Redistricting was far from excellent..In fact it was a pathetic joke..Snelling has been a Republican hack for years..Of course he had no problem with the republicans gerrymandering the state to turn it into a one party dictatorship..However, Snelling wouldnt have sang the same tune had the Dems done the same thing..White's response to Snelling was actually mild..

Bill White is a schmuck.

Like anybody cares what some doofus who writes about Christams lights and Carnival junk food thinks.

The Morning Call's bottom line speaks volumes with respect to what people REALLY feel about TMC's obvious agenda, I contend.

rolf, i disagree, white's a smart guy, but somewhat full of himself. for example, apparently he reads the blogs and comments, but won't dialogue with us amateurs. he also sees nothing wrong with using material from a blog without attribution, as long as the information is independently verified.

Does the MC serve NorCo anymore? Tim Holden is more familiar with NorCo than anyone at the Call, a paper that used to routinely embarrass the Express by scooping Easton stories.

Speaking of newspapers, you'll enjoy the op-ed piece in the Reading Eagle regarding the new mayor of Reading and his political consultant, Mike Fleck.

Again, I will point to The Morning Call's bottom line to dispute any claims of genius on Turkey Hunting Traitors' part.

Bill White is and has been, for quite some time, Dancing With The Stars / American Idol personified to the Nth degree.

I would have an exceptionally hard time believing I stand on an island alone in this assessment although, if I am the only one with the guts to say so public, that would not surprise me one bit in this day and age of Political Correctness at alll costs.

Anonymous said...
I work for a newspaper in the area. I go to many sources for fact and opinion about politics. Yours is one of them. I think the 'bottom feeder' designation is quite a bit over the top. I may disagree with you, you may even be wrong, but I check other sources, too. As should everybody, on every subject. It's not that you're not to be trusted; it's that a person who is interested in politics should trust no one, as the X-Files used to say.
Anyway I'm glad you're writing, and I'll keep reading as long as you're writing about the Lehigh Valley.

michael molovinsky said...
anon 11:11, the morning call has harvested a number of idea's from my blog with no mention or attribution. they have even lifted an exclusive story, and attributed to a" local blogger" without using my name or blog title. the recent story by paul muschick about the taser incident, and utube video, avoids mentioning bernie, while the morning call reporter manuel gomez, got the utube from bernie. are you guys that insecure about your jobs that you find this justifiable? i suppose you are, considering you commented anonymously. i'm going to take your comment, and mine, and cut and paste it onto the current post, where it belongs.

I only read White for comic relief.
At one point I was so annoyed with his prose I approached him at M-fest prepared to verbally assault him with ridicule.
I was with my family, I ended up wimping out, to avoid embarrassment I showered him with faux accolades. Now after reading his column I find I am the one who needs a shower.
He lost his mojo long ago.

Must be a good thing I'm not in your family as Faux Accolades would have created embarassment for ME.

Genuine courage and conviction usually never has a whole lot, if anything, to do with wimping out.

No wonder Mr. Molovinsky finds Turkey Hunting Traitors (on the front page, no less) "somewhat full of himself".

I wonder how many others have 'wimped out' in the presence of the great Bill White over the years ...

Sincerely If Not Politically Correctfully Yours,

You must be popular, this site seems to be a mirror of your site.

Who is Bill White?

Bernie,
You still provide the most honest political and government coverage in the Valley.

Plus I don't have to pay to read your superior accounts like I do the Morning Call.

Not to mention you are light years ahead of other LV blogs in news. (You don't just talk about crimes in one city and play babe of the woods about another one your partial to).

Plus you do REAL journalism, which is more than saying, "Here is what the Morning Call said, and here is the subject's Facebook page".

White is the victim of the corporate media homogenization, in his defense. As the late great American philosopher George Carlin said; that bullshit the media covers,"is what our owners want us to hear."

Bill White is a mere body at a rag of a so called newspaper...

In fairness, I do think Bill is an excellent writer, and I did have my facts wrong. He was correct to point it out. I enjoy reading him and do not share the disdain some of you have for him. I'll add that I agree with his columns about Congressional redistricting, although I'm not ready to lynch anyone over it.

Bill will eventually find fault with everyone. He lives in a perfect world. He is nearing the end of a great career that is yellowing. He should get out as soon as he can and eat his way acros the lehigh valley eating hot dogs.