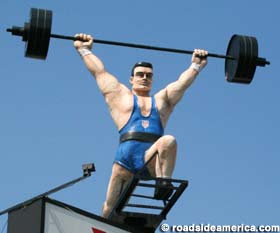 Dirty politics is the American way. We can trace its history back to the presidential contest of 1828. Andrew Jackson's forces accused John Quincy Adams of pimping for the Russian Czar, while Adams' minions claimed Jackson's wife was a bigamist and his mother a whore. No sooner had Jackson been elected than his wife dropped dead of a heart attack. Today, we'd call that collateral damage.
Northampton County mudslinging certainly follows the distinguished pattern set by The American Lion. We're about to go into an election cycle next year for county executive and council. So it's no surprise that the anonymous attacks are already starting. John Cusick, up for re-election to county council next year, was attacked Monday for his "extensive" county council travelling. Oh yeah, I'm a phony for failing to write about his junkets.

I've found out how much money has been paid to each council member for official travel over the past three years. Only three of its nine members even bothered with exciting trips to places like Harrisburg and York. Ron Angle was reimbursed $103.20 for one trip in 2005. Diane Neiper picked up $362.90 for six trips. John Cusick was paid the most, $2,228.37. But that was for thirteen trips to exotic locations like Sinking Springs. No trips to Cancun. No limos. In Cusick's case, it comes down to a whopping $171 for each trip.

In an email, Cusick explains his attendance.

Over the last three years, I have regularly attended CCAP's spring, summer, and fall meetings. I've used my personal days to attend the meetings in the fall (Hershey) and spring (Harrisburg) and my summer vacation time to attend the annual meetings (York, King of Prussia, and Seven Springs). I am a member of the CCAP Taxation and Assessment Committee which develops policy initiatives and a platform. Attendance at these meetings has afforded me the opportunity to meet and discuss issues facing county governments across the Commonwealth of Pennsylvania. I was able to learn from Commissioners in other counties about their Health Departments (Bucks, Montgomery, Erie), Gaming issues (Erie, Monroe, Bucks), Prison expansions, Open Space programs, Reassessments, Open Records, etc. I certainly believe the subject matter I have been exposed to and the relationships I have developed through CCAP are invaluable and have made me a better County Council member. I would encourage all Commissioners and Councilmembers to attend these meetings. Lehigh County usually has several of their Commissioners at these meetings, but unfortunately, the only other Northampton County official who regularly attends is our County Executive, John Stoffa.

In addition to the CCAP meetings, I have taken classes offered thru the Academy for Excellence in County Government. This would include workshops in County Functions and Responsibilities, Financial Management, Personnel and Labor Relations, Innovative Approaches in County Government, and numerous elective credits offered at regular meetings on various topics related to County Government. Classes were usually in Harrisburg or Penn State and I was reimbursed for mileage and hotels as per county rates and policies. I've never gotten a tan anywhere I've been.

As one lady who regulary follows council said to me, "I wish they'd all go these meetings." I agree.

Last week, I published my annual report about the workhorses and showhorses on Northampton County Council. Republican John Cusick and Democrat Diane Neiper stand out as the council members who attend the most committee meetings, far more than any of their colleagues. It is no surprise to me to see that these two council members are the ones most willing to learn about county issues.
Posted by Bernie O'Hare at 12/31/2008 12:02:00 AM

If this was McClure or Dertinger, O'Hare would say it was a waste of money and time and showboating. It pays to 'pay to play' with O'Hare.

I think it is about time that someone went to Harrisburg and read the files on Bernie O'Hare and why he was disbarred. The entire file should be posted on the Internet for all to read. Then peple could make up their own minds about "Honest" O'Hare. It's not what you say, it is what you do do. Whaddaya Say, Boonie, what would you do? How would you spin your fraud? Blame the Booze? I doubt you will ever take responsibility, you will switch the target, and blame your detractors.

If you do go to Harrisburg, please stop at the Troegs brewery for a tour. One of the most lively and fulfilling tours you will ever take.

And samples are given at the end.

for what it's worth I wouldnt delete these attacks, afterall they arent exactly anonymous, we all know who it is.

Being a County employee, I have absolutely NO problem with any of members attending a conference in the State of PA. I think more of them should attend a few meetings.

Although I don't always agree with Bernie when it comes to his opinions of the County Executive and some Council Members, the last writer is way off base. Stick to topic at hand. You're doing a great job Bernie!

No longer in the Library...

Villa, if you do go to Harrisburg, there's a very large bridge that you'll have to traverse... be careful on it, bridges freeze before main roads you know. OK that said, once over the bridge take the first exit and first left after that. On the corner there's a deli that makes the best sourdough bread, pick me up a loaf if you could. Much appreciated.

OHare was disbarred for excessive flatulence.

Actually, he wasn't ever disbarred...but don't let the facts get in the way of your fun.

Buddy, the maroon who posted those personal slams is NOT Villa. I get them ALL the time, usually when I hit a nerve. Flack is always heaviest when you're over the target.

Besides, you and I both know that that legal suspension is nothing. Wait until they find out how often I abused you.

I agree withthe first county worker. BO loves Stoffa and Angle, but he's right about this. What is wrong with Council members like Cusick and Neiper attending CCAP conferences? More of them should do it.

I'm shaking so much I can barely type. Just thinking about the beatings makes me wet myself.

This seems fair, but I wonder how you would feel if a state legislator went to a conference in DC or another part of the country. Every time one of those conferences take place we see newspaper reports about how horrible it is. What's your take?

I don't think we should go off topic and talk about Boonie selling his clients' out and forging their signatures for a pepperoni pizza. This is about John Cusick's travel at taxpayers expense. There are two reasonable sides to this and Boonie has just chosen to take Cusick's.

If taxpayers are spending thousands to send officials to plus spas or resort destinations for "conferences," I'd be as busy as a one armed bricklayer in Baghdad writing about it.

But for Christ's sake, this is frickin' York! Or Harrisburg. It's hard for me to get excited about that.

This was an attempt to manufacture an issue that does not exist.

What about all the cabinet members and what they are doing? Some are chargeing Christmas stuff.

Burne - that's a good point. What about Stoffa. What has he spent traveling ? The Cabinet people. What have they spent ? Might make Cusick look reasonable. What is this about Christmas gifts ?

On Monday, the bogus claim was about Cusick's travel. Now it is Stoffa. Why don't you give it a rest?

Those trips are not Junkets. Junkets are trips like those paid for by Allentown taxpayers to send then City Council member Gail Hoover 1st class to San Francisico for a gay/lesbian real estate conference.

I think the Christmas stuff is just the things some cabinet members volunteer to do at the Courthouse. Marcus strings some lights, Conklin lays out Holly, Stoffa tells Christmas stories, etc.

Excellent history references! Whatever happened to those Whig guys anyway?

Hey O'Hare you deleted a posting I saw earlier from a County employee, whats up with that.

I don't know whether the comment in question is from a county employee, union thug or hack. But it made an anonymous personal attack against two county employees and was deleted. You are probably the person who made the attack so you know damn well why you were deleted and I will continue to delete personal slams at people who work for the county. Grow up.