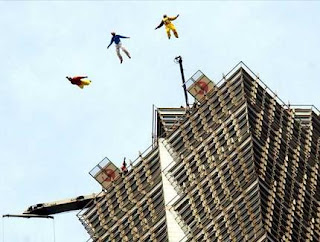 "Why are you shaking your head?"

That was the exchange yesterday between Northampton County Executive John Stoffa and Council member Charles Dertinger. In his laconic way, Stoffa was telling seven members of Northampton County Council (Dowd and McClure were absent) how he felt about Council member Cusick's idea of floating a $26 million bond next year for an ambitious list of capital projects. Stoffa prefers a smaller, $8 million bond, mostly to cover the cost of a new juvenile justice center. As he explains it, "We're trying to pay as you go rather than borrowing. It's not the time to be borrowing."
While Stoffa spoke, Dertinger was shaking his head. But he gave that grade school excuse about a crick in his neck for one and only one reason - The Eye of Mordor was in the house! That's right, folks. Morning Call columnist Bill White, whose name strikes fear in the hearts of local pols, was at a Northampton County Council budget hearing.

Maybe he has trouble sleeping.

The second I saw Bill, I plopped my fat ass right next to him, blocking his quick exit. He's actually a very nice guy, just like me. But council members were still on their very best behavior, nervously glancing at Bill from time to time, especially when he would pull out his official notepad. They were really trying to avoid the constant outbursts and petty behavior that have made them the most dysfunctional legislative body on the planet. They don't want to end up in the Hall of Fame like Angle.

But Angle could care less. You see, he's still really miffed at Bill's blog slamming him for being "utterly ineffective" when it comes to "forging coalitions and getting things done." Bill knows it, too. Right before attending yesterday's budget hearing, he said, "I’m off to be publically berated by Ron Angle."

Publically? Is that the opposite of privateally?

Angle actually ignored Bill, but pretty much proved Bill's point. Angle is clearly exasperated. Like Stoffa, he opposes a $26 million bond in this economic climate. "It's the wrong time to be floating big bonds." But aside from Peg Ferraro, council is pretty much oblivious to financial concerns. Dertinger, for example, insists that council should be doing all sorts of things. "At one point or another, we've got to do something."

Why? Does he want his name on a plaque?

Council members whittled things down to a $13 million bond to include a new parking lot at Gracedale, even though Director of Administration John Conklin had just told them the county won't be doing that project for another year. Upper Nazareth Township zoning officials want things done their way, and that will take time. So if this bond is ever floated, we'll be paying debt service on proceeds that are just sitting in the till, collecting dust.

Frustrated by a council hellbent on spending money, Angle eventually took his papers and chucked them into a nearby waste basket. "I'm wasting my time here," he said. Off he went. I think he jumped off the courthouse roof.

Angle missed Diane Neiper's amazing proposal. After advocating spending money we don't have for things we don't need, Neiper proposed sticking $2.7 million of operating expenses in council's slush fund, politely called a contingency fund. When a department wants a new copy machine or rolls of toilet paper, it can come up and request it from council. She wants to do this to "send a message" to county employees. What message is that? That you're nuts? I think they already got that message.

As the meeting ended, with a whimper, my cell phone was ringing. Ron Angle, who survived his jump from the courthouse roof, had a message for Bill White. "Tell him he works for a bankrupt paper."
Update: Ron takes a few swings at Bill White in today's Morning Call, and blogger Michael Molovinsky states anyone who can do that while simultaneously defending Emma Tropiano is OK with him.
Posted by Bernie O'Hare at 12/10/2008 12:40:00 AM

actually floating a bond in these time might be exactly the thing to do. there is serious debate amongst economists about government, deficits, and the economy. most agree that the time to spend money on capital projects is when the economy is in the tank.

6:10, borrowing and spending (many times over budget spending) is what got us into this mess in addition to the shit for brain financial so called experts anything goes strategies.

On Bill White's attendance, the Mcall is in financial dire straights as well and he is the low man on the totem pole but that's a good thing as we can now expect quality news reporting as it should be but on the flip side, the editors need not add their 2 cents and screw up good reporters words...

today's opinion page has angles reply to white's blog (i address it on my blog), is it possible white saw it's contents before today that berated him for not attending meetings? a coincidence?

It's important to pay close attention. Right now, the bond market is bad. And even if the time is right, the county should not spend millions at a time when it is not ready to handle the load. The county has one engineer. Steve DeSalva is very good, but he's only one person. His view should dictate the pace.

Michael, I read your Angle blog. Do you bastards have some sort of club? If so, can I join?

Bill White is a very nice guy, just like you? Wow, when did that happen? Or is that a New Years resolution of yours?

Yeah, I'm probably the nicest guy in the world.

Next to Ron Angle, right?

Bernie, I love Ron's comment, "Tell him he works for a bankrupt paper."
One of these days someone from inside the call will have to state, the reason we are in trouble is because we print a liberal rag.
By the way, from the number of the full page ads in the call today they must be running a firesale. I'll bet that when someone contacts the call the first question the call asks is, quarter page, half page or full page, the price is the same.
Bob Romancheck

I enjoyed Ron's response, too. However, I hope TMC refrains from writing more garbage just to encourage responses from those they are attacking.

I must re-recommend the 13-week free subscription plan from the MC. Take the free subscription and don't sign up at the end. They'll call you for another 13 weeks in just a couple of weeks. Get the ball rolling by canceling your subscription. They have a "get 'em back" sales program and will be in touch shortly. Smite all bankrupt liberal rags! Hoist them by their own petard! Their baseball box scores are microscopic eye charts anyway. To hell with them! Who gives a shit about Mark Trail and rednecks with wacky Christmas light displays.

I might be tempted to try that, but I doubt I'd get the paper anyway. When I was a subscriber, they managed about a 75% success rate. Calls to the subscriber line yielded some strange accented folks (not hispanic) who sounded like they were speaking from the back of a cave. Just for grins, I thought about telling them my address was 1600 Pennsylvania Ave.

Funny thing, after I finally canceled, as you said, I got call after call begging me to resubscribe. Funny thing, those calls were from an "amerikun".

The one that endorsed no presidential candidate and wrapped their election day paper in a bag that said "Defend Freedom, Defeat Obama?" THAT liberal rag?

A single quote from the ancient Greek rhetorician Isocrates: "Our democracy is self-destructing, because it abused the right to freedom and equality, because it taught people to consider impudence as a right, illegality as freedom, rudeness as equality and anarchy as happiness."

Does this sound like an countries we know of?

Borrowing and spending, taxing and spending, the root problem is spending. We need to spend money on services the county is required to provide, and best yet, provide those services at a great value for the money spent. However, the council's motive to spend for the sake of spending troubles me, and I hope it angers more than just Angle here.